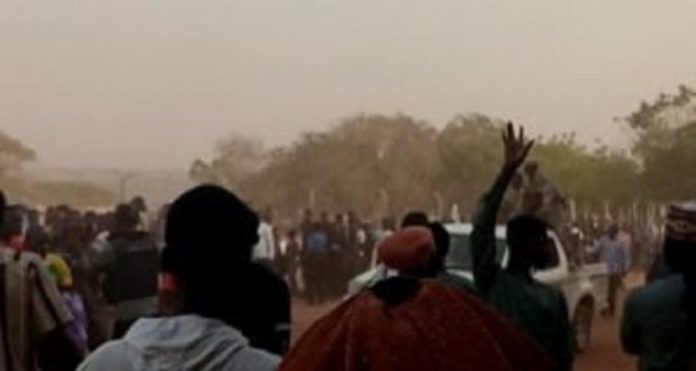 The Deputy Governor of Kwara, Mr Kayode Alabi, was on Saturday whisked away by security operatives when players (students) of Nuhu Bamali Polytechnic, Zaria, following a pandemonium at the closing ceremony of this year’s NIPOGA in Ilorin.

Spectators and other delegates scampered for safety when the Zaria contingent attacked match officials after the final whistle of the football event, prompting a harsh reaction from the host Kwara State Polytechnic students.

The News Agency of Nigeria (NAN) reports that the final was between Kwara State Polytechnic and Nuhu Bamali Polytechnic, Zaria, which the host won 1-0.

However, pandemonium started the players attacked the central referee, Adeola Salami, in the process, prompting Kwara State Polytechnic students to react with throwing of dangerous objects into the pitch after a failed attempt to gain access onto the field.

With the issue growing beyond the security operatives present for the closing ceremony, the deputy governor (Alabi) hurriedly left the scene with the help of his security aides.

NAN gathered that the central referee lost one of his watches and whistle during the assault on him, but he sustained no injuries.

The Nuhu Bamali Polytechnic students had protested the goal scored by the hosts in the 68th minute, before their reaction after the final whistle.

Reacting to the development, Mr Lekan Ogunmodede, a member of the Protest and Disciplinary for the games representing the Rector of Rufus Giwa Polytechnic, Owo, Ondo State, said such violence by the Nuhu Bamali Polytechnic students was not allowed.

He assured that the committee would handle the matter effectively without letting any of the culprits go unpunished.

Ogunmodede explained that immediately the fracas began, he approached the Rector of Kwara State Polytechnic to calm his students down and not to take laws into their hands.