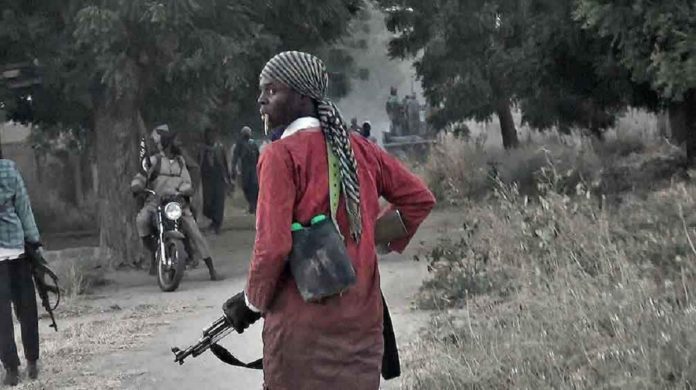 The insurgents attacked the community around 4 a.m yesterday when most of the residents were asleep, a resident told TheCable.

Abba, the source said, had been the insurgents’ target since he refused to get compromised.

The head of the civilian JTF was abducted alongside many others who are yet to be identified.

“The sporadic gunshots woke us, and everybody started running to safety,” a resident, who spoke in confidence, said.

“The insurgents came in through Ajigum Talala, a part of the forest where ISWAP has a strong unit. They headed straight to Abba’s home and took him. They have been warning him before but Abba refused to cooperate with them.

“They abducted many others who could not run. They also burnt down some property, including a vehicle belonging to the community head.”

The attack comes a week after the insurgents attacked Korongilum in Chibok, where they torched many houses.

Army spokesperson Lt.-Col. Sagir Musa could not be reached for comments.

TheCable learnt that soldiers have moved to the area.

Also, President Muhammadu Buhari yesterday advised the military to change its tactics to defeat ISWAP terrorists in the Northeast.

The President spoke at the opening of the 10th National Security seminar organised by the Alumni Association of the National Defence College (AANDEC) in Abuja.

The seminar, with the theme: Combating Insecurity in Nigeria, was in collaboration with the Office National Security Adviser (ONSA) and National Defence College (NDC).

President Buhari, who was represented by the Minister of Defence, Maj.-Gen. Bashir Magashi (retd.), said new threats in the areas of insurgency and terrorism had emerged due to the defeat of Islamic State of Iraq and Syria (ISIS).

He said security agencies had been given renewed mandate to deal mercilessly with terrorism, banditry and kidnapping.

“This is a major concern and threat to us. Their presence in the West African Sahel region poses a great danger not only to Nigeria but also to the entire region.

“Thus, we are exploring higher level of collaboration among all nations and international organisations to effectively curtail the spread of terrorism and defeat insurgency and terrorism.”

Addressing the Chairman and management board of the NEDC at its headquarters in Abuja, the governor regretted that the destruction in the 4 town was the worst he had seen in the history of Adamawa State.

“The terrorists also looted a pharmaceutical shop inside the town and destroyed houses and properties belonging to individuals, including that of the chairman of the North East Development Commission.

“Sir, we are here to seek your help and your support because the burden is too much for Adamawa State to carry alone.

“We are trying to ensure that total peace return to Garkida and its environs and we have recruited 100 vigilantes to support the military. The military has also deployed more troops in the area.

“However, we are trying to avoid the challenge of Internally Displaced Persons (IDPs). That is why we are seeking immediate and long-term interventions of the NEDC.”