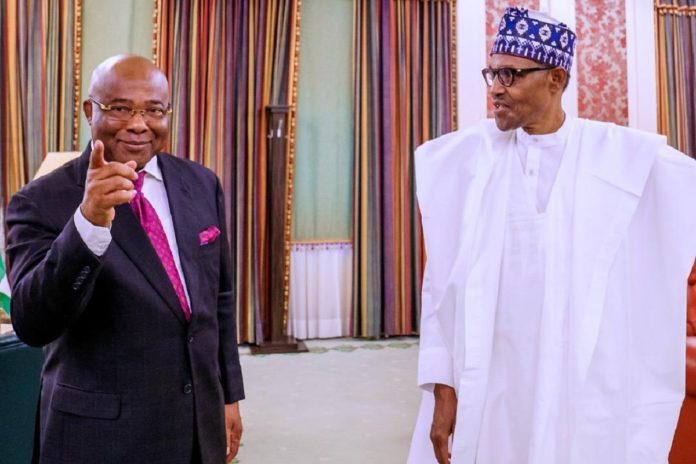 Imo State Governor, Sen. Hope Uzodinma, has called on all Nigerians not to politicize the issue of security for the overall interest of the nation.

Governor Uzodinma, while addressing newsmen at the Sam Mbakwe Int’l Cargo Airport on his return after travelling with President Mohammadu Buhari on five days working visit to Addis Ababa, stated that insecurity did not start with President Buhari and that the Government was doing its best to nip the problem in the bud. “Government is winning the war against terror as can be witnessed with the success recorded since President Buhari took over power.

“Before 2015, Boko Haram was in control of seventeen (17) Local Government Areas in Bornu State and nobody dared visit the borders of Adamawa and Yobe states. Today, the story has changed and government is in control of the three states, which is a success story; Governor Uzodinma explained.

Governor Uzodinma noted that people in the affected states are now going about their normal businesses unlike before when, in 2015, they voted from IDP camps.

He described terrorism as a global menace that requires the total support and collaboration of all citizens of any nation that wants to win the war.

“The President is resilient and determined, our armed forces are doing their best, all they need is the support and prayers of all Nigerians. I am confident that Nigeria is moving in the right direction under President Buhari”. On his working visit with the President to Addis Ababa, Governor Uzodinma explained that President Buhari led the team to discuss the issues of regional and coordinated free trade in Africa.

He stated that treaty has been signed and the Nigerian Parliament will look into it; after which, there will be a public hearing on the matter. He assured that President Buhari is not resting on his oars in his firm determination to improve on the economy, vis-à-vis the well being of Nigerians.

Shedding light on the Supreme Court review of the January 14th judgement that enthroned him as the democratically and validly elected Governor of Imo State, Governor Uzodinma said that since the matter is in court, he will not discuss it, but noted “I’m aware, as a lawmaker, that jurisdiction is given to the court by the constitution; and under 4th alteration, Section 285 (7) of the Constitution, 1999 (as amended), the Supreme Court is allowed only 60 days to adjudicate into electoral matters and 60 days have since elapsed. Going back to the Supreme Court is just a mere academic exercise”.

The Governor reiterated his firm belief in the judiciary, describing it as the pillar of our democracy that must not be ridiculed by any person or group irrespective of class or status.