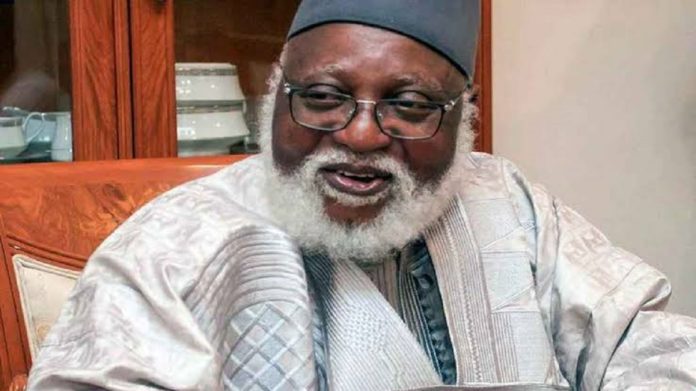 Former Nigeria Head of State, General Abdulsalami Alhaji Abubakar has appealed to all Nigerians to join  hands and put an end to the incessant security challenges that have bedevilled the country.

General Abubakar made the plea in Kaduna at the 2020 lecture and award of honours from the Sir Ahmadu Bello Memorial Foundation (SABMF) to some distinguished Nigerians that have excelled in their chosen profession.

He urged Nigerians to strive hard and ensure that they eradicate this menace of insecurity by giving information to the appropriate authorities about those involved in such acts, as they live in communities with the people.

Acknowledging  that the country is at a crossroad and requires that peace be restored through collective responsibility, General Abdulsalami Abubakar urged that all hands must  be on deck to address the issue.

Regarded as the father of the present democracy being enjoyed in the country, extolled the legacy of the late Sir Ahmadu Bello, the Premier of Northern Nigeria who pioneered the clamour for peace and unity of the country without ethnic or religious

General Abubakar commended the foundation for keeping alive the indelible mark of Sir Ahmadu Bello, pledging his full support to them as he congratulated members for the annual lectures.

Governor Abubakar Sani Bello while presenting a posthumous award to  late sunday Awoniyi commended the activities of the Sardauna foundation, which  he described as a vision that has united Nigeria.

Chairman Board of Trustees of Sir Ahmadu Bello Memorial Foundation, who is also the  former Governor of  Niger state, Dr Mu’azu Babangida Aliyu, said this year’s awardees of the Foundation are role models who have distinguished themselves in selfless services and uncommon achievements in their respective chosen profession, and which has also impacted greatly to the development of the North and Nigeria at large.

“It is beyond argument that tonight’s awardees are role models and shall remain mirrors of exemplary qualities to the present generation, and even generation yet unborn. In fact,  it is an undeniable fact that the 2020 awardees have either individually or collectively been key players in rewriting and determining the history of Nigeria”.

Recipients of the awards include former Head of State,  General Yakubu Gowon, whose  award reads “the epitome of Excellent and good leadership”. He was represented by Lt. Gen Abdulrahaman Danbazau.

A Posthumous award of Exemplary leadership and commitment to democracy and accountability was bestowed on the late President Shehu Usman Aliyu Shagari and  was presented by former Governor of Niger State, Dr Mu’azu Babangida Aliyu.

Another posthumous award was presented to the late Chief Sunday Awoniyi for his excellent service to humanity, progress and unity of Nigeria which was performed by Governor Abubakar Sani Bello of Niger State.

Responding on behalf of the awardees,  Justice Fati Abubakar described the event as  prestigious and a great honour to them,  saying that they were highly humbled.

She however added that her recognition among  great Nigerians whom she can’t stand their pedigree was indeed a rare privilege and applauded the organizers.

She then dedicated her award to her Husband who stood  by her to  ensure that she pursues a Career that has made her who she is today.

She also thanked the former Governor of Niger State and the Chairman Board of Trustee of SABMF, Dr Babangida Aliyu for his support and all other members of the foundation.

According to her, through her Non-governmental Organization, she will continue to advocate  women’s rights especially in the areas of education, empowerment and their dignity.