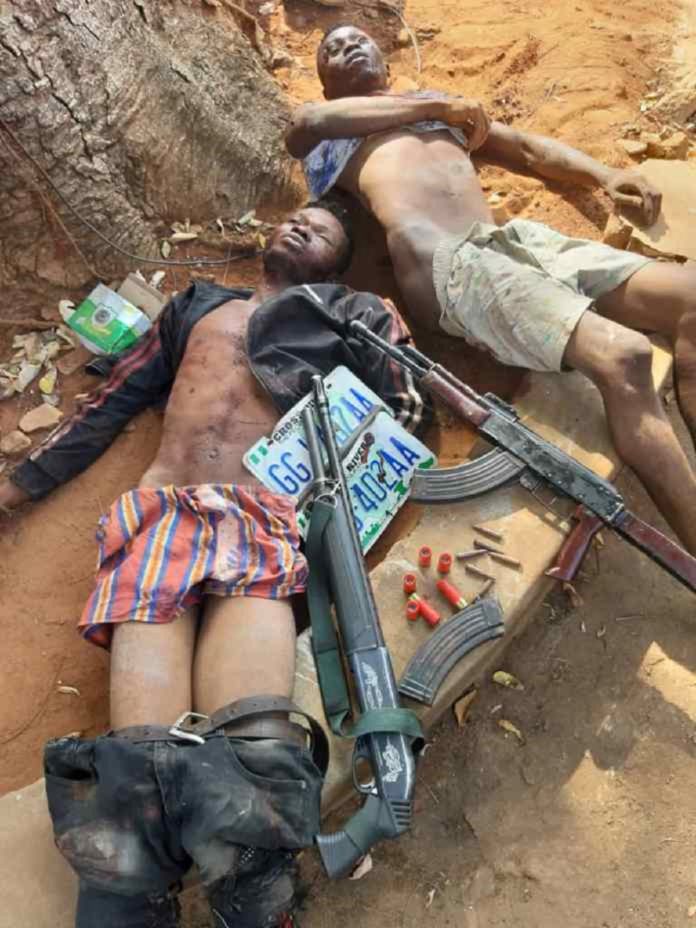 Today 13/1/2020 at about 1:15pm,Police operatives attached to the Command Special Anti Robbery Squad (SARS) responded to a distress call and stormed the hideout of a robbery gang who allegedly attacked one Chiegulem Chidera ‘m’ at Agouye Umuko Awka and snatched his Nissan Xtera jeep with Reg number Cross River GGJ 402 AA at gunpoint.

Suspects were trailed at Nkwo Agulu and on sighting the Police opened fire after which the police responded promptly. As a result,the two suspects one Onyebuchi Ngala ‘m’ aka Ceaser and Izuchukwu Okoro ‘m’ were fatally wounded during the gun encounter.

They were taken to the hospital for treatment but confirmed dead on arrival by the medical doctor. Exhibits recovered from the suspects include the snatched Xtera jeep, one Ak 47 rifle, one pump action gun, six life cartridges, four expended ammunition, five life ammunition of 7.62mm and two Ak47 magazines.

It would be recalled that the deceased suspects were also among the gang responsible for the Abduction of one Engr Emeka Chiaghana ‘m’ of Nibo on 25/10/2019. Meanwhile, case is still under investigation and effort is ongoing to locate the whereabout of the abducted victim please.