Home Reports S/East Disaster averted as another tanker crashes with 45,000 liters of petrol at... 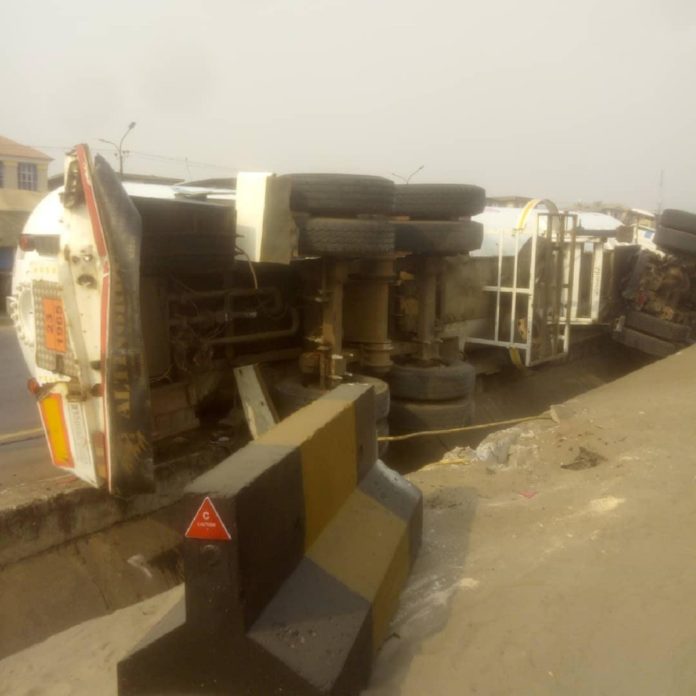 …as LPG gas tanker crashes at Upper Iweka in Onitsha

According to a statement from the state police command’s Public Relations Officer(PPRO), Haruna Mohammed, Police patrol teams led by the Nnewi Divisional Police Officer(Central  Police Station) and other sister security agencies rushed to the scene immediately they were alerted.

They quickly cordoned off the Area and diverted traffic to prevent calamity and looters from taking advantage of the situation to loot while fire service personnel equally responded and sprayed the unfortunate truck and the drainages with chemicals to prevent fire outbreak.

Preliminary investigation revealed that the driver of the truck, one Pedro Ojugbeli, aged 39years from Delta State lost control and fell while it’s contents spilled through the drainage on reaching the Traffic Light junction due to what was suspected to be brake malfunction while trying to negotiate the junction. He consequently lost control which resulted in the unfortunate crash.

According to Haruna, the situation was quickly brought under control, and no life was lost and no injury sustained while effort was on to transfer the contents and clear obstructions in order to enable free flow of traffic in the area.