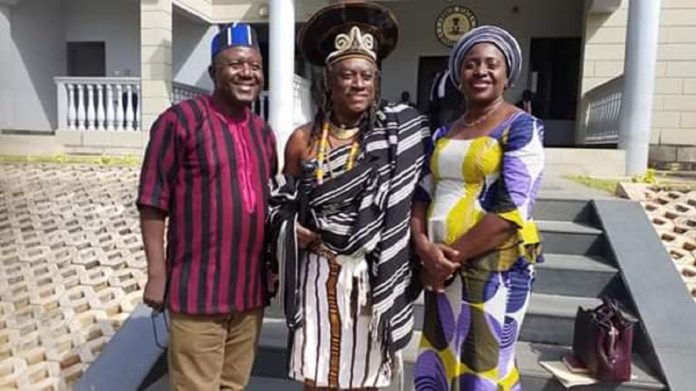 In his efforts to revive and promote various aspects of cultural festivals in the state, Benue State Governor Samuel Ortom has approved a site for the establishment of Kwagh-Hir Village in Makurdi, the Benue State capital.

Governor Ortom gave the approval when he met with the visiting Artistic Director and Chief Executive Officer of the National Troupe of Nigeria, Comrade Tar Ukoh, at the Benue Peoples (Government) House.

Kwagh-Hir, an aspect of Tiv cultural festival, is a puppet theatre featuring sculpted masquerade displays of both animal and human representations.
The Governor said the site which is contiguous to the Aminu Isah Kontagora Arts Theatre was best suited for the Village which would span the entire value-chain of the popular indigenous community theatre genre.

The Artistic Director, Comrade Ukoh expressed excitement at the development and informed the Governor that the National Troupe would collaborate with the State Ministry of Information, Culture and Tourism, as well as other local and international partners to deliver on the Kwagh-Hir Village Project.

He stated that other Culture and Tourism value-chain initiatives will also be developed to expand the self-employment and wealth creation opportunities for artistes and artisans for the world tourism window.
Mr Ukoh explained that the mandate of the National Troupe of Nigeria included the utilization of indigenous community theatre traditions and exploitation as economic assets for development.

State Commissioner of Information, Culture and Tourism Commissioner, Mrs Ngunan Addingi, who commended the Governor for what she described as his swift action on the request for the site, explained that the ministry was collaborating with the National Troupe for the development of the entire Kwagh-Hir value chain in accordance with best international practices.

She stated that previous partnerships with the troupe in 2018 and 2019 had recorded huge successes in the staging of Kwagh-Hir and Swange festivals hence the need to deepen the collaboration.

It will be recalled that Kwagh-Hir was inscribed on the representative list of the United Nations Educational, Scientific and Cultural Organization’s Intangible Cultural Heritage for Humanity in December last year.