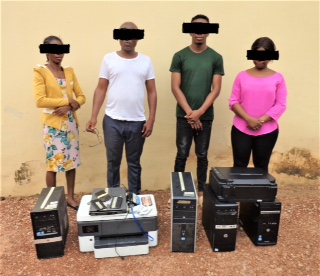 The Enugu zonal office of the Economic and Financial Crimes Commission, has arrested 4 suspected fraudsters. They were picked up at shop 22, Image Digital Studio, Jo-Josh Mall, Ikenegbu,Owerri, Imo State following intelligence that the suspects were operating an illegal business centre which specializes in the procurement and sale of forged documents. They allegedly edit and sell documents of multinational companies, identity cards of Nigerian and foreign banks and photographs of foreigners to unidentified internet fraudsters.

The suspects have made useful statements and will be charged to court as soon as investigation is concluded.