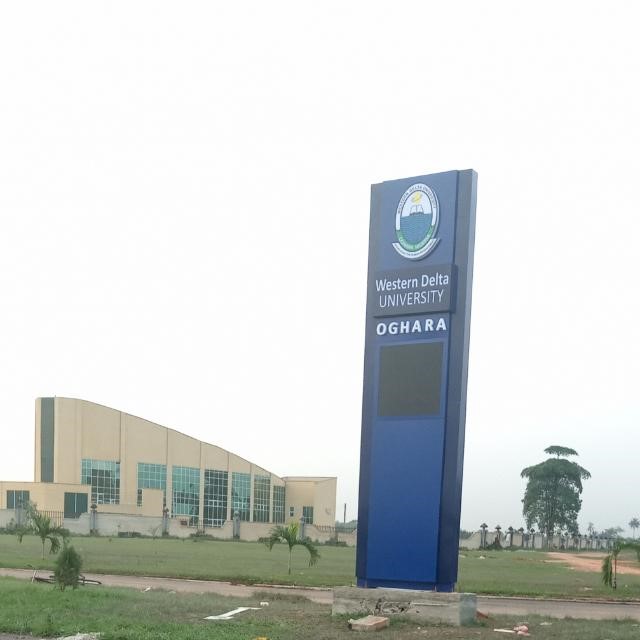 The Delta state Commissioner for Higher Education, Prof. Patrick Mouboghare, Tuesday, commended the Western Delta University, WDU, Oghara, Ethiope West LGA, Delta state, for its giant strides since it was founded over a decade ago. Apart from WDU’s having graduated students as at when due without missing a year since it was founded, he praised WDU for having moved fully into its permanent sit, unlike many older universities.

He spoke at the commissioning of the university’s ultra-modern students hostels, which also marked WDU’s final act in its year-long preparation to have all its main activates in its permanent site.  Mouboghare congratulated WDU on the state of the art facilities in the school saying that all the great universities of the world take comfortable hostels and classrooms seriously because students cannot give their best if they are condemned to live and study under squalid conditions. He added that as the youths are the leaders of tomorrow, the environment in which they grow up is very germane to their overall development and development of their sense of decency.

The Education Commissioner, accompanied by his Permanent Secretary, said that the Governor of Delta state, His Excellency Senator (Dr.) Ifeanyi Okowa, will soon establish an Education Trust Fund to uplift the level of education in the state.

He said that on that note, the state government will give its support to all levels and aspects of the educational sector to achieve that enviable goal. He said that Delta state has been noted for its educational achievements, as every community in the state has always tasked itself to uplift their localities’ educational facilities. Thus, he poured encomiums on the brains behind the founding of the Western Delta University in Oghara, as it has no doubt been contributing its quota to uplift education in Delta state.

The hostels commissioned Tuesday will adequately, and in real comfort, accommodate over a thousand students. With that commissioning, the majority of WDU students will now reside within the university’s permanent site, while only those who decide otherwise, would be attending classes from the town but that would not be for lack of adequate students’ hostels

Prof. Mouboghare, while commissioning the new students’ hostels and a five-classroom block at UDU, Oghara, urged the university and the other private universities in the state to establish Medical Schools without delay, instead of waiting to establish Teaching Hospitals first. He said that such universities should use the great hospitals close to them as their own teaching hospitals and train their medical students in such hospitals. He said that WDU, for instance, already has a state of the art hospital right there at Oghara.

Prof Mouboghare said that the Delta state government will soon come out with the details of the Education Trust Fund which will meet the needs of both public and private tertiary schools in the state to ensure that the standard of the universities in the state will be second to none in the country. This will encourage other higher institutions to sprout up in the state, and eventually make Delta the hub of higher education in Africa and also harvest the attendant benefits.

Prof Mouboghare drew a sustained applause when he announced that Delta state is working out an arrangement with some organisations to provide 24-hour electricity to educational institutions in the state. He said that depending on the individual needs of each institution, and its location, solar power or wind energy may be exploited to generate the electricity an institution would need. He added that it is only when such constant electricity is present in schools that the talk about computers in schools or e-libraries will truly be meaningful and have the desired impart.

Also, the WDU Vice-Chancellor, Prof (Mrs) Otete Cecelia Okobia announced that when WDU resumes next week for the 2019/2020 academic session, and students return on Sunday, all school activities will now hold at the permanent site.  The WDU Registrar, Mr. Moses Olu Osamede added that this would mark a new phase in the university’s life as it would make overall coordination and administration easier than before.