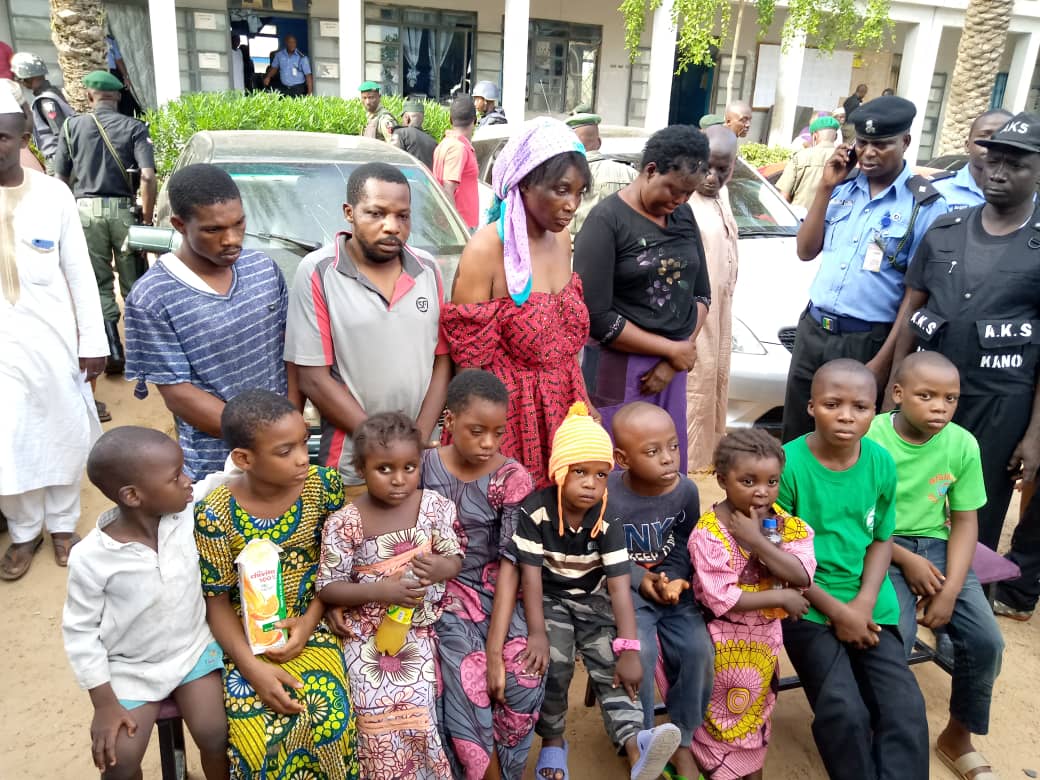 The Nigeria Police, yesterday in Kano, formally handed over eight out of the nine rescued kids, who were forcefully abducted in the state and sold into slavery in Anambra state, to the Kano state government. The ninth child was said to have taken ill and is currently receiving medication, at a hospital, in the state capital.

Receiving the liberated children at Africa House, Government House, Kano, the state governor, Dr. Abdullahi Umar Ganduje, represented by the Secretary to the State Government, Alhaji Usman Alhaji, described the discovery of the children as divine act, stressing that the Police had demonstrated high capacity to deal with criminality.

“I must commend the CP and the Special Anti – Kidnapping squad for rescuing these children. Since this incident happened, the Police have appropriately managed the situation, to the extent that no breach of the peace occurred anywhere”, he stated.

“On this matter, specifically, the government of Kano state has been in constant contact with the security agencies because of the gravity of the situation and the need to make sure that situation does not degenerate to something else. We have vowed to protect lives and property of the people and the government is remaining resolute in that direction”, the governor stated.

“In this connection, I want to appeal to parents of these rescued children to always watch their words and restrict themselves and the kids from unnecessary media exposure and dealings with NGOs, as some people may likely exploit the situation for selfish reasons”, Dr. Ganduje remarked.

According to him, the parents must understand “that investigation into the case of their children and similar cases is going on and their words and actions are capable of jeopardizing the work of security agencies”. He appealed to them to shun any action that would lead to social unrest.

He announced that the state government would unfold a special arrangement for the rescued kids during a special meeting with them and their families, at a date to be communicated to their parents soon

Presenting the children to the governor, the Commander, Anti Kidnapping Squad, Nigeria Police, Kano Command, CSP Babagana Saje explained that it was the reported kidnap of one child that led his men to promptly apprehend the suspects, leading to the discovery of a kidnapping racket in Kano and Onitsha.

“We have arrested some of the suspects including a man and his wife, who kidnap children here and sell them off in Onitsha. They sell the children for about N200, 000 to a lady in Onitsha who in turn sells them to her customers in Lagos. In fact, two of the children were found with her, as domestic servants”, he explained.

He remarked that the Police found out that the kidnapped children were renamed and converted from Islam to Christianity to conceal their original identity and prevent them from being discovered.

According to CSP Saje, “parents of seven out of the nine have identified their children, following the necessary security procedures, but two are yet to be claimed. I, therefore, want to urge parents whose children have been kidnapped in Kano to please come forward and identify the remaining two kids in our custody”.

“All the suspects in this case will be taken to court as soon as the Police complete investigations”, he assured.

Speaking on behalf of the parents, Malam Muhammad Ali explained that his daughter Aisha, was abducted in 2016. He said all the parents were overwhelmed with joy reuniting with their kids and thanked the Nigeria Police for doing a wonderful job.