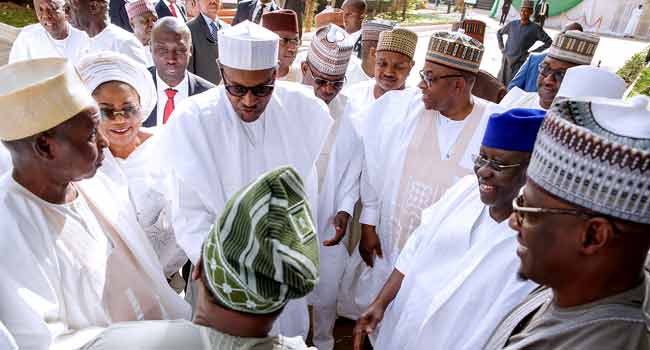 The meeting of forum of chairmen of the 36 states of the All Progressives Congress (APC) with the Secretary to the Government of the Federation, Boss Mustapha, in attendance over the lingering crisis bedevilling the party ended in a deadlock, Daily Trust gathered. The closed doors meeting, convened to review the 10-day ultimatum given to the Adams Oshiomhole-led National Working Committee (NWC) by the chairmen was held on Sunday night in Abuja. The ultimatum given to the chairman of the party to address their concern elapsed on October 3, thus the Sunday review meeting.

At the end of the meeting that lasted for many hours, the APC state chairmen refused to speak on the outcome of the parley, unlike when they met last month. Daily Trust reports that in September, the forum gave the ultimatum at the end of their meeting.

The state chairmen, in a communiqué issued and signed by their chairman and secretary in September, Ali Bukar Bolari and Ben Nwoye, who are also Borno and Enugu states chairmen respectively, protested against poor reward system in the party, abandonment of founding fathers, neglect of the entire party structure, and the failure to produce a substantive National Secretary after the exit of Mai Mala Buni, the present Yobe State governor. One of our correspondents report that when the SGF was leaving the venue of the meeting, the chairmen that saw him off wore a cheerful look.

However, they were not willing to reveal the deal struck at the closed door meeting. Efforts to get their chairman to speak on the outcome of the meeting failed as he did not pick his calls. Another issue worrying the party’s stakeholders is the refusal to convene a quarterly meeting of the National Executive Committee (NEC), a decision making organ of the party.

The meeting was held last 13 months ago. Crisis in states Daily Trust reports that the crisis rocking the party has worsened in many states with Katsina and Edo, where Buhari and Oshiomhole hail from, being the most affected. In Katsina, the home state of the president, the crisis is between the governor, Aminu Bello Masari and a group he called, “Abuja forces” which he said are undermining his administration, using federal might and resources.

In Zamfara, the dust that trailed the party’s primaries ahead of the 2015 general elections has not settled. The party had lost the state to PDP, following the internal wrangling that engulfed it.  Despite the loss, two factions of the party still exist in the state. A former governor of the state, Abdulaziz Yari, leads one of the factions, while Senator Kabiru Garba Marafa, controls the other camp.

Penultimate Sunday, Marafa in Gusau, said “I want to use this opportunity to reaffirm to the people of Zamfara and other Nigerians that I remain an APC member. I want to inform Nigerians that APC in Zamfara remains divided. My faction is still intact and there is no going back.” Also, in Bayelsa, the party has been enmeshed in crisis ahead of the governorship election in the state scheduled for November 16, 2019, with two factions believed to be loyal to the party leader in the state, Chief Timipre Sylva and immediate past Minister of state for Agriculture, Senator Heineken Lokpobiri respectively suspending about 10 officials of the party including the chairman, deputy chairman, secretary and others.

In Kwara State, the crisis in the state chapter of the party was blamed for the delay in the constitution of Kwara State Executive Council, months after Governor Abdulrak Abdulraham sworn. Though, the governor has sent his list of commissioner- nominees to the Kwara State House of Assembly, the storm is yet to be settled. It’s not a genuine platform for governance – PDP The Peoples Democratic Party (PDP) has said the “violent attack” by members of the All Progressives Congress (APC) on the embattled national chairman of the party, Adams Oshiomhole, is a confirmation that the ruling party was in shreds.

The manifest greed and ravenousness of its leaders in addition to endless infighting over positions and looted resources have further exposed the party as a soulless mob’’, he said.

A political analyst, Dr. Abbati Bako, said the crisis if not addressed would affect the fortune of the APC come 2023.

“The crisis within the APC is not unexpected because politics is all about competing values, interest and ambition. Therefore, crisis is (naturally) expected to happen between now and the year 2023. But the point is the way the leaders and stakeholders of the party will use their expertise and experience to manage the crisis in the party before the elections of 2023.

“Another issue is about the appointment of the Political Advisor to President Buhari, who can advise him on how to manage the crisis or control the damage between now and 2023. So, it is imperative for the party to advice the President to appoint a political advisor’’ Bako who is of International Political Resource Centre, Kano said in interview.