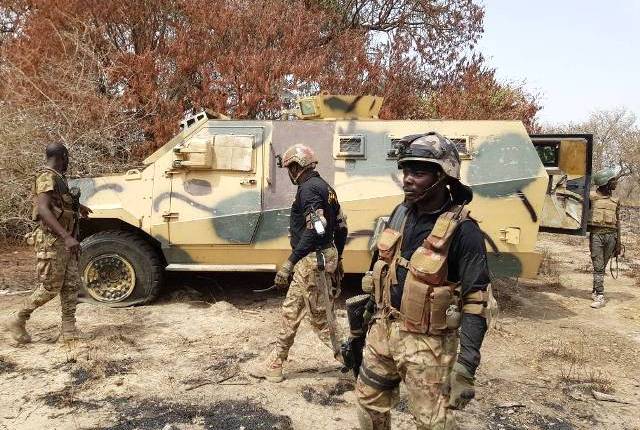 The Movement for the Survival of the Ogoni People (MOSOP) strongly condemn the rape of two Ogoni women yesterday by Nigerian soldiers currently raiding Ogoni in search for criminal gangs. The two women were confirmed raped by armed soldiers in Biara and Mogho both in Gokana local government area.

The Federation of Ogoni Women’s Association (FOWA) have reported at least 7 cases of rape in Gokana and Khana local government areas in the past three days. These are not acceptable us.

MOSOP holds that while we support the move to eliminate criminal gangs, we do strongly disagree with the current activities of Nigerian soldiers turning their interests to Ogoni women and peaceful civilians.

MOSOP strongly condemn the chase for women rather than criminals by Nigerian soldiers and call on the military authorities to commission investigations into these abuses.

While we insist that only proper and effective policing can check the activities of criminals in a civil society like Ogoni, we demand explanations by the military authorities on the progress made in the current operations particularly in respect of the criminals they sought to arrest, those that have been arrested and the sponsors (politicians and oil companies) identified to be funding the criminal gangs.

In our opinion, the current operations do not seem to have a strategic focus rather, soldiers are simply descending heavily on every civilian, raping women, torturing and also extorting the people all to justify their presence in Ogoni.

In K-Dere, Gokana local government area, for instance, on Wednesday, September11, soldiers shot and killed two persons and left with their corpses. One person who paid a bribe of NGN145, 000 (an estimated $300) was let go. He told us the two persons were shot right before him.

Also in K-Dere, a widow had her house burnt. Her neighbor was seriously beaten and NGN29,000 she kept for her child’s school fees taken away by soldiers.

Seven persons were killed in Baen, Khana local government area on Wednesday, September 11 including the son to a king. No further detail have been made available on who they were. We seek to know their full identities and their relationship with the criminals.

Yesterday, September 13, the home of Mr. Sunday Nanwin was burnt down in Bera, Gokana local government area. Another home belonging to a traditional priest was razed in the same community.

Sacred places are now been desecrated and burnt down with the thinking that they provide some spiritual inoculation to criminals. The entire operation is loosing a strategic focus as far as we are concerned and only increasing social apprehension, civilian abuses and casualties.

Passers by are subjected to inhuman treatment and will have to trek long distances, up to 1km, with hands raised, forced to chant a slogan: “i want peace” Children are worst hit as families are no longer free to walk the roads to their farms and basic food supplies are cut.

We have received reports of destruction and killings in Gwara, Zaakpon, Kapnon. We will want details about these operations and guarantees about the safety of innocent local people.

MOSOP is worried that the situation in Ogoni at the moment is reminiscent of a repression and could degenerate into a humanitarian crises as it is no longer seem to be a strategic intervention to restore peace and intelligently dislodge criminal gangs in the area.

We are worried by the heavy military clampdown on civilians, the rapes and the terror being unleashed on common people, travelers and passersby going about their normal businesses and demand explanations from the military authorities on current operations.

Finally we hope that this military operation does not transcend into an onslaught against the civil Ogoni population to weaken Ogoni’s demands for basic rights and resistance against forceful oil resumption emanating from long years of abuses.