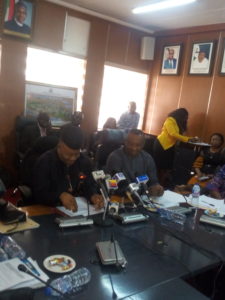 The The Minister of Niger Delta Affairs, Sen. Godwin Akpabio, has stressed the need for redirecting the affairs of the Niger Delta Development Commission (NDDC) affairs, saying that the commission has over N2 trillion debt to settle.

Akpabio stated this at a meeting with the management team of NDDC on Wednesday in Abuja.

He said that the commission had not performed well in its main responsibility, which was the development of the Niger Delta region.

The minister said that the impact of the commission on the entire region would have been more, but for some factors such as personal interest and undue interference, among others.

He stressed the need for collaboration between the ministry and the commission to move the region to a higher level.

“We will look into the budgetary allocation and see how it can be improved upon, because the success of any organisation starts from budgeting.

“We want to redirect the budgeting procedure of the commission so that we can aim at the ongoing projects, that is, those that are nearing completion but which have not been completed due to lack of human will,” he said.

According to him, there are too many uncompleted projects across the Niger Delta region due to lack of proper coordination, adding “we will not allow that any longer.

“We are going to focus on the key ones that are on ground for us to complete between now and next year and also start some things that can create employment opportunities,” he said.

Akpabio also said that the East West Road was one of the major priorities of his administration, pledging to work very hard to ensure the development of the region.

Dr Akwagaga Enyia, the Director overseeing the NDDC, expressed the commission’s readiness to cooperate with the ministers to ensure development of the region, while appreciating them for such a meeting.

Earlier, Mrs Didi Walson-Jack, the Permanent Secretary of the ministry, pledged the commitment members of staff to the actualisation of the vision and mandate of the ministers.

“We will be an effective and efficient workforce, working with you to formulate and execute best policies, programmes and projects that will address the challenges in the Niger Delta region.

“These include, but not limited to, infrastructural development, environmental degradation, poverty alleviation, entrepreneurship, job creation, unemployment and security, among others,” Walson-Jack said.