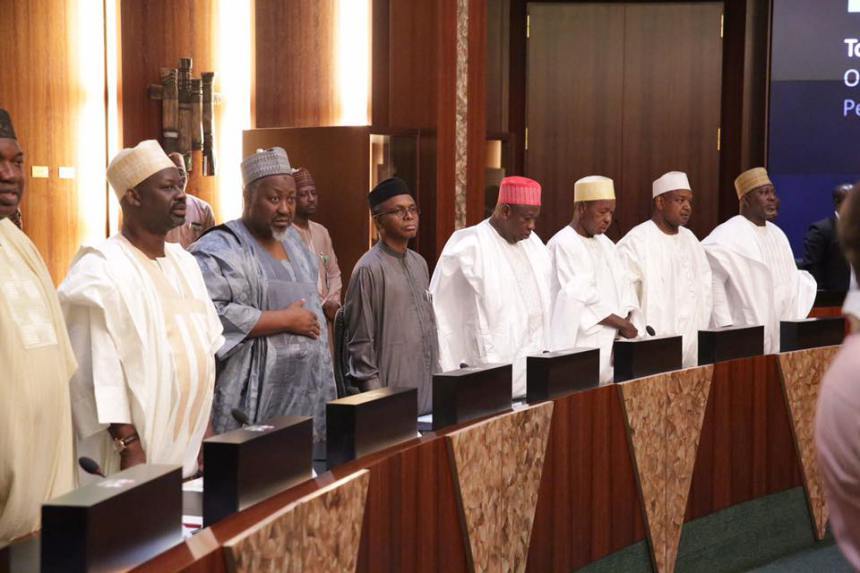 Ahead of the review of the revenue sharing formula scheduled to start on Thursday, there are strong indications that state governors may demand 42 per cent of the federal allocation as against the 26.72 per cent they currently get.

The Chairman, Revenue Mobilisation Allocation and Fiscal Commission, Mr Elias Mbam, had on Tuesday revealed that the commission would set up a committee in the coming week to review the revenue sharing formula for federal, states and local governments due to the current economic realities.

The current revenue sharing formula was designed during the tenure of former President Olusegun Obasanjo, who ruled between 1999 and 2007.

But, ahead of the inauguration of the review committee on Thursday, a highly placed source privy to the pre-meeting discussions among governors told one of our correspondents on Thursday that the governors might adopt the recommendation of a report earlier submitted by a sub-committee set up by the forum to review the formula.

The source, who asked not to be named, said, “A committee was set up by the forum and that is the position of the forum on the matter of the revenue formula. The sub-committee met as far back as 2011 and it was made up of six governors, headed by the then governor of Lagos State, Mr Babatunde Fashola.

“From the report they submitted to the forum, they recommended that the Federal Government should now get 35 per cent; states should get 42 per cent  and local government should get 23 per cent. That was the recommendation and that is what we have continued to push for.”

When asked what the governors based their proposal on, the source said they looked at their quest to be able to pay the minimum wage; the need for more resources to fight insecurity and the decaying infrastructure in their domain, which, according to him, the states do not have the funds to address.

He said, “The governors noted that managing states today is becoming very expensive and they mentioned the issue of security. Even though there is a central police system, the responsibility is falling on state governments to inject funds to help the agencies and so they have been involved in one way or the other.

“The cost of securing the states has simply become more expensive and the burden is now heavy on the states. The population has also increased over time and these people are in the respective states.

“So, when the governors said they needed some adjustments done with the revenue formula in order to defray the increase in the minimum wage, the new formula I mentioned to you was the formula they were referring to. The report was adopted and it was sent to the Federal Government but nothing was done about it.

“During the negotiation for this minimum wage, the governors again presented their position. They were initially reluctant to agree to the N30,000 but eventually, that was why they said if it (minimum wage) must be implemented with ease, there must be an adjustment, and so the report was again sent to the Federal Government but nothing was done about it.”

When asked if the NGF would stick to the 2011 recommendation, he said, “I’m tempted to say yes, because there had been no cause to reconstitute another committee to review it, so even though it’s relatively old, as far as we are concerned, that is the official position.”

“Yes, we know there has been this talk about states boosting their IGR and that they should be able to use that to take care of their recurrent expenditure, but the infrastructure for making that happen is not there.

“If there is no security and the states are not safe,  how do businesses make money and how do you generate revenue from them? The management of the power sector is still substantially controlled at the centre and so if you can do something as a state to address the power problem, it could change a number of things.

“On one hand, they are called the chief security officers of their states but on the other hand, the resources they need to make it happen are inadequate. So, we looked at all of these to arrive at that formula and that is our position.”

State governors had at the National Economic Council meeting on January 18, 2019, renewed their call for a review of the nation’s revenue sharing formula, saying it was necessary for them to be able to pay the N30,000 new National Minimum Wage.

At the meeting, which comprised state governors and some key Ministries, Departments and Agencies of government and chaired by Vice-President Yemi Osinbajo, an official privy to the NEC meeting, said, “The governors are asking for a review of the revenue sharing formula and government is looking at that. The Minimum Wage Technical Advisory Committee that was inaugurated recently is also looking into the revenue sharing formula.”

Over time, the formula has generated controversies and remained a key factor in the clamour for true federalism or restructuring.

Meanwhile, members of the Nigeria Governors’ Forum have said they are ready to share their perspectives on how to have a new revenue formula with the revenue commission if invited.

Chairman of the Forum and Governor of Ekiti State, Dr Kayode Fayemi, told one of our correspondents that the NGF had yet to take a common position on the issue.

“No decision on this yet, but if the RMAFC approaches us, we will share our perspective with them,” he said.

However, a governor who spoke to Saturday PUNCH on strict condition of anonymity, said members of the NGF would soon meet on the matter.

He said even though a report on the issue by the NGF was being studied and would be reviewed before presentation to the revenue commission, he said the governors would demand between 40 per cent and 45 per cent of the nation’s revenue.

He said, “We already have a template. The template is that we want between 40 and 45 per cent. This demand is based on realistic responsibilities that have been put on our neck by the constitution. Apart from this, there are instances whereby the Federal Government has abdicated its responsibilities to the states.

“For example, states have taken over the funding of police. Apart from the payment of salaries and uniform for the policemen, it is the states that are almost solely responsible for their operations.

“We are doing half of that for other security agencies. Look at the roads, states have been responsible for the maintenance and even reconstruction of federal roads in our states as well. Even federal hospitals have been abandoned to us.”

Meanwhile, in response to enquiries by Saturday PUNCH, the spokesperson for the RMAFC, Ibrahim Mohammed, confirmed to one of our correspondents that a review committee would be inaugurated on Thursday.

Even though he did not disclose the time to be given to the committee to conclude the assignment, Mohammed explained that the committee was a “standing committee” whose work was constitutional.

Our correspondent also learnt that the three tiers of government and other bodies would be expected to make presentations and submit proposals to the committee.

“We (RMAFC) will invite memoranda from not just the states, but also from civil society organisations and even the media,” he added.

He explained that at the conclusion of its work, the committee would forward its report to the President.

The RMAFC spokesperson was, however, silent on whether the commission had any projected take-off date for the revenue sharing formula that would be adopted. Rather, he said, “We are starting with the committee first – when the committee is properly constituted, that will set the ball rolling and it is then that we can start talking of timelines.”