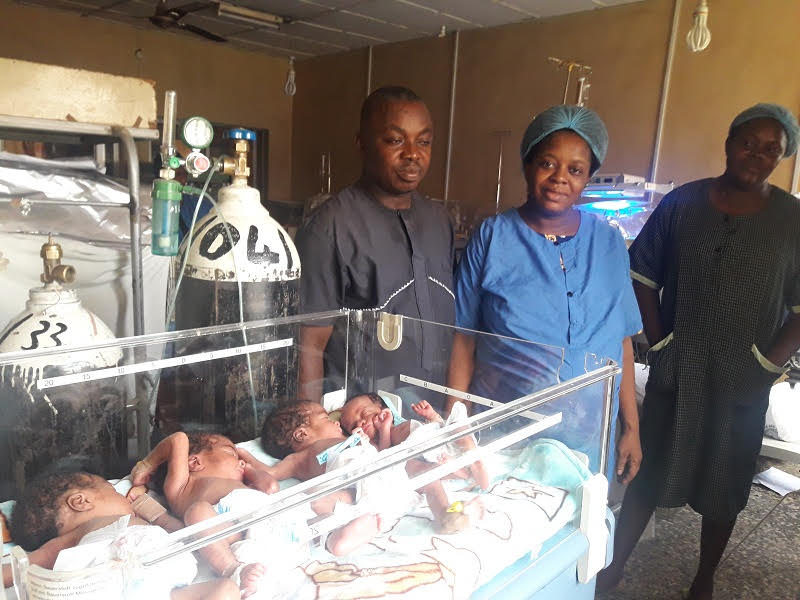 An Nnewi-based industrialist and philanthropist, Chief Louis Carter Onwugbenu has restored hope to a set of quadruplets, their mother and twelve other patients who have been detained in the hospital for inability to settle their medical bills.

The lucky nursing mother -Mrs Nkechi Ibe, a staff of the Awka North Local Government Area of Anambra state who was on referral to the Nnamdi Azikiwe University Teaching Hospital, (NAUTH), Nnewi before now had a three year old girl.

Apparently oblivious of the multiple birth on the way, the family described the set of babies as “overdose and unexpected” on a their arrival.

Though they were delivered through Caesarean section, the babies are doing well. They are three males and a female.

The visibly distraught husband, an Evangelist at the St Barth’s Anglican Church, Umuezeagu Uruagu, Nnewi, who hail from Mbaitoli in Imo State while expressing gratitude to God for the gift and Chief Onwugbenu for his intervention,had mixed feelings and concern on how to cope with care for the now very large family, considering the economic situation in the country presently.

According to him, “Immediately after the babies were safely delivered, somebody came to where I was anxiously waiting and said to me congratulations father of four! I shouted Jesus! I was not expecting four at a go.

“Actually, we were told from the result of the scan conducted in one of the hospitals in Nnewi that the babies were three but to my greatest surprise they turned out to be four and that really threw me off balance.”

He therefore sent out a passionate appeal to governments, agencies and public-spirited individuals to quickly come to his aide to enable him cope with the situation and see to the survival of the children and their mother.

In fact it was his distress call that caught the attention of Chief Onwugbenu who was well known to have been intervening in such situations.

Onwugbenu, though described as naturally shy, he was said to wastes no time in such situations, as often uses such activities to mark his birthday every August, annually.

As if waiting for the call, Chief Onwugbenu did not hesitate to rush to NAUTH to see the Ibes who before then were left in confusion as to how to settle the hospital bills, feed the babies and take care of some other challenges.

According to reports, Onwugbenu on arrival at the hospital was confronted with more than he had envisaged as many other indigent patients who had long been discharged were there to receive and appeal to him. He doled above One and half million Naira to bail out the thirteen (13) patients including the quadruplets and their mother. 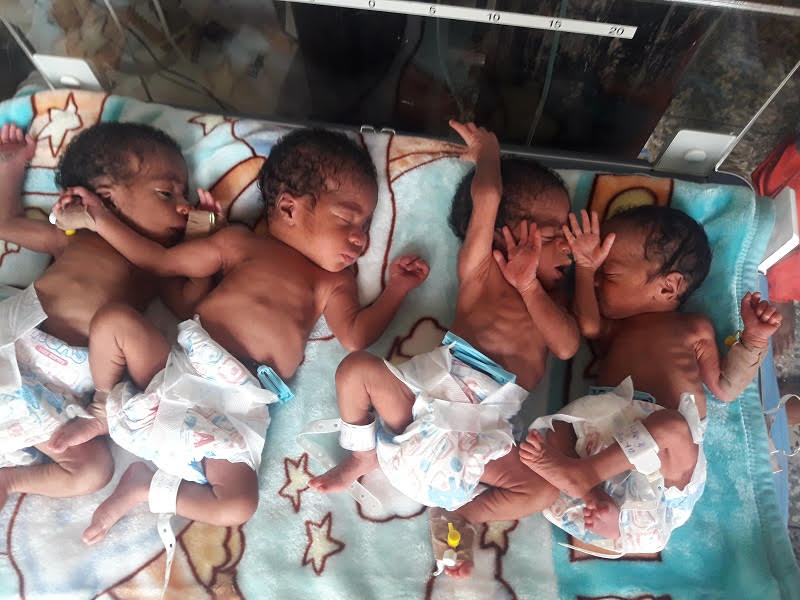 The 66 year old philanthropist in an interview at the hospital acknowledged he isn’t the richest but that it gives him extra joy to restore hope to others and to glorify God Almighty for his blessings on him and his family. ” I see it as a call to service to humanity by God Almighty. After all no one knows who will be what tomorrow..”, he added.

Chief Onwugbenu called on other philanthropists and governments not to look the other way whenever they hear the cry of indigent members of society. He said that they should be helped, “because no one knows who will be what tomorrow.”

It was disclosed that Onwugbenu had intervened and given out lifetime scholarships to about five other quadruplets and quintuplets in the last 20 years. The latest was August last year -a set of quintuplets-4boys and a girl, named Akachukwu, Chiemelie, Chidiomimi, Chinweolu and Ezinwanne who were born to a 40-year old Keke operator Mr Abuchi Odo-Ezugwu and his wife, Ndidi, 30.