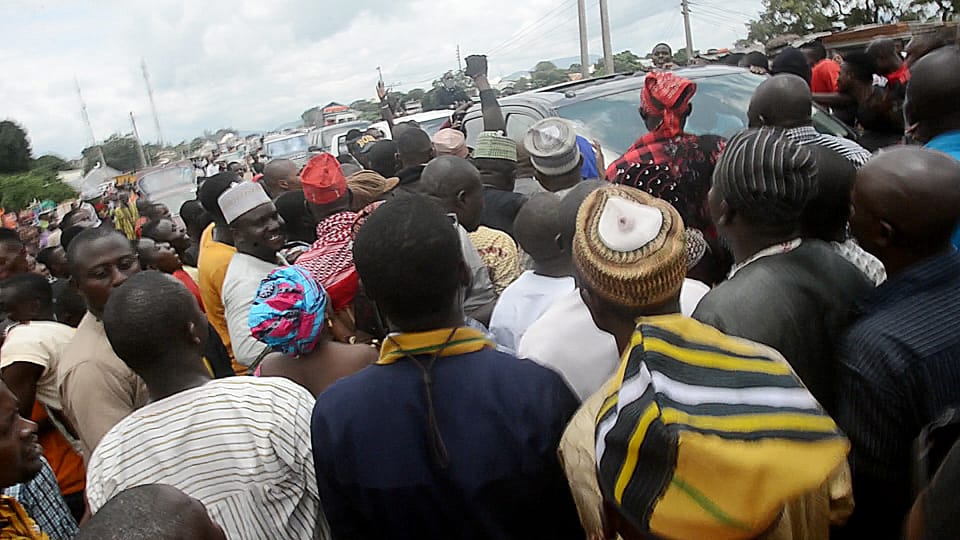 The train arrived at the Palace of the Ohimege-Igu of Koton-Karfe at 1:15pm to a festive and tumultuous reception by party supporters on Friday, 9th August, 2019. After making his intention to vie for the governorship seat known to the royal father, the Ohimege-Igu, Alhaji Abdulrazaq Gambo Isakoto, the royal father thanked Prince Muhammed Audu for honouring him. He gave his royal blessings to Prince Muhammed Audu before his train left the palace for Lokoja, the State capital.

On arrival at Lokoja at 2:10pm, the long arcade of entourage locked the city and held it stand still. The roads were taken over by thousands of supporters who trooped out en masse to welcome their leader, Prince Muhammed Audu. While in Lokoja, he met, formally declared his ambition to the people of Kogi Central and Kogi West, and had an interactive session with them. The people enthusiastically pledged their support and commitment to his gubernatorial course.

On Saturday, 10th August, 2019, in continuation of the familiarization tour, the train left Lokoja for Kogi East, where the people greeted Prince Muhammed Audu with pomp, fanfare and pageantry. The cheerful crowd trooped out in their scores in adulation to welcome their highly revered great son. The euphoria of his arrival at Itobe spread like wildfire, leading almost to a stampede, as owners of provision stores and roadside food sellers abandoned their shops and businesses to catch a glimpse of a young Prince who they so much love and want to support to be their next leader.

On leaving Itobe, Prince Muhammed rode in a convoy of over 120 vehicles with an entourage of friends, political and business associates and admirers that accompanied him from Lokoja, the State capital to Idah, the seat of the traditional institution of Igalaland.

In his usual style of vivacious human relations, Prince Muhammed Audu stood through the open roof of his car and acknowledged the thunderous cheers from the tumultuous crowd.

“Our ancestors guided, guarded and sustained your father through thick and thin. As your royal father, I invoke same ancestors to guard you, protect and guide you as head for Lugard House. You will not wobble and fall. You will stand firm. You will succeed. Our ancestors will back you up on this political voyage. You shall not be a victim of the evil agenda of your enemies. Where there is danger ahead, may you be far behind, and where there is danger behind, may you be far ahead. As you have chosen to tread this noble path, you will not stagger, you will not strike your foot against any stone until your ambition becomes a reality. As I bless you today on your governorship ambition, our ancestors and your father will guide and lead you to victory.”

The train left Idah for Anyigba, where thousands of jubilant residents gave the Prince a heroic welcome. In Anyigba, Prince Muhammed met with Alhaji Salami Abdullahi (ASTA) and other strong party members.

Prince Audu and his protracted convoy proceeded to Egume where he paid a courtesy call on the Onu of Egume, Alhaji Etila Ajeka. He made his intention to run for the office of the governor known to the royal father and received the royal blessing.

From Egume, train proceeded to Ankpa where he was received by Ankpa’s great political leader, Alhaji Siaka (Wa’ali) and a very large crowd of party faithfuls.

The last point of call after Ankpa was Ogugu, the headquarters of Olamaboro Local Government Area. Prince Muhammed’s grandmother, (the mother to his late father and great political icon, Prince Abubakar Audu) hails from Ogugu. The people of Ogugu trooped out in their numbers and received the Prince with warmth and candor. They expressed their pleasure and wish for the Prince to visit them again.

All the places Prince Muhammed and his entourage visited, people wished and prayed sincerely and honestly for him to emerge the Chief Executive of the State, so that he can redeem them from the clutches of tyranny, poverty, insecurity, non-payment of salaries, unwholesome job-loss and terrible leadership which has become the lot under Governor Yahaya Bello-led administration.

By and large, Prince Muhammed Abubakar Audu’s tour of the State turned around the polity and hope of the ordinary people across the State.

Watch out for more interesting days ahead in Kogi politics.