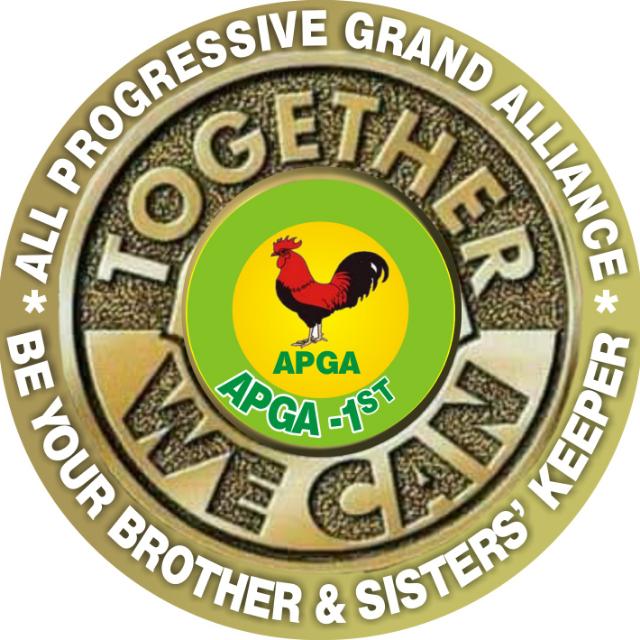 The State Working Committee (SWC) of the All Progressives Grand Alliance (APGA) in Abia has said that there is no faction in the party at the state and national levels.
The SWC, led by Rev. Augustine Ehiemere, said this at a news briefing in Umuahia on Saturday, while reacting to a media report insinuating that the party had split into two factions.
It contended that contrary to the media report, “APGA has only one recognised SWC in Abia, under the able leadership of Ehiemere.”
News Agency of Nigeria (NAN) recalls that the Ehiemere-led state executive committee (EXCO) on July 15 suspended the 2015 and 2019 Governorship Candidate of the party, Dr Alex Otti, and expelled one Mr Nkem Okoro, from the party for alleged anti-party activities.
Okoro was said to have emerged as the chairman from a parallel congress organised by a faction of the party loyal to Otti.
Mr Ebere Uzoukwa, the Publicity Secretary of the Okoro-led faction, in a swift reaction to Otti’s suspension, said that Ehiemere-led EXCO lacked the power to suspend or expel any member of the party.
Uzoukwa claimed in his media interview in Umuahia that Ehiemere’s EXCO was replaced by Okoro’s new state executive.
In the SWC’s reaction to Uzoukwa’s claim read by its Publicity Secretary, Mr Felix Nkoro, it said that “it is doubtful, if Uzoukwa is even a member of APGA.”
It pointed out that Uzoukwa’s name could not be found in the party’s register.
The SWC also took exception to the alleged efforts by Uzoukwa to portray the party in bad light in the media, saying, “his determination to malign the character and image of the party and its leadership is becoming a pattern.”
The committee expressed its determination and commitment to enforce discipline on any erring member of the party, no matter how highly placed.
It said that the party would no longer tolerate illegal and unconstitutional conduct as well as acts of insubordination by members to the party leadership at all levels.
It denied the allegation that it was colluding with the Peoples Democratic Party in the state “to frustrate Otti’s petition,” challenging the declaration of Gov. Okezie Ikpeazu as the winner of the 2019 poll.
NAN further recalls that the party produced two national EXCOs on from two parallel conventions on June 1, with Dr. Ike Oye and Mr Edozie Njoku, as chairmen respectively.
In Abia, while Ehiemere-led EXCO is loyal to a former governorship aspirant of the party, Chief Chikwe Udensi and Oye’s leadership, Okoro’s group remains loyal to Otti and Njoku’s faction.