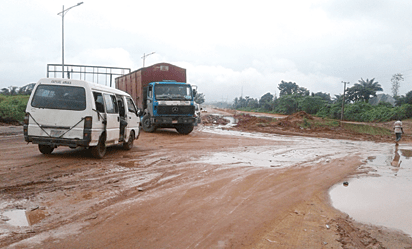 The Civil Liberties Organisation (CLO) has urged the Federal Government to commence palliative work on the deplorable Onitsha-Owerri expressway in Anambra to reduce fatal crashes along the road.

The state Chairman of CLO, Mr Vincent Ezekwueme made the call in a statement made available to newsmen on Monday in Onitsha.

News Agency of Nigeria (NAN) recalls that a 40 feet container on Mercedes Benz articulated truck fell on two tricycles carrying passengers along the bad portion of the road.

The group decried the pathetic and deplorable condition of the road as a result of lack of maintenance.

“We appeal to President Muhammadu Buhari, as the father of the nation, to immediately come to the rescue of commuters and others using the road to avoid further loss of lives.

“We urge the Federal Government to immediately direct the Federal Roads Maintenance Agency (FERMA) to commence rehabilitation on the road as well as other federal roads in the state.

“This is to avoid further loss of lives plying these ever busy roads,” Ezekwueme said.

He appealed to the president to extend the palliative work on 3-3 Nkwelle-Otuocha federal road.