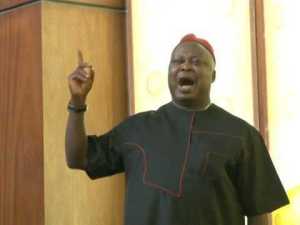 The Vice President, Prof Yemi Osinbajo has disclosed that the Nnamdi Azikiwe University(Unizik) Awka will be the first and only university to have its own independent power supply source. And that the project will be commissioned in a matter of weeks thence.

Having listened to the numerous bitter words with which members described how the party and its members in the state were being treated, he blamed it on lack of unity. He therefore urged for unity, pointing out that his presence is the beginning of a new beginning. “We have to start with a new leadership pattern. We are going to make a lot of adjustments so as to position our party towards winning the next governorship of the state.

He also suggested the appointment of at least three members per council for the schools feeding programme.

It was a pin drop silence as the state chairman of the party, Chief Basil Ejidike read his 3-page welcome address which was like a communique by the members.

Chief Ejidike lamented that despite being endowed with men and women of proven integrity and experience to deliver in any election but lacks cohesion and motivation. He noted that the party registered membership strength in the state is in excess of two hundred and fifty thousand who deserve to be motivated through empowerment programmes, and to be given a sense of identity and direction.

He also registered the protest of the party in the state of the appointment as an aide by the Speaker of the Federal House of Representatives, Femi Gbajabiamila of Chief Anayo Nnebe, a card carrying member of the All Progressives Grand Alliance(APGA) who bitterly ran for the last election against APC candidate; and had equally demonstrated in no small measure eagerness to destroy APC in the state.

He said this development was very demoralizing to members who toils daily to uplift the party. The party therefore in no mistaken terms mandate Gbajabiamila to sack Nnebe immediately and replace him with a certified APC member from the state instead.

Ejidike said the members were aghast that even in the Federal Government’s school feeding programme, even the contractors and cooks were hijacked by APGA members. And that painfully the cooks were forced to wear aprons that were clearly marked Willie is Working. He summarized it by recognizing what is happening in the state as ‘monkey dey work, baboon dey chop’. He also urged for the VP to arrange a meeting with leaders of the party from the state, in his office, to formulate way forward.

It was even hectic for the Minister designate, Dr Chris Ngige to speak as he was intermittently shouted down. He acknowledged he won’t make long speech as the anger I see in this hall is palpable. Please we will talk at the forthcoming summit between October and December…”

He therefore called for patience and cohesion so as to remain focussed.

Dr Tony Nwoye put it bluntly -APC as a party does not exist in the state. I joined the party to use it as a platform to better the lot of my people.

“APC has never won a state assembly or any National Assembly seat in the state, let alone winning governorship seat in the state”. He went on to reel out numerous other areas of dismal performance of the party in the state, “… which was due to lack of unity, cohesion and empowerment.”

Fort Dike said, “if you give us the governor of this state by one means or another, that will be enough for us.

“We want to be the people enjoying the benefits of being in power, not the opposition…”, he added.