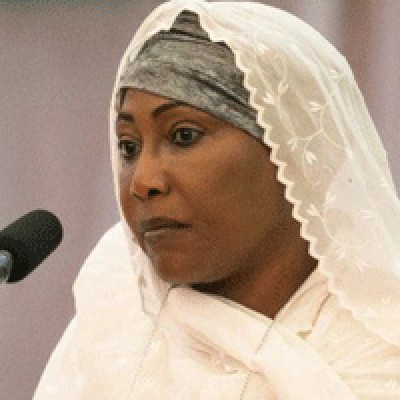 I read with antipathy a nauseating and puckish piece, published on an online platform, NewsDiary of June 19, 2019, titled: ‘’The Elephant in the Room: A Dent on its Trunk,’’ authored by Naja’atu Muhammad, a sadist, a self-styled anti-corruption crusader and human rights activist  struggling to survive the harsh terrain of ‘political loneliness’. When I carefully read the piece, her sentiment is laid plain. Taking cognizance of the personality of the author; a professional character assassin, I decided not to honor the tacky item with a rejoinder but to laugh it off and move on. However, knowing fully well the writer’s knack for out-and-out abuse, snigger, disparagement or consummate spite of public figures, one is curious to put out a response, because the writer does not respect herself and is willing to do nasty things for the highest bidder.

One is not at all surprised at whatever this writer did, because she does not have any relevance in the political scheme in Kano or command any respect from party members or supporters she claims to belong. She only survives on being used to tick off public figures for peanuts. In fact, because of her irrelevance in Kano politics, since the aborted Third Republic when she contested and won the Senatorial seat, Naja’atu remain disconnected with the people and dares not to contest any election again, since she cannot deliver even her ward.

The writer is that kind of person that does not see anything good in other people. Our memories remain fresh with your jaunts. She was one of the party members of the defunct ANPP who continue to attack the party’s presidential candidate, Muhammadu Buhari and former Governor of Kano state, Malam Ibrahim Shekarau. Also for refusing to give in to her unconscionable demand from him, former Governor Rabi’u Musa Kwankwaso suffered her contemptuous attacks. The same thing will happen to any person who becomes the state Chief Executive so long as he refuses to yield to her inordinate request.

It is, however, unbecoming of this Abuja-based politician, a commissioner with the Police Service Commission, whom we have learnt, has become a cog in the wheel of progress of the commission, to abuse her office by writing a deleterious article just to satisfy her ego. If the Nigeria Police Force is what it is today as painted by the author who happens to be part of system, I don’t think writing on the pages of newspapers, magazines, online publications or interviews in broadcast stations is the appropriate channel to be used to addressing the issue. After all, your piece will not in any way exculpate you from the ‘perceived messes’ of an institution from which you gets your daily bread.

We are very much aware of your alliance with the opposition elements despite your claim to being a member of the ruling APC government as well as your staunch opposition to the administration of Governor Abdullahi Umar Ganduje of Kano state. In fact, one of your ‘scandals’ in the commission is influencing the deployment of a partisan Police Commissioner in person of Muhammad Wakili to do the bidding of the opposition, as part of effort to see that Governor Ganduje is not return.

It is very unfortunate that while politicians of your generation command a great deal of respect, this self-acclaimed leader, uses politically inclined medium to rain abuses on persons that do not patronize her. She has reduced herself to what is known in Kano political parlance as ‘political vanguards’ (Sojojin Baka). At least by her standing, she should not play that card. When she stormed the Government House, Kano the 2019 Presidential Election, Governor Ganduje refused to give in to her entreaty for monetary bait and hence her continued outburst in the media against the APC government in Kano.

The so-called firebrand politician also misfired in her analysis of the newly released report of the European Union Election Observation Mission (EU EOM) in Nigeria, 2019. While the report says supplementary elections were conducted in Kano as a result of failure to use smart card readers and over-voting in the March 9th Governorship and state Assembly election in Kano state, Naja’atu gave a different version of the report she imported from nowhere.

The report as presented by the EU EOM Chief observer, Marie Arena read thus: ‘’This followed elections being declared inconclusive due to the cancellation of a number of polling units on 9 March, and the total number of voters affected being more than the margin of lead. INEC listed electoral misconduct, violence, failure to use smart card readers and over-voting as the reasons for the cancellations. Manual accreditation procedures were not always correctly followed if card readers failed to authenticate fingerprints. The secrecy of the vote was not always sufficiently protected in nearly one-third of polling units observed.’’

Naja’atu also raised the issue of the creation of new emirates in Kano, ‘’and the impending deposition of the Emir of Kano, Muhammadu Sanusi II against all reasonable advice.’’  Here also, the writer twisted the fact. For whatever reason, this is not the first time new emirates were created. I must state clearly that Governor Ganduje has made it clear his intention to create the new Emirates. And up till now, the issues disposition of the Emir of Metropolitan Kano, to the best of my knowledge, is not on the table.

The self-styled anti-corruption champion is trying to look the other way as facts are emerging on the financial recklessness at the Metropolitan Emirate Council being investigated by the state Public Complaints and Anti-Corruption Commission. It is only the outcome of the investigation that will determine what happen next.

The writer, as a serving commissioner in the PSC which she did not quit and could not influence change, also delved into many security issues affecting the nation. While condemning the NPF as an existential threat to the prospects of the administration, she prophesies the toppling of the Buhari Administration, citing the example early this year, of a mere increase on the price of bread that led to an uprising in Sudan which toppled the 30 years authoritarian rule of Omar Al Bashir in spite of his particularly fearsome grip on power.

If your stance on anti-corruption is for real, why is it that you still remain in an institution you claimed is highly corrupt. Not only that, you continue to attack the Buhari administration on its fight against corruption, but still serving it. If this is not hypocrisy, Naja’atu should have quit the organization and pursue her so-called campaign against venality.

It is imperative to state in clear terms that the likes of Naja’atu should in their interest respect themselves and maintain the very little veneration the very few people have for them in the society. Government is about people and the people of Kano state have made their choice.

Abubakar is a public affairs commentator from Kano