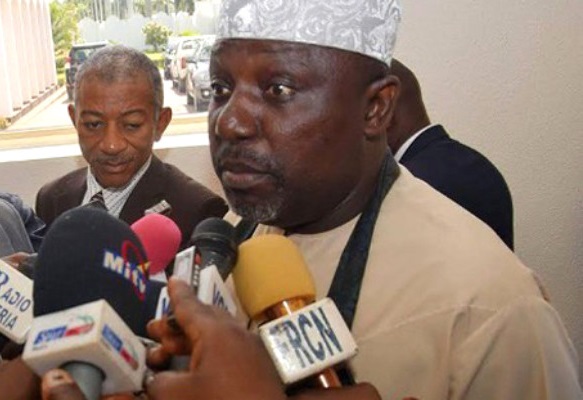 A consultant hired by  Rochas Okorocha, former Chairman of the APC Governor’s Forum and former Governor of Imo State, for the management and diversion of Paris Club Refund under the platform of Nigeria Governor’s Forum (NGF) has been a regular guest at the Economic and Financial Crime Commission (EFCC) and courts over investigation of misuse and diversion of the fund meant for the payment of salaries and pensions of civil servants.

The consultant was used by Governor Rochas Okorocha to divert 3m dollars of the NGF/Paris Club Refunds and has failed to fulfil EFCC  bail conditions.

The Economic and Financial Crime Commission had therefore offered the consultant prosecution witness deal to testify against Rochas Okorocha after May 29th or he would face litigation in money laundering, conspiracy, tax evasion and fraud case.

It is recalled that three Nigerian Governors believed to have diverted the London-Paris Club refund were indicted by the Economic and Financial Crimes Commission (EFCC), according to sources.

On November 6, 2017, the Nation Newspaper had reported that another slush account had been uncovered by the EFCC and Governor Rochas Okorocha, and two other governors including Chairman of Nigeria Governor’s Forum and their cronies are under EFCC investigation.

They were said to be implicated in the mismanagement and diversion of the refund and will soon face trial, after expiration of their immunity.

According to a source, who gave an update on the investigation of the refund, all suspects will be brought to book.

Security reports allegedly indicted some governors of gross abuse of the cash.

The source said: “As part of the ongoing probe, we have traced diversion of funds to three more governors and their cronies. This is apart from two governors who have  been fingered in such deals.

“Detectives have also uncovered another account opened by the Nigeria Governors Forum (NGF) where suspicious transactions related to the London-Paris Club refund have been found.

‘We have rated this new discovery as a slush account. This is aside the two accounts on which we placed Post No Debit (PNB).”

The source added that “more consultants have confessed that they were paid for jobs not done.

“So, we have cases of diversion of public funds into private accounts under the guise of consultancy fees. This explains why salaries have not been paid in some states”.

He went on: “We will release the details to the public very soon. All the suspects will certainly face trial. Those who have immunity will face the consequences, no matter how long it takes.

“Already, one of the governors has forfeited N500 million and another crony of the second governor has refunded $500,000 out of $3 million linked to his account.

“We have also applied for the forfeiture of over N1.823 billion by some consultants hired by the Nigeria Governors Forum (NGF).”

Following protests by states against over deductions for external debt service between 1995 and 2002, President Buhari had approved the release of N522.74 billion (first tranche) to states as refunds pending reconciliation of records.

Each state was entitled to a cap of N14.5 billion being 25% of the amounts claimed.

Minister of Finance Mrs. Kemi Adeosun said the payment of the claims would enable states to offset outstanding salaries and pension which had been “causing considerable hardship”.

The governors had sought for the refund to states and local governments at a meeting with President Muhammadu Buhari on May 24, 2016.

The Finance ministry said it was reviewing the impact of these releases on the level of arrears owed by the various states.

The Senate plans to probe how the refund and bailout funds to states by Buhari were approved.

Buhari is said to be weighing on whether or not to release the third tranche of the refund to states.

A Presidency source said: “Although the governors agreed at the National Economic Council meeting to demand for the third tranche, the President has the final say.

“From the security reports available to the President, some of the governors allegedly misused the refunds. A few of them devoted 20% -30% to payment of salaries. And some diverted the cash.”

Advocates of true federalism have argued that the Presidency has no right to held on to the cash because it belong to the states.

Our source said: “The most feasible option is to impose stiffer conditions  on how to access and use the refunds. There might be stiffer monitoring of the utilization of the London-Paris Club cash”.