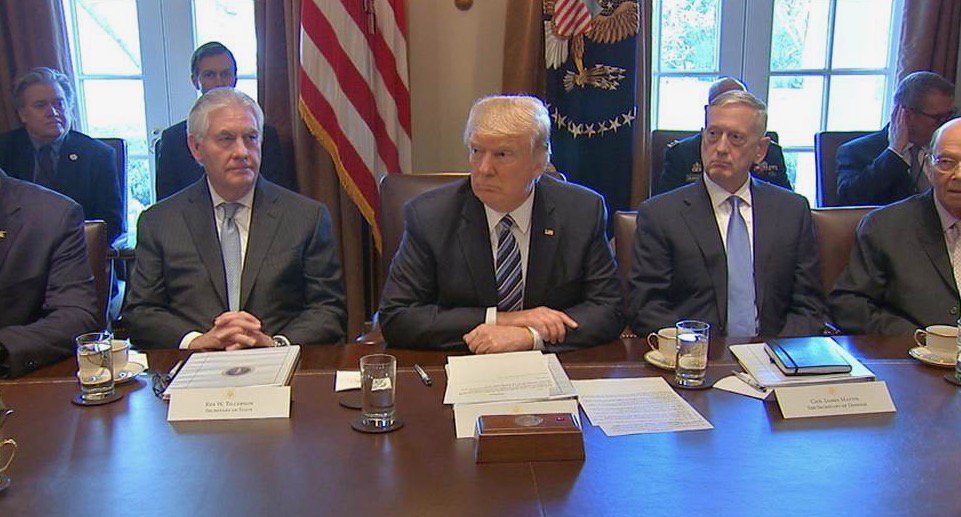 The chaos that characterized the incoming Trump administration in late 2016 and early 2017 is vividly illustrated in a bombshell report by Axios, which has obtained an abundance of leaked vetting documents from the transition to the Trump administration. And the documents offer insights on everyone from Gen. David Petraeus to former Kansas Secretary of State Kris Kobach.

The document on Petraeus shows the general in a positive light. Petraeus was considered for two different positions: secretary of state and national security adviser. But there was a red flag with Petraeus: the vetting document states, “Petraeus is opposed to torture” — which speaks well of him but evidently, was considered problematic by the transition team.

With Mick Mulvaney, Axios reports, there were a number of red flags — one of which is Mulvaney saying that President Donald Trump “is not a very good person.” Nonetheless, Mulvaney went on to serve in the Trump administration in various capacities and is presently acting White House chief of staff.

One of the red flags with former Secretary of State Rex Tillerson was the one-time petroleum executive’s ties to Russia. “Tillerson’s Russia ties go deep,” the vetting document on him reads. Regardless, Tillerson was confirmed as secretary of state, but Trump later fired him and insulted him on Twitter.

There has been a massive leak of Trump transition vetting documents to @axios.

Trump’s team considered it a “red flag” that General Petraeus is opposed to torture and that Mick Mulvaney concluded that Trump is “not a very good person.” https://www.axios.com/leaked-donald-trump-vetting-docs-hbo-6ce3cd26-1eb9-4da8-b15e-47b56020aef7.html …

Some of the contenders were strikingly swampy — even by the RNC vetters’ standards.

1,659 people are talking about this

The vetting documents for Kobach, who was considered for secretary of the Department of Homeland Security (DHS) by the transition team, illustrate his racism. Kobach was a prominent “birther” during Barack Obama’s presidency — that is, someone who promoted the racist conspiracy theory that Obama wasn’t really a U.S. citizen. And in Kobach’s vetting documents, “white supremacy” is listed as a potential problem.

Fox News host Laura Ingraham was considered for White House press secretary, but the red flag with her was, “Ingraham said people should wear diapers instead of sharing bathrooms with transgender people.” The position eventually went to Sean Spicer.