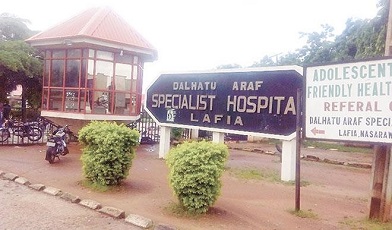 …. consultants, doctors on the run over poor condition of service

Patients and relatives alike has expressed discontentment over the recent hike in hospital bills by the new Chief Medical Director of Dalhatu Araf Specialist Hospital,Lafia.

Asmau Musa in an exclusive interview with universalreporters.ng appealed to the incoming administration under the headship of Engr.Abdullahi Alhaji Sule to consider the plight of the masses that voted him into power to reduce the high cost of medical bills.

A feeler from the Specialist Hospital averred that the present CMD,Dr.Ikram Hassan effected the sharp increase in hospital bills when he took over from his successor,Dr. Ahmed Yakubu Ashuku as people have access to medicare.

It was gathered that the management unanimously agreed to boost the Internally Generated Revenue through increase in hospital bills and drugs even with the introduction of Drug Revolving Fund,drugs purchased in DASH are too expensive.

It was revealed that a cap of Cenfrone,Beccham product which was sold for N1000 in some Pharmacy are sold in the hospital Pharmacy at N1,200 while a caplet of Paracetamol which sold for N100 goes for N200.

It was leanrt that the new management charged patients at the VIP ward N1000 daily for bed,Other serious issues affects operation of DASH was that 10 consultants has left the hospital due to stagnation and poor condition of Service.

Which issues which if left unchecked may plunged the hospital into pathetic huddle was the non-challant attitude of doctors referring patients to their private facilities.

It revealed was that with the presence of equipment at the various diagnosis centres some self-seeking laboratory technicians refered patients outside the hospital,this drastically affect the patronage of the hospital.

Is no longer news that patients whose ailments had to do with X-RAY,Scanning, Endoscopy, Histology have to wait for months no matter the condition of ones health.

“The worst aspect of treatment was for the hospital to refered you to Taimako Diagnosis Centre for Scanning and X-RAY it would take up to one week”an insider said the machine was completely obsolete”.

According to a competent source who pleaded anonymity said absence of “State of the Art” facilities foist patients to go outside.

It could be recalled that the State Chairman of the Nigeria Medical Association,Dr.Bulus Peter Umar while briefing Journalists during the last three days warning strike at the NMA office along Makurdi road confirmed that 10 consultants from DASH left due to stagnation,poor condition of service and high taxation.

NMA Chairman attributed the mass exodus of 10 consultants and scores of doctors from the service of DASH to harsh condition of service,lack of promotion and heavy taxation scared away doctors.

He says heavy taxation and stagnation since 2012 are some of the issues affecting the hospital and no frantic measure was taken by the State government to addressing the ugly situation.

The Chief Medical Director,Dr.Ikram Hassan when asked about the mass exodus of doctors from DASH confided that only 2 consultants left not 10.

The CMD who spoke through the Public Relations Officer of the hospital further debunked that there was no any hike in hospital bills.

“On the issues of available facilities, Deborah Dangara hinted that some facilities are intact while some are outdated”.