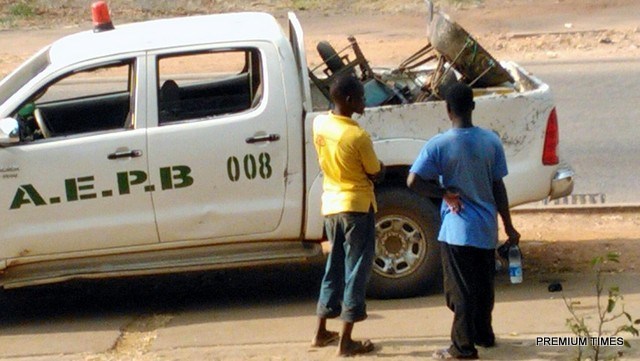 It is scary to be a woman in Abuja. Like me, hundreds of Abuja residents were rudely awakened to the horrors of the brutality meted out to over 100 women in Abuja, the capital of Nigeria, from 24-27 April 2019, by law enforcement agencies comprising members of the Abuja Environmental Protection Board (AEPB), the Nigeria Police Force, the Social Development Secretariat (SDS) and the Society Against Prostitution and Child Labour in Nigeria (SAP-CLN), among others.

The young women were picked up from several spots across Abuja; night clubs, restaurants, and pharmacies to kiosks, around midnight. They were all arrested, forced into vans and driven to nearby police stations. Those who resisted the arrest were beaten. Most of the women arrested had their breasts and vaginas groped by their male arresters, in search of “exhibits and evidence” as recounted by one of the survivors, who also said that all the women were accused of soliciting sex, forced to plead guilty at a mobile court in Abuja and given the option of paying a fine of N3,000.00, sex for bail, or getting jailed for up to 6 months. According to her, many women who refused to be wrongfully accused were beaten, tortured and raped and that she, alongside two other young women, were raped by four male police officers. Some were tear gassed, while others had their vaginas assaulted with objects.

An investigative report documented by Premium Times, Vanguard and Centre for Women’s Global leadership suggests that what is happening is a sex ring; ‘a racket and conduit for diversion of government funds’, dating as far as 2012. It reveals that the AEPB in partnership with SAP-CLN carry out raids to get ‘prostitutes and the destitute off the streets of Abuja and rehabilitated’; a project which the Federal Capital Territory (FCT) invests hundreds of millions of Naira to implement.

While there has been a sustained outcry over the sexual brutality of the Nigeria Police Force and other law enforcement agencies on the bodies of women, what is currently happening is a reflection of the culture of the larger society in Nigeria where women are treated as less than human beings and objects for men’s sexual pleasures. “Many boys and young men see young women and girls as sport or game. They compete with one another over how many girls or women they can sleep with”, says Ken, a security specialist.

Women are highly affected by Sexual violence and abuse in Nigeria notably through harassment in politics, schools and in the workplace, intimate partner violence, under-age marriages, wife inheritance, and child rape among others. The way a woman dresses has also been used to justify harassment and rape. As Dr. Eleanor Nwadinobi, a medical doctor and expert on health, gender, women, peace and security puts it, “how a woman dresses should never be a reason for her to be raped by a man. We must train our boys and men to zip up. The burden of proof should always be on the man to prove that he did not step outside the boundaries of respect. For some of us, our great grandmothers wore jigida (waist beads) and yet they did not suffer sexual violence”.

Some concepts have tried to explain the root causes of sexual and gender based violence. The first believes that biologically, men are more aggressive than women, have more sexual dispositions than women and are unable to resist the urge to rape due to their high levels of testosterone. The second leans on socio-cultural reasons; that patriarchy positions women as possessions and easy targets for sex and rape, while the third concept looks at rape and sexual violence as strategies to achieve political, social and economic power in order to suppress and destroy. I want to add that it is also important to look at the way men socialize (call it the ‘guy code’ if you may) – there seems to be a certain bond among men – they get along with their fellow men be they strangers or enemies, detest a woman who trashes other men, protect and respect their daughters, sisters and mothers (but may not extend the same courtesy to other women), and tend to keep their fellow men’s secrets secret even when they have done something wrong.

The above behaviors seem harmless but could form part of the culture that ends up hurting women. Speaking on her experiences, Ifeyinwa, a Political Science lecturer at the National Open University in Abuja, observed that “sexual abuse on women is shrouded in secrecy – a man repeatedly harasses several women in the work place because no one reports it, even when caught red-handed, his male colleagues protect him and say things like ‘we are men; we protect each other’. She added that “a huge responsibility lies on mothers to teach their children especially the boys about respect for values and for the opposite sex.”

“Any man, who tells you that he will not think of having sex with a beautiful, sexy woman, is lying. Men are easily socialised thus they advance women easily. When they are rejected, it bruises their ego. It’s like a lion in the jungle thing, a territory thing and a man feels he needs to conquer the woman who rejected him before moving to the next conquest. Many men who abuse women use it as a show of power and control,” reflected a traditional ruler, on the causes of sexual violence and rape.

Patriarchy and power relations have ways of placing the male folk on the higher level of the repressive hierarchy of the society. By placing the male folk at this higher level, it gives privilege and a sense of entitlement  to the male desire over everyone and everything else – the female body is thus subjected to the control of the male folk and must be had however, whenever, and wherever he wants it. It is this repressive subjugation of the female body that gender scholars, like Simone de Beauvoir, in her work, ‘The Second Sex’, and Judith Butler, in her works, ‘Gender Trouble’ and ‘Bodies that Matter’, deprecate. The privileging of male desires in a patriarchal society always ends up producing scary sexual orientation and sexual violence which women often experience in most men of today’s Nigeria. To put it bluntly, it is this culture of privileging and entitlement that allows officials of the Abuja Environmental Protection Board (AEPB) to target any woman found having good nights-out in bars and lounges in Abuja as easy lay.  This is downright scary. Isn’t it?

Finally, in establishing and continuing to fund the FCT Joint Task Force, the State has created a Special Purpose Vehicle (SPV) that it maintains and empowers to harass and sexually exploit women. The uncouth, randy and corrupt elements in public service, in cahoots with their thugs, have taken advantage of the SPV to prey on vulnerable women without risking any social reprimand or legal punishment.

Moral Decadence in Our Society: Whose Fault? – By Isyaka Laminu Badamasi