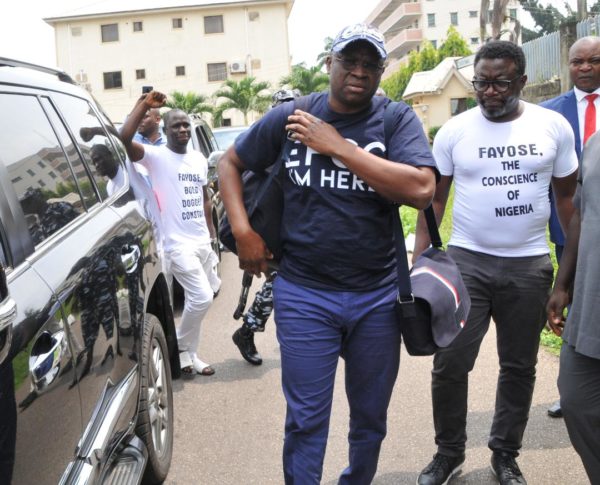 Barely 10 minutes after contradicting himself, a witness of the Economic and Financial Crimes Commission (EFCC), Adewale Clement Aladegbola, who was called to testify against a former governor of Ekiti State, Ayodele Fayose, was on Friday picked up and whisked to an unknown destination.

As at the time of this report, the whereabouts of Aladegbola, a former bullion van driver with Zenith Bank, Ado Ekiti branch till 2015, remained unknown.

Fayose is standing trial by EFCC of at a Federal High Court in Lagos over alleged misuse of public funds.

He was arraigned on an 11-count charge on October 22, 2018, alongside a company, Spotless Investment Ltd.

The former governor, however, pleaded not guilty, and was granted bail in the sum of N50 million with one surety in like sum. EFCC opened its case on November 19, 2018.

In contradicting himself, the witness said he was told to lie by the Zenith Bank’s Cash Officer, Okiemute Oputu that he moved cash from Afao Ekiti, Fayose’s hometown.

The Counsel to EFCC, Rotimi Jacobs (SAN) had asked the witness to tell the court what transpired on April 16, 2015, in relation to cash operation in the bank.

He said that on April 16, 2015 when it was claimed he moved cash from Afao Ekiti, the Zenith Bank bullion van was grounded and there were no operation.

Obviously shocked by the witness contradictory evidence, EFCC lawyer, Jacobs hurriedly asked for adjournment, while the man was whisked away by the commission’s security operatives.

When asked to tell the court what transpired between him and one `Alfa’ named Okiemute Oputu, the witness said that he got to know him in August.

“He told me about the cash they had picked and that we need to cover up as if we had gone to pick it up officially, and I asked him: `What do you want me to do now as you said I was not aware?’”, Aladegbola said.

At this point, Jacobs told the court that the witness was departing from the contents of his extra judicial statement to the EFCC.

“From the evidence this witness is giving, it appears he is trying to be hostile; he made a statement to the EFCC and now, he is trying to depart from the statement”, Jacobs informed told the court.

He prayed the court for an adjournment to enable him to contemplate on the application to bring before the court on the development.

According to them, departure of a witness from his extra judicial statement is not sufficient grounds for an adjournment.

Citing the provisions of Sections 230 of the Evidence Act, Ojo argued that the law required the prosecution in such a situation to cross-examine the witness.

Although, Justice Mojisola Olatoregun queried why prosecution could not instantly cross-examine the witness, she adjourned the case until May 14 for continuation of trial.