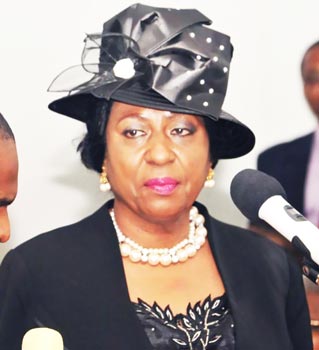 The National Industrial Court, Abuja, has ordered the National Judicial Council (NJC), and its Secretary,  to produce records of proceedings in the compulsory retirement case of former Chief Judge of Abia, Justice Theresa Uzokwe.

The judgment also ordered the respondents to accept lodgment of the applicant’s Notice of Appeal.

Justice Kiyersohot Damulak in the judgment said” the granting or refusal of an order of mandamus is at the discretion of the court and such, discretion must be exercised judicially and judiciously.

” The implication is that an order of mandamus can be rightly be made to enable the claimant pursue his rights as guaranteed by law. I so find and hold”, Damulak said.

The judge further said by Order 3 Rule 13 of the Industrial court, the applicant had an option of filing a complaint against an award or decision of an Arbitral Tribunal, Board Unions or any authority in respect of any matter within the jurisdiction of the court.

He added that by Order 3 Rule 16 (3), such complaint must be accompanied by a Record of Appeal, which the respondents had failed to oblige the applicant with.

He added by saying ” the above rule states that even when the applicant decides to file a complaint, he is going to need a Record of Appeal.

” There is therefore a compelling need for an order of mandamus to enable the applicant pursue his rights before this court.

“I so hold, on the whole, the application has merit, it succeeds and the court hereby make the following order;

” An order of Mandamus compelling the respondents to accept lodgment of the applicant’s Notice of Appeal, compile the Certified True Copies (CTC) of the Record of Proceedings and furnish/transmit the processes to this Honourable court” he concluded.

News Agency of Nigeria (NAN) reports that the NJC in March, 2018 recommended the compulsory retirement of Uzokwe following findings of two investigative committees it instituted to look into petitions of misconduct against her.

Uzokwe through her counsel, Nmamdi Nwokocha-Ahaaiwe had instituted the suit for an order of the court to make available the CTC of the verdict among other processes as granted by the same court in July,2018.

Nwokocha-Ahaaiwe in the statement of facts said that in October 2018 when they went to lodge Notice of Appeal on the respondents, they took one copy and refused to endorse receipt.