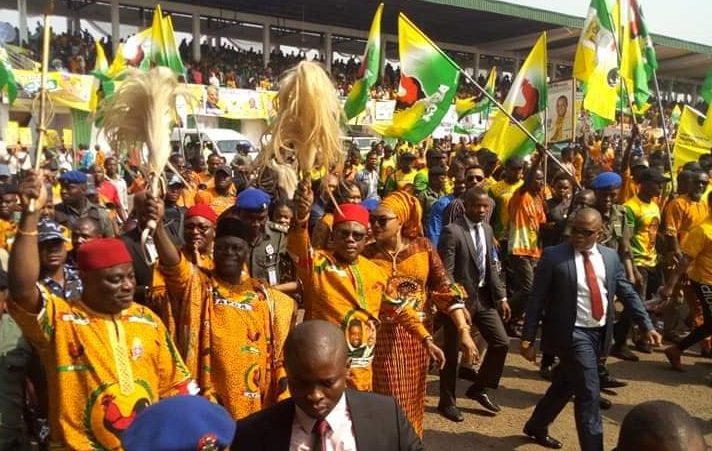 A political pressure group, the Old Awka Forum (OAF), on Monday, expressed its unalloyed support for the second term bid of Dr. Victor Oye, as National Chairman of the All Progressives Grand Alliance (APGA).
The group, made up of chieftains of APGA in Awka North and Awka South Local Government Areas of Anambra declared its support for Oye at a solidarity and endorsement rally in Awka.
Igwe Kenneth Okonkwo, the Traditional Ruler of Amansea Community in Awka North, who was the chairman of the occasion, said that Oye had done well for APGA to deserve re-election.
Okonkwo said they were supporting and endorsing him for another four-year tenure “so that members of the party across the country would know he enjoys the full support of his people.”
The traditional ruler said APGA had grown steadily under the national chairman and members of his team with convincing victories in a states across the federation.
Also, Mr Harford Osseke, the Deputy Speaker, Anambra House of Assembly, said that the group was advocating that Oye should be returned unopposed at the convention.
Osseke described Oye’s “pragmatic leadership style” as highly commendable.
He said that his tenacity, courage and benevolence had earned APGA greater glory, making it a preferred brand in the country.
He said: “For the overriding need to sustain the development and consolidation of the achievements of APGA, Oye deserves a second term.
“We, the entire APGA faithful in the 19 communities that make up Awka North and Awka South council areas, the OAF in support and solidarity for our own brother, do affirm and endorse Oye for the coming convention.
“We therefore call on Gov. Willie Obiano, the national leader and Chairman, Board of Trustees of APGA, and members of the National Executive Committee, to make favourable considerations and approval of this second term endorsement by OAF.”
In his remark, Oye thanked the group for its support and promised to work harder for the emergence of APGA as the best alternative party for Nigerians.
Dr. Ifeyinwa Obegolu, a former national commissioner of Independent National Electoral Commission, delivered a lecture at the rally, with the theme, “Managing the political development of APGA: need for sustainability.”