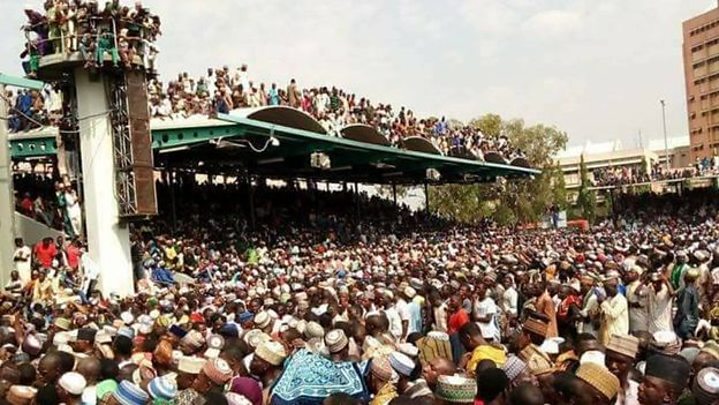 A statement from Sheikh Dahiru Usman Bauchi Foundation  signed by Ahmad Mohammed Saka Chairman Publicity sub committee which was distributed to reporters in Bauchi said The  ceremony, which commences with Arrival of guest from Wednesday 3rd th April, Three days Makon Shehu week long events from (Wednesday, Thursday and Fridays) has started  with the opening ceremony and lectures by imminent Islamic Scholars at the National Mosque Abuja,  Which was attended by Emirs, Scholars, and delegates from within and outside the country.

Leader of Tijjaniyyah Sheikh Dahiru Usman Bauchi whose Foundation organized the International Maulud said that the event was organized to honour a servant of God  Sheikh Ibrahim Nyass who dedicated all his life towards the services of Islam, and whoever did a Good things he should be commended and remembered Shehu Ibrahim lives an exemplary life filled with fear of God and noble character.

Sheikh said the event show the light and strength of Islam, and urged Security agencies, the People of Nigeria and neighboring states where guest will pass through on their way to the Venue and on their way back to their homes to be hospitable and be their brother’s keepers.

The Scholar said People should not be panic because of the mass movement of People through all directions from within and outside the country.

He said the programme was designed to improve relationship among followers of Tijjaniyyah across the globe and immortalize the late Islamic Scholar.

He said “The essence of the celebration is to further cement the existing mutual relationship of the adherents of Sheikh Ahmadu Tijjani all over the world, to immortalize and commemorate the legacy and teachings of the Sheikh and to pray for peaceful co-existence of the entire nation”.

Chairman of the Steering Committee Alhaji Ibrahim Sheikh Dahiru Usman, said that  prominent Islamic, clerics from Morocco, Algeria ,Mauritania, United States of America, Mali, Egypt Senegal, Sudan, Ghana, Cameroon, Niger and other European and African countries are expected to grace the occasion.  President Muhammadu Buhari GCFR will be the distinguished Guest of Honour at the occasion

Grand Khalifa of Sheik Tijjani  Sheikh Muhammadul  Kabir, The Grand Khalifa of Sheikh Ibrahim Nyas Sheikh  Ahmad Tijjani  Nyass , The Chief Imam of Sheikh Ibrahim Nyass Mosque Sheikh Tijjani Aliyu Sise, and  Sheikh Sherif Umar Hafid  and other Prominent Islamic Scholars from within and outside the country are expected to address the gathering at the occasion

He said, prior to the grand finale of the occasion on Saturday 6th April at the National stadium Abuja

the Sheikh’s week (makon Shehu)  was slated for Wednesday 3th April to Friday 5th  April, 2019. The chairman reiterated that  the grand finale of the event will come up at the National Stadium , Abuja between 10am to 1:30pm on Saturday 6th April 2019 equivalent to 30th Safar 1441AH.