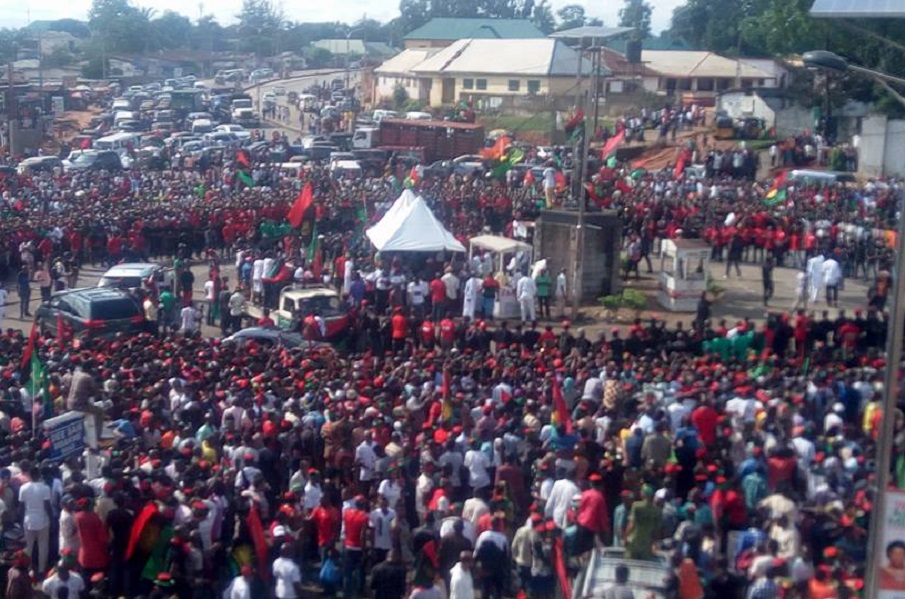 We the global family of the indigenous people of Biafra (IPOB) ably led by Mazi Nnamdi Kanu wish to reiterate once again that the arrest and intimidation of Jewish adherents yesterday 11th December, 2018 during their peaceful procession in the city of Umuahia to sensitize general public about their denominations was unconstitutional. The barbaric attack on the innocent Jewish worshipers exercising their legitimate rights by combined security forces is totally abnormal and unacceptable, the IPOB and other Jewish adherents across the whole world cannot allow those behind the evil acts to go Scot free.

IPOB must continue to write and tweet world and religious leaders extensively in the coming days to condemn the persecution and arrest of our religious adherents who committed no crime against anybody or Nigerian state. We will go after the perpetrators of this sacrilegious act against the Jewish adherents of the oldest religion in Umuahia and those who were deceptively saying that IPOB was involved in a show of force with the police yesterday in Umuahia, Abia state. We must correct this misleading impression before it gains ground because most gullible might accept that IPOB was involved in any fracas with Nigeria security forces when nothing like that ever happened.

Biafrans wherever you may be should never underestimate the poison dripping from the tip of the pen of certain individuals in the pay of the government who are in the habit of always saying IPOB was involved in a rally when such never happened.

The peaceful procession yesterday was the prerogative of our traditional Jewish Religious Adherents not IPOB and cannot be. This is the fact and one that must conveyed to counter the lies of the enemy. We continue to wonder why Abia State Police Commissioner and other pro-APC elements are twisting this story to make it what it’s not.

There are more than 50million Biafrans practicing Judaism in various forms from the beginning of time before the creation of this evil contraption called Nigeria by British in 1914 and establishment of IPOB in 2012. These are facts we cannot escape from. Okezie Ikpeazu must release those he ordered their detention. The fact our leader Mazi Nnamdi Kanu and others practice Judaism does not mean every Jewish religious member is an IPOB member.

We in IPOB do not hide or disguise our appearance since the inception of this divine movement and we have no reason to do so. We have always maintained our fearlessness before our enemies.