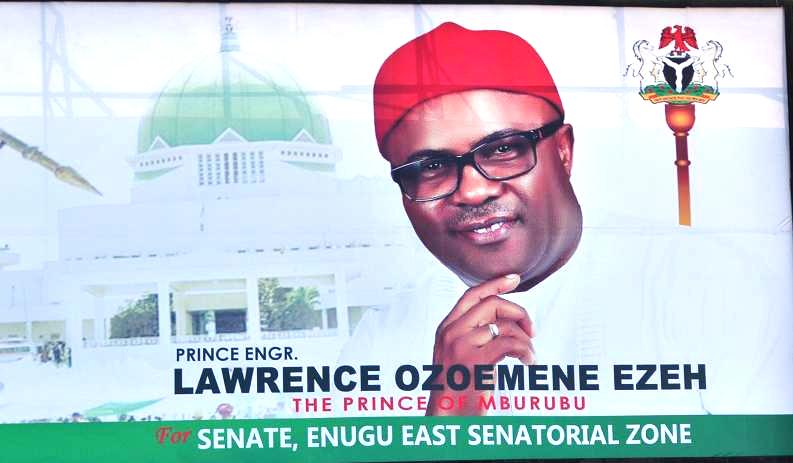 Prince Lawrence Eze is the Enugu East Senatorial candidate of the All Progressives Congress. In this interview with 247ureports.com, he said that Senator Chimaroke Nnamani has no political value again for the zone and should not be allowed to return to the senate. He also said that voting for Nnamani would amount to subjecting the entire Enugu east senatorial zone to political oblivion  for another four years in the hands of a retired man. He equal speaks on the allegation of  threat to lives reports against him, describing it as a fake news.

Is there any petition against you before the police or any other security agencies?

None that I know.

How come about the allegation that you threatened  to kill someone?

Actually, I don’t think I want to delve into that conversation because  till today I have not got any form or formal invitation from anyone alleging that I have any hand in any matter alleging threat. So as much as I know I don’t know of any petition against  lying anywhere. I only heard such a thing from the media and of course, the press is not the police and if the press were to be police, maybe,  I would have got a formal invitation. I think these things are purely manipulation from the government house, or the opposition. Besides that, anybody can just sponsor anything in the press. I think it is being sponsored from the opposition but I don’t think there is substance in that publication because from the time it was published till now it is over a week and I have not gotten any invitation from any security agents. So there is no iota of truth in that.

What makes you think it is from the opposition?

In politics, of course, you will always have issues from opposition. The issue is that the opposition wants what I want too. naturally,there  should have issues. when you want the position they want that is more than enough issue. When people know that you want what they want and they know you are in better position to take what they want, they will always look all these none issues and try to distract you. These are just mere divisionary.

How are you going to confront the ruling party in the state?

I am already prosecuting my election. And for the allegations they are throwing up, I have ignored them. You don’t give attention to all those things; you give attention to those things that have substance. You have a destination and your destination is Abuja and you are on your way going and someone is calling you somewhere in Obollo-Afor, will you have any reason to stop over in Obollo-Afor when your destination isAbuja? We are heading to Abuja and we don’t have any reason to stop listening to some petty talks. Though we expect such talks in this contest, those in the press even  expect more. These things come up because they see me as a star candidate. They see me as the leading candidate in Enugu East senatorial district and this is what have put the entire opposition in confusion. The party is jittery. So when these things come up, we are not surprised. we are expecting more to come but as they come we keep glossing over them and keep going because when once there is something that has a substance then, we can sit-down and address them. But this ones that are coming now are no issues.

Recently, you granted interview to one of the dailies where you said that your senatorial zone doesn’t want absentee senator. What do you mean?

I didn’t say that I don’t want absentee senator. Enugu East senatorial zone said so, not me. The entire zone, the entire Nkanu land said they  don’t want an absentee senator. Let me tell you something; in my place we have this adage that says that ‘you don’t ask someone that is returning from the market to please buy something for you from the market, you give money to someone that is on the way to the market to buy something for you’. What that simply implies is that Chimaroke is retired. He is completely packed up politically. At his age he was governor for eight years, senator for four years. Just in the manner of Senator Jim Nwobodo, Senator Ken Nnamani and unlike he is supposed to have retired fully as an elder statesman. So going to ask Chimaroke to go to Abuja to represent you is as good as asking him to go and represent only but his humble self because he is never going to have time for you. Everything Chimaroke feels he owes Nkanu people, he is completely sure he has given it when he was  governor, when he was in the Government House. Anything you expect from him you are expecting much more than is required from him he cannot give you anything new. You cannot even access him, he is not accessible. How many of you will have access and walk into his house and interviewed him, he is not there for anyone. He just there for himself. So we are looking at people who are political hopefuls, people who have future political ambitions, people who still have a whole lot ahead of them. These are the kind of men we need right now in Enugu East senatorial zone. people who will go all out to make sure that they will prepare a better political future for themselves, in a bit to get that done they will put in the best of themselves to be able to prepare that future ahead. Because if at this my age I cannot build a political future for myself, I will have nothing to fall back on tomorrow. The age different between myself and Chimaroke is between 15 to 20 years and at his age I should be retiring as well. So, I still have an active 20 years ahead of me to inject more fresh blood into the system. So if at this level we cannot get things right by getting it into the hands of those that are retiring then we get our entire senatorial zone retired for another four years in the hands of a retired man.

Despite Repeated Pleas, Sen Akpabio Betrayed His People And Slighted A Party That Brought Him Honour And Fame – Barr Enoidem