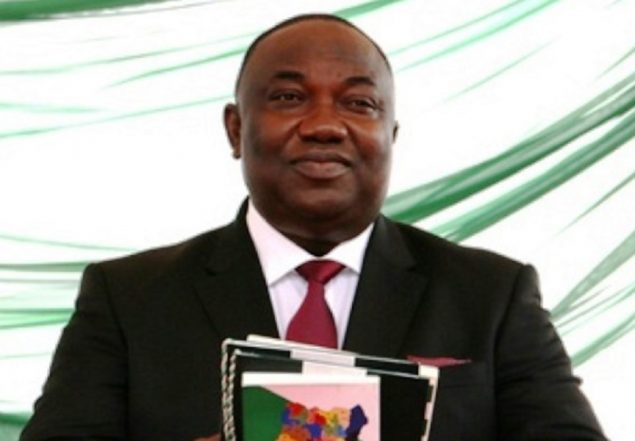 The Deputy President of the Senate, Senator Ike Ekweremadu, and Governor Ifeanyi Ugwuanyi of Enugu State have commended the Federal Government for commencing the rehabilitation of the 41-kilometre Ozalla-Akpugo-Amagunze-Ihuokpara-Nkomoro Ebonyi federal road.

The road, earlier awarded in 2010, stopped due to poor funding, but was re-awarded by the present federal administration following the intervention of Governor Ugwuanyi, Senator Ekweremadu, and other federal legislators from the State.

Speaking during the flag-off of the project on Sunday, Governor Ugwuanyi appreciated the synergy among the federal lawmakers from the State, which he said, contributed highly to the commencement of work on the road.

“What we are witnessing here is the gift of synergy among the National Assembly Members from Enugu State led by Senator Ike Ekweremadu.

“On behalf of Ndi Enugu, we appreciate the Federal Government for acceding to the request by the State for the road rehabilitation, which will bring about socio-economic transformation to the people”, he said.

In the same vain, Senator Ekweremadu applauded the President Muhammadu Buhari administration for making funds available for the project.

He explained that the initial challenge faced by the project was because it started as a Constituency Project under Hon. Peace Nnaji, which usually suffers setback in terms of continuity, especially when the lawmaker that initiated it did not return to the National Assembly, stressing the need for constituents to have experienced hands in the parliament.

He, however, explained that the road had now been awarded as a full project under the Federal Ministry of Power, Works, and Housing, commending Governor Ugwuanyi for his cooperation with the members of the National Assembly to ensure the reactivation of the project.

He added that the Governor mandated them to ensure that no federal road in the State was abandoned.

“I would, therefore, like to express our special gratitude to the FG for making funds available to continue this project and also call on them to step up efforts on roads in the South East”.

The Managing Director of Arab Contractors, the firm handling the project, Engr. Mohammed El-Eldaros, assured of timely delivery of the project and called for the cooperation of the beneficiary communities.

Ekweremadu and Ugwuanyi also inspected the ongoing 27 Km Nenwe-Nomeh-Mburumbu-Nara Road Project with a spur to Oduma, where the MD of Arab Contractors, Engr. El-Eldaros, explained that all encumbrances such as compensation had been settled, while the rain had receded and all was set for intensive and speedy work on the project.