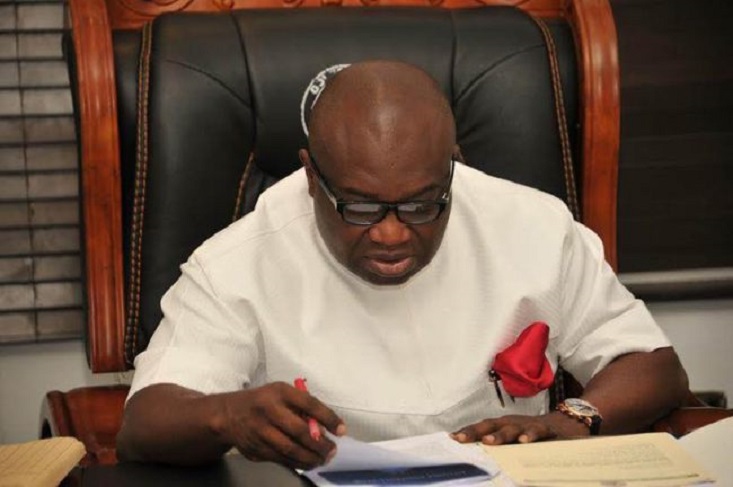 A group, Ibeku Youth Assembly has warned the Abia state Governor, Okezie Ikpeazu against any move to depose the father of the leader of Indigenous Peoples of Biafra(IPOB), Eze Israel Kanu as the traditional ruler of Isiama Afaraukwu Ibeku.
This came following an alleged call by Umuahia Youth Movement, asking Governor Ikpeazu to depose Eze Kanu over the refusal of the his son and IPOB leader, Nnamdi Kanu to jettison the agitation for Sovereign state of Biafra.

Loading ...
The group vowed to resist such move by the faceless organization whom it alleged was sponsored by a chieftain of a particular political party in Abia state.
Ibeku Youth Assembly in a statement signed by its secretary, Mr. Ihechi Chinedu Zik and issued to journalists in Umuahia on Saturday, said it would not tolerate such plan by the unscrupulous elements to depose the highly respected monarch in Abia state and the country as a whole.
The group said it would shut down the state capital, Umuahia if governor ikpeazu heed to the call by the Umuahia Youth Movement  to remove Eze Kanu.
According to the statement;”We are calling on Governor Okezie Ikpeazu not to heed to the call by the faceless group that Eze Kanu should be deposed over the Biafra agitation by his son, Nnamdi Kanu. Because to our knowledge, Eze Kanu has not done anything wrong”. Nnamdi Kanu agitation for the sovereign state of Biafra is his fundamental right. So the question is “where did Eze kanu faulted?
” We will resist such move by this group, consists of disgruntled elements who are being sponsored by a politician from a particular political party in Abia state.
“Any attempt by the state government to remove Eze Kanu will spell doom for the state and we will ensure the state is shut down if such plan is carried out”.
” We are also condemning the alleged invasion of the residence of Eze Kanu by soldiers in search of his son, Nnamdi Kani. We call on  President Muhammadu Buhari to withdraw soldiers, nicknamed “operation Python Dance 11” from the street of Umuahia following cases of killings by Nigeria Army.
“We are living in fears due to the heavy presence of soldiers. Umuahia is not a war zone. People are being killed like animals in Umuahia. It is condemnable the unwanton killing of IPOB members, who are only exercising their right.
” We are calling on the federal government of Nigeria to toe the path of dialogue rather than unleashing on slaughter against innocent members of IPOB who have never carried arms against government.
Meanwhile, Ibeku Youth Assembly has described as illegal, the labelling of Indigenous People of Biafra(IPOB) as a terrorist organization by the Nigeria Army.
This is even as the youth body condemned in strong terms, the proscription of IPOB activities in south east zone by the south east Governor’s Forum-led by Governor Dave Umahi of Ebonyi state.
Ibeku Youth Assembly in a statement issued to journalists in Umuahia, the Abia state capital on Monday, warned against further military action on IPOB members, stressing that the pro-Biafra group has not committed any treasonable acts for it to be labeled as terrorists organization.
The group wondered how a non-violent group like IPOB would be categorized as terrorist’s group when the Fulani herdsmen which President Muhammadu Buhari is their patron  had killed dozens of innocents citizens have been classified as terrorists.
IYA warned the operation Python Dance 11 of Nigeria military to be cautious in its activities in Abia state and south east  while dealing with Biafra agitators.
The youth body described governors from south east zone as saboteurs and enemies of Ndigbo , saying their decision, proscribing IPOB activities in the zone was to secure their second term ambition with the support of the federal government of Nigeria.
The statement reads,”Our attention has been drawn to the categorization of IPOB as a terrorist organization by the Nigeria Army.
“We, Ibeku Youth Assembly viewed it as illegal. Because since IPOB started its agitations for a sovereign state of Biafra, they have been conducting themselves peacefully without arms.
“So, we wondered how the Army will classify IPOB as terrorist’s group, when the Fulani herdsmen that have killed many innocent citizens of this country have not been labeled as terrorists.
” IPOB as we know, has not commit any treasonable act that will warrant the army to pronouce it as terrorist organization. We appeal to the Army to be cautious in their operation while carrying its activities in Abia state and south east zone in general. Again, South east is not a war zone.
“Our governors from south east zone met in Enugu and took decision, banning IPOB activities in the region. In our opinion, we don’t think this is the right time to do. We believe that the decision banning IPOB in the south east was taken by governors due to their second term ambition. Because they do not want to identify with IPOB due to fears of losing second term bid election.