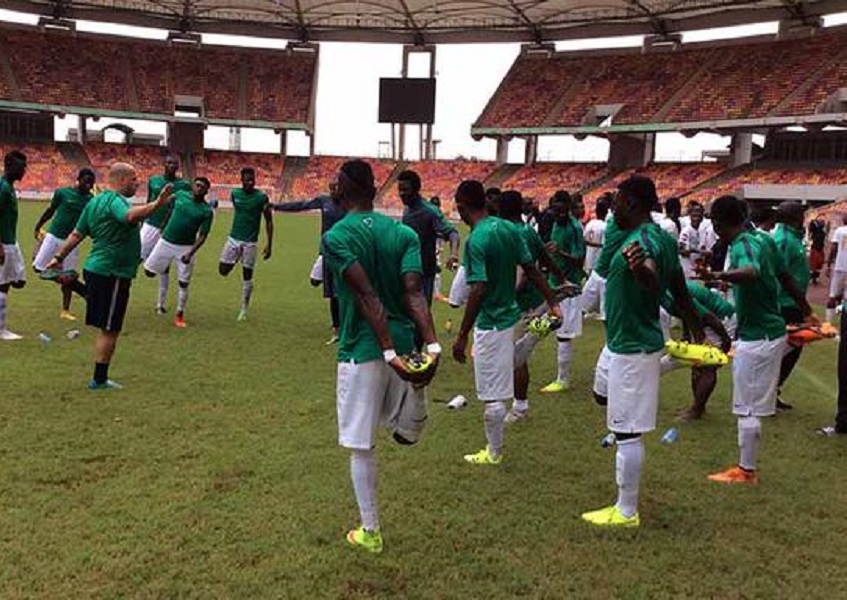 As the September 1 crucial World Cup qualifying match between the Super Eagles and Indomitable Lions of Cameroun draws closer, Akwa Ibom State Governor Udom Emmanuel says the Eagles deserve the support and motivation of all.

The governor who was speaking when he played host to the NFF Chairman, Amadu Pinnick, said Nigerians should continue to believe in the team despite the result of the last game in Uyo.

Mr Emmanuel said the importance of the Nigeria-Cameroun World Cup qualifiers tie made him to shelf international official assignment to ensure that he is on ground to mobilize for the Super Eagles as their number one supporter in Akwa Ibom State.

He thanked the NFF for retaining Uyo as home of the Eagles, noting that such confidence will be justified with support and motivation for the Super Eagles to soar through the huddle and hoist the nation’s flag in the World Cup.

He said this has necessitated his plans of involving chief psychologist in the University of Uyo to assist the team psychologists and prepare the players for victory.

His words, “Coming back to Akwa Ibom is always a motivation. Self-confidence is necessary when you are in the battle front. After the last match, there were a lot of comments. I thank the NFF. They believe in themselves, they believe in the players and they believe in Nigeria. That is what we need at this time.”

The governor said it was not in error that the match day coincides with a statewide prayer meeting that defies religious beliefs preparatory to the 30th Anniversary of Akwa Ibom State. According to him, this spiritual exercise would yield positive result not just for Akwa Ibom State but the Super Eagles.

Speaking on his visit to the state, NFF President Amadu Pinnick thanked the sports –loving Governor Emmanuel for his significant role in football development in the country, through the support for the hosting of the national soccer team in Uyo.

Mr Pinnick re-affirmed that Uyo will remain the home of the Super Eagles because of the extra-ordinary support from the fans in the state.

“Whatever friendly that we need to play will still come to Akwa ibom, on the 9th of October, Nigeria will be playing Zambia here again in Akwa Ibom.

He announced an invitation to Governor Emmanuel to lead the delegation to Algeria for the return leg leg of the qualifiers.

He congratulated Governor Emmanuel for the vigour brought to Akwa United team, saying this has resulted in the team’s emergence as federation cup champions two years ago and currently contending for the Premiership title in the elite division of the league.

“When you hear stories that we want to move, No!No!! No!!! this is a home, I am the president of NFF, we are not moving an inch from this place,” he added.