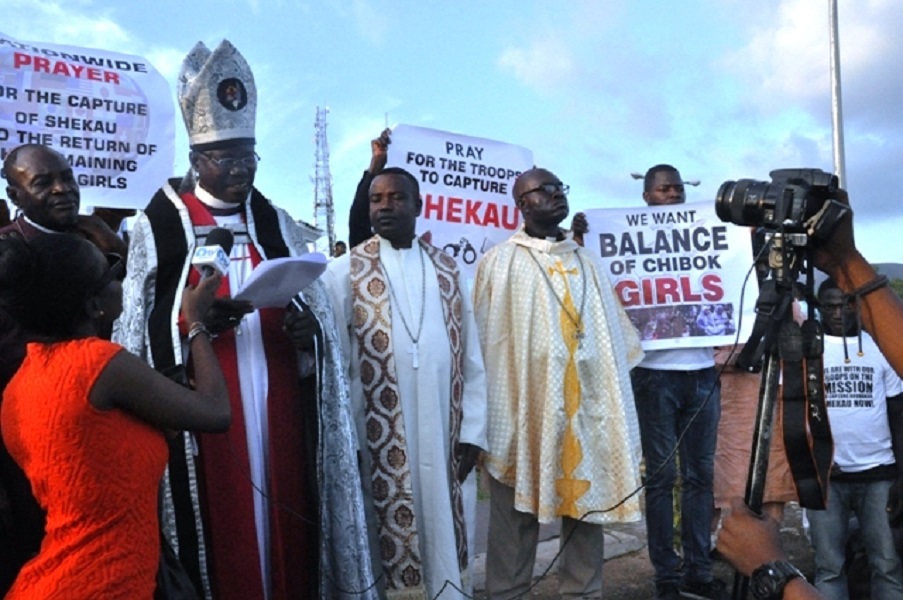 Nigerian clerics, numbering over 500 stormed the city of Abuja on Wednesday to pray for the capture of the kingpin of the Boko Haram insurgents, Abubakar Shekau.

The clergymen, drawn from many religious backgrounds also called on Nigerians to intensify prayer for the safe return of the remaining Chibok girls.

Recall that the Chief of Army Staff, Lt. Gen Tukur Buratai had vowed that Shekau will captured in no distant time.

Addressing newsmen at the Unity Fountain in Abuja after the prayer,  the national coordinator, Bishop Musa Fomson said the prayer became imperative following the recent declaration by the army that Shekau must be captured dead or alive in not more than two months

According to Bishop Fomson, the clerics had the burden of seeking God’s intervention to end the menace of Boko Haram in Nigeria at a time when it was wrongly passed off as a conspiracy to frustrate the then President Goodluck Jonathan-led government.

He said, “At that time, the insurgents had seized so many Nigerian Local Government Areas that were the equivalent of three states; the groups atrocious activities had spread across the northern parts of the country and had reached southwards as far as  Okene in Kogi State.

“It is also on record that before our intervention, the group continued to abduct and take women, children and the aged into captivity from their villages into captivity.

“We stood in the gap for Nigerians in line with the mandate that this group to holds a nationwide prayer for the President and our country.  The outcome of heeding God’s leading is that we were able to make supplication for God to enthrone the leader of his choice for Nigeria, a leader that would end that reckless era of killings, blood and sorrow in our country.

“The result of this intervention is the landslide victory that led to the ascension of President Muhammadu Buhari and this administration.

We are gladdened that God has proven his words in diverse ways with the most outstanding being the defeat of Boko Haram within the first one year of this administration in office.

“It is obvious to all and sundry that the prophecy given to his servants and prophets have once again be proven right and God is never a liar. It is now obvious that peace has returned to the north east and people are now returning home to continue their normal life despite the attendant hardship and pains at the recollection of the bad things that happened in the past. We recognize this as another area where God is calling on his ministers to intervene in bringing succor to his children.

“We are gladdened that we live in a country that has backed our prayers up with action. We prayed for God to end the scourge of Boko Haram and our troops went to battle to decisively deal the dangerous group the blows that has reduced powers of the demons that had blighted the land with the blood of the innocent.

“Our belief is that everything in life is possible with hard work and prayer, we are therefore confident that the arrest or capture of Shekau is a matter of time and this shall manifest to the glory of God.

“We therefore declare today as the commencement of 40 Days National Prayer for the success of Nigerian Troops, return of the remaining Chibok girls and arrest of Shekau and other recalcitrant Boko Haram commanders.”