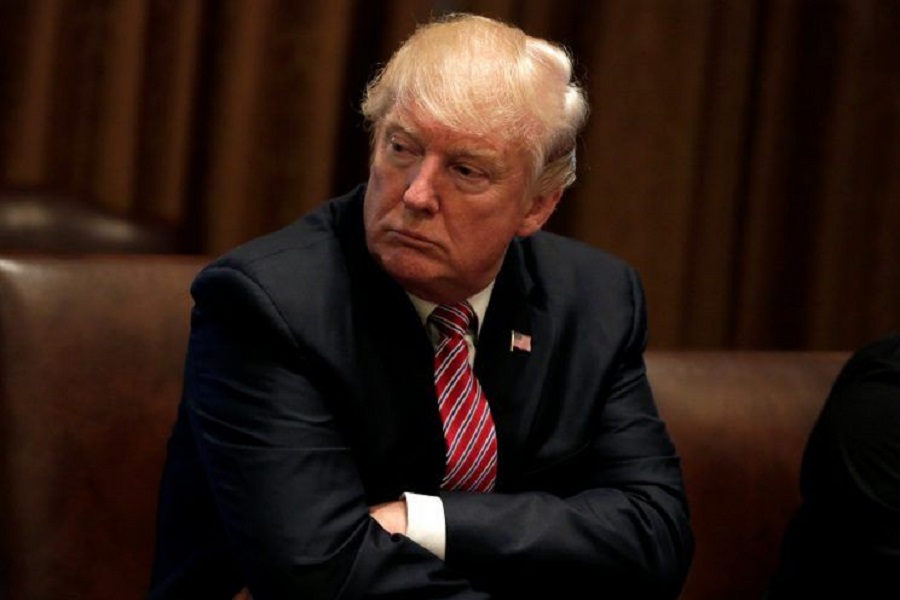 For months, House Minority Leader Nancy Pelosi and other Democratic leaders have privately counseled their more militant members to forswear talk of impeaching President Trump, telling them the political support for such a step simply doesn’t exist in the GOP-controlled Congress.

But 21 House Democrats, including the ranking member of the House Judiciary Committee, are now pushing an equally radical alternative: They are backing a bill that would create a congressional “oversight” commission that could declare the president incapacitated, leading to his removal from office under the 25th Amendment to the U.S. Constitution.

At 12:56 p.m. Thursday, barely four hours after Trump tweeted attacks against MSNBC cable host Mika Brzezinski in crude, personal terms, Rep. Jamie Raskin, D-Md., the chief sponsor of the bill, sent out an email to his colleagues, urging them to get behind the measure, writing it was of “enduring importance to the security of our nation.”

“In case of emergency, break glass,” Raskin told Yahoo News in an interview. “If you look at the record of things that have happened since January, it is truly a bizarre litany of events and outbursts.” Asked if Trump’s latest tweets attacking Brzezinski and her co-host Joe Scarborough — which were roundly condemned by members of both parties as beneath the dignity of his office — strengthened the grounds for invoking the 25th Amendment, Raskin replied: “I assume every human being is allowed one or two errant and seemingly deranged tweets. The question is whether you have a sustained pattern of behavior that indicates something is seriously wrong.” (Brzezinski and her Scarborough’s response to Trump’s tweets ran in today’s Washington Post under the headline, “The President is not well.” White House spokeswoman Sarah Huckabee Sanders defended Trump’s tweets Thursday, saying he “fights fire with fire.”)

To be sure, even Raskin acknowledges Congress and the country are in largely uncharted waters. The 25th Amendment was adopted in 1967 in response to the assassination of President John F. Kennedy and past presidential medical crises — including the heart attacks of Dwight Eisenhower and the illnesses of Franklin D. Roosevelt and Woodrow Wilson — to deal with instances where presidents become incapacitated and unable to perform the duties of their office.

One of its provisions, known as Section 4, empowers the vice president along with a majority of the Cabinet to make a determination that a president is “unable to discharge the powers and duties” of the office, and then provide it in writing to Congress, resulting in the president’s removal. It’s a step that has never been taken.

But Raskin, a former constitutional law professor, has seized on some largely overlooked language in Section 4 as the basis for his bill. It turns out it doesn’t only have to be the Cabinet that makes a finding of presidential incapacity. The section also permits “such other body as Congress may by law provide” — along with the vice president — to reach the same conclusion.

Yet in the 50 years since the 25th Amendment took effect, Congress has never set up such a body. Raskin’s bill would do so. It calls for the creation of an “Oversight Commission on Presidential Capacity.” The commission would be a nonpartisan panel appointed by congressional leaders composed of four physicians, four psychiatrists and three others — such as former presidents, vice presidents or other former senior U.S. government officials. The commission, if directed by Congress through a concurrent resolution, would be empowered to conduct an examination of the president “to determine whether the president is incapacitated, either mentally or physically.”

The 25th Amendment itself says nothing about the guidelines for making such a determination, much less what kinds of perceived mental illnesses would make a president unable to perform his duties. But Raskin, who first introduced his bill in April, said that he’s been getting increased interest in the legislation among colleagues, including Republicans who have privately approached him about it on the House floor. “I’ve had tons of inquiries and lots of colleagues have been talking to me about it,” he said. “I’m convinced most Americans believe we are living in a very strange reality. … The question is, what are the escape routes we have, and the 25th Amendment is one of them.”

Raskin’s bill so far has been quietly picking up support in the Democratic caucus. Among the co-sponsors who have signed are Rep. John Conyers, D-Mich., the ranking member of the House Judiciary Committee (and the only member of Congress who was around when the 25th Amendment was enacted), and Rep. Debbie Wasserman Schultz, D-Fla., the former chair of the Democratic National Committee.

But despite some talk of the 25th Amendment option in conservative circles — New York Times columnist Ross Douthat recently urged that it be considered and National Review contributing editor Andrew McCarthy tweeted about it Thursday — so far no Republican members of Congress have signed on to the idea. “It’s really a political decision,” said Rep. Steve Cohen, D-Tenn., who has also co-sponsored Raskin’s bill. While many of his GOP colleagues are, in the privacy of the House cloakroom, “shaking their heads” and “embarrassed” by the president, “they can’t say anything publicly” given the core support Trump has so far retained among their base, he said.

Indeed, in some respects, the political obstacles to executing the 25th Amendment are even greater than impeachment, notes Joel K. Goldstein, a professor of law at St. Louis University. Under its provisions, if a president challenged a finding of incapacity and demanded that he or she be reinstalled in office, it would require two-thirds of both chambers to block the commander in chief from doing so. (By contrast, it only takes a majority of the House to impeach a president, although two thirds of the Senate must vote to convict and remove the president.)

Moreover, as Goldstein notes, even if Congress were to create the body called for in Raskin’s bill, it couldn’t act to declare the president incapacitated without the concurrence of the vice president. That means Vice President Mike Pence could effectively block any move to invoke the 25th Amendment option. “The vice president is a necessary party. He effectively has a veto,” said Goldstein. “He’s a deal breaker.”

Still, Raskin is undeterred. “The question is, where are we going to be six months, 12 months, 18 months from now? The presidency is considered extremely stressful for people with the strongest mental health. We need to be prepared for all eventualities.”