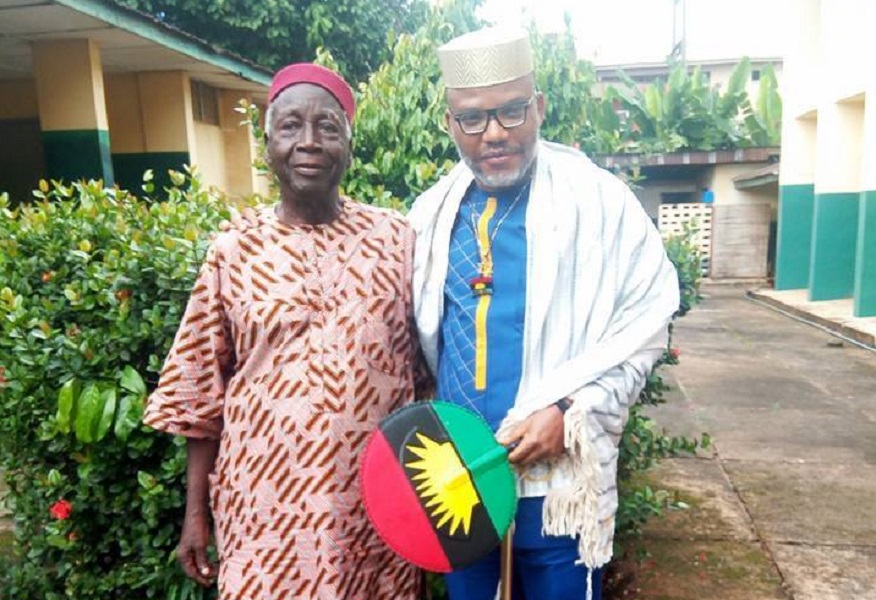 I was privileged to witness the IPOB reconciliation meeting that took place at the Conference Room of Ikedife hospital, Nnewi, operated by Dr. Dozie Ikedife Snr, Deputy Leader of IPOB Customary Government and IPOB Council of Elders.

It will be recalled that soon after the formation of IPOB by its proponents, there arose an ideological disagreement among the hierarchy over methods. Justice Eze Ozobu, Dozie Ikedife, Col. Achuzie and some others believed in legal and constitutional process while Nnamdi Kanu and some others preferred an outright revolutionary approach that would bypass legal bottlenecks. Ikedife and his side also wanted political participation and Nnamdi Kanu and his group do not believe in political participation, seeing it as contamination and poisoned chalice.

The disagreement soon degenerated and factions broke out and fought each other openly in the battle for supremacy. Nnamdi Kanu fought with the media, especially with the powerful Radio Biafra of which he still the Director and with which he brought the Biafra struggle to its current apogee. Ikedife and Kanu who had been like father and son fell out almost irreconcilably before Nnamdi Kanu was arrested by the DSS and the commencement of his trial and long sojourn in Kuje Prison.

While Nnamdi Kanu was in prison, the Ikedife faction of IPOB did not take any advantage of that but instead, sent a delegation that visited him in prison after which they also made a demand on the Federal Government that Nnamdi Kanu be released to them (the IPOB Council of Elders). Though not primarily intended, it was a first step towards rapprochement between the two IPOB warring factions.

I had believed that unless the IPOB family came together, the Biafra struggle would remain fractured and uncoordinated. Unknown to many too, the issue is not power struggle as such. It is more of ideology and methods, and each side of the divide has valid points. Thus, my conviction had been that the two factions can still work together if a balance could be struck. At my first visit to Nnamdi Kanu early May, I had to broach the delicate matter and he assured me that he would do all that was necessary to bring the IPOB family back together. He told me he was already planning to meet with Dr. Dozie Ikedife to set the process rolling, as a follow-up to the visit he paid to the Ala-Igbo Development Foundation lead by Prof. Uzodinma Nwala in Enugu where he first met Ikedife since their squabble began.

Within the period, I spent a lot of time in Awka with the leaders of the Customary Government of IPOB and MOBIN (the two or more structures that were formed by the Dozie Ikedife group to give vent and effect to their beliefs on the ideology and methods for the actualization of Biafra. Ikedife and his group also set up Bilie, a human rights arm with which they instituted a case on the legality of their struggle against the Federal Government at Owerri Federal High court.

The officials were happy with my interest in helping to bring about peace and unity in the Biafra struggle generally, and the IPOB family in particular, and took me to Dozie Ikedife who welcomed me with open arms. At that pre-reconciliation meeting, Dr. Ikedife was visibly sober on hearing that my name is Law Mefor. He told me my brother Uche Mefor, Nnamdi Kanu’s deputy, had called him unprintable names in Radio Biafra and incited violence against him. Afraid of inheriting my brother’s enemies and in pursuit of peace, which brought me; I apologized on Uche Mefor’s behalf and pleaded with him to treat it magnanimously as a great father he is. He agreed and offered me kola and drinks and said the grace for peace and unity over the kola. I stated my mission. Fair enough, his precondition for peace was simple: unreserved apology from Nnamdi Kanu for the vilification he suffered during the period of disagreement.

On the reconciliation day, I rode with top officials of the Customary Government, Biafra TV online and Mobin to Nnewi to await Nnamdi Kanu’s arrival at the venue. Nnamdi Kanu and his team arrived in the afternoon and came straight upstairs to the Conference room; unguided, showing he was on a familiar terrain. A good number of pressmen, both print and electronic were around and fully covered the reconciliation meeting.

Nnamdi Kanu first spoke after the traditional breaking of kola nuts, and made it clear that Ikedife is more than a father to him and remains so. He blamed the disagreement between them on miscommunications and pleaded that the disagreement remains where it belongs: in the past. Ikedife responded and, like a great father, he made light of the disagreement and without conditions, took Nnamdi Kanu back as a worthy partner in the Biafra struggle. It was a very emotional meeting and reminded me of the biblical return of the prodigal son.

Remarkably,  Ikedife said he had always told Biafrans everywhere within and outside Nigeria to operate within the countries’ laws. He told Nnamdi Kanu that the setting up of the Customary Government of IPOB was constitutional and even operational in other parts of Nigeria, especially in the north using their sharia law.

Then, the Director General of the Movement of Biafrans in Nigeria (MOBIN) Rita Eberechukwu Anigbogu spoke. She spoke about the branch of IPOB she heads and assured Nnamdi Kanu, who she said recruited her into the struggle; she would remain loyal till the end.

Chinedu Asuzu who is the Director of Biafra Voice Intl (TV) Channel 1, spoke in the same vein too.  Then yours sincerely was also given a speaking chance as the witness-in-chief. I happily told them I was a witness to history of an answered prayer and urged then to sustain the peace and unity initiative being consummated. I assured them of continued support of the Igbo elite as long as the Biafra struggle remained forthright, focused and altruistic. I rounded off by stating that their struggle was justified as Igbos are actually being mistreated in Nigeria. And on independent Biafra or restructured Nigeria, I gave a measured answer: truly and fully restructured Nigeria is good but Biafra is better, and that which shall be would ultimately depend on the Nigerian Government.

One or two others spoke after me and the one hour-plus session ended, with Ikedife and Nnamdi Kanu alone going into a closed session, which lasted for about 30 minutes. Then, the Customary Government, Mobin and Biafra TV online officials went also into another closed session with Nnamdi Kanu, and permitted yours sincerely to witness it also. There, they agreed  on their return visit to Kanu at a later date and the need for a Biafra Council, which Kanu proposed would serve as a clearing house while all the existing structures are allowed to continue as they are and subject to the Biafra Council.

Half way into the meetings, a motley crowd in their thousands had gathered outside round the fence and adjourning road, blocking it completely. Since Ikedife made the visit a private one, how the crowd gathered was surprising. Nnamdi Kanu and the rest of us went round for him to acknowledge the overwhelming solidarity. Before he left, he also obliged some women who came with their babies for him to touch and bless and take pictures. He also addressed the press, where the question of Anambra Election came up after he had stated that there would be boycott of elections in 2019 and he said it would start with Anambra Election.

I had the opportunity to address some media men also who wanted my take on the Anambra election boycott. I simply told them it was not feasible since the 1999 constitution did not provide for an irreducible minimum participation, which meant only the Governor and his staff are enough to reelect him. I told the media I did not see the strategy in leaving a party that would continue after one had left it, and I insisted that it would be much better for IPOB to support a candidate who has very strong sympathy for the Biafra struggle or better still, one of their own.

Shortly after Nnamdi Kanu and his team left, we returned to Awka, ending one of my happiest days.

Law Mefor, a Social Psychologist, Journalist and Author, is a member of Nzuko Umunna.