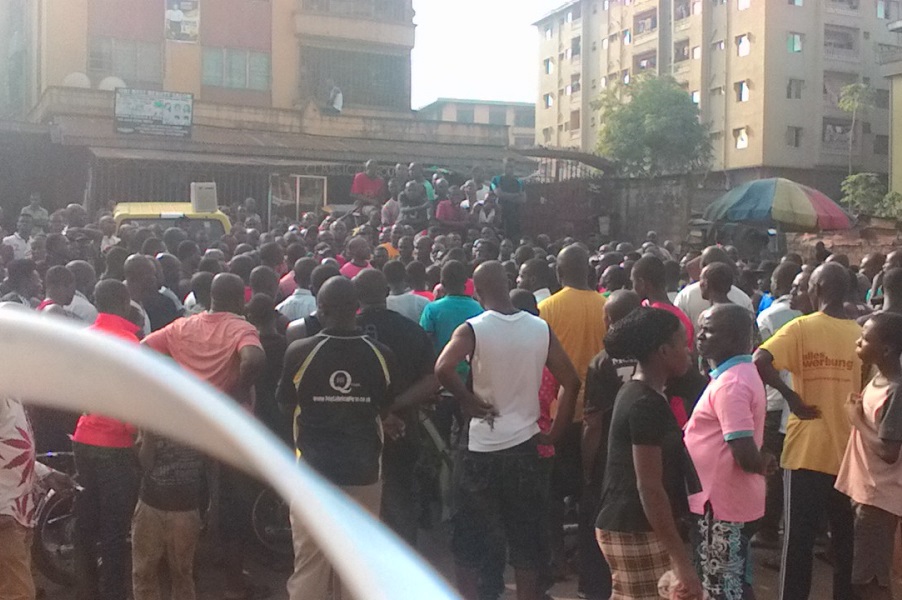 Following the disconnection of electricity in the entire buildings in Ugwuagba Layout-Obosi, Idemili North Local Government Area of Anambra state for close to two months now, the residents of the layout at the weekend held a public protest within the layout where demonstrated their anger by sealing off the office of Enugu Electricity Distribution Company, EEDC situated at No 3 Obodoukwu Street,Ugwuagba Layout Obosi.

Apart from sealing off the office of the company in the layout, the company allegedly controlled by fraudsters, the community vehemently stated categorically that there will be no more paying of electricity bill(s) in the layout till they are provided with prepaid meters by EEDC, calling on Anambra state government via that State House of Assembly to wade and  their feud with Enugu Electricity Distribution Company, EEDC.

The protest which was peaceful according to an eyewitness account was organized by the electricity committee of the layout as the consumers of the commodity accused the staff of the  Enugu Electricity Distribution Company, EEDC in Ogidi  zone of arbitrarily and outrageous estimated bills, adding that despite having made their predicament known to the authorities of EEDC, the company have continued to use consumption estimates to compute their bills instead of providing them with prepaid meters.

Sealing the office of the Enugu Electricity Distribution Company, EEDC with different placards with inscriptions like; Enough is Enough EEDC, We won’t pay again because there is no light,  No payment, EEDC, They are Oppressors, EEDC is 419 Agents, You are corrupt, 419 and Robbers amongst others, the residents however vowed to take the laws at their hands should any staff of EEDC should take the risk of either opening their office or coming to disconnect any wire(s) within Ugwuagba Layout.

It would be recalled that a similar protest in the same layout was held in the previous week and after the protest, the staff of EEDC on their own deserted their office for fear of being attacked by the angry protesters who took to the streets of the layout, chanting angry songs with placards with different inscriptions.

The weekend protest, it was gathered attracted who is who in the layout as the residents vehemently, under one accord said they have resolved not to pay any electricity bill till the EEDC provide them with prepaid meters.

Addressing the residents of the layout on the need to be law-abiding in the pursuit of the prepaid meters, the Chairman, Ugwuagba Layout Electricity Committee, Hon. Ezenna Marcel openly accused the Business Manager in charge of the layout of having flouted their heart-to-hearth agreement, stating unequivocally that the alleged high-handedness of the Business Manager of EEDC has brought a bridge between them and the company in charge the commodity.

Hon. Ezenna said; “We have made representations through various petitions to different quarters including to the office of the Managing Director/Chief Executive Officer, Enugu Electricity Distribution Committee, EEDC, Mr. Robert Dickerman, Non- Governmental Organizations like Rural Electricity Development Initiatives but our cries through those means meant nothing to the staff of EEDC as what they are after is to defraud all of us but now, we have decided to boycott using electricity till when EEDC will provide us with prepaid meters”, he said.

Contributing on behalf of the entire women in the layout, Lolo Patience Nwaemesie who decried the disconnection of the community by the staff of the EEDC, regretted that despite buying of 18 out of the 20 transformers in the layout by the residents, maintaining and even fallen to the alleged antics of the staff of the EEDC just for peace to regain; “the criminally minded staff of EEDC have the veracity to disconnect our light, we are out to march actions with words this time around.

“We have applied for prepaid meters for donkey years now but knowing that they will not defraud us if they install prepaid meters in our community, they agreed to place us on estimated bills of N3, 000 per flat in a month, they twisted it and came up with another method of tasking each flat at Ugwuagba to pay N7, 000.00 per month”, Lolo Nwemesie lamented.

Blaming the state government for having failed to provide Solar energy for communities in Anambra State, which according to Lolo Patience Nwemesie could have served as an alternative to EEDC, the woman went further and alleged that apart from maintaining the property of the Enugu Electricity Distribution Company, EEDC and still pay the exorbitant estimated bills; “the staff of the company at Ugwuagba will not repair or even fix fuss in any transformation without extorting N7, 000. 00 and above from us”, even as she called for the immediate sack of all the staff of the EEDC in the area.

In a similar contribution, one of the landlords, Chief Promise Orakwue condemned the actions of the EEDC against the Ugwuagba community, tracing their woes to the period when Power Holding Company of Nigeria, PHCN was in charge of public power supply.

Chief Orakwue however charged the residents to be vigilant and be ready to pay any sacrifice in making sure that EEDC will install prepaid meters in the community, threatening that they are ready to lynch any of the staff of the EEDC that may risk his or her life in coming to perform any duty in the name of Enugu Electricity Distribution Company, EEDC within Ugwuagba community until their demands are met.

Reacting when contacted through his GSM Line, Public Relations Officer, PRO Enugu Electricity Distribution Company in Onitsha zonal office,Mr. Lazarus Onyearugbulam dusted the allegations coming from the residents of Ugwuagba community, affirming that the community have beenon the top list debtors of their company, noting that no amount of threats could deter them from recovering the amount allegedly owned by the Ugwuagba community.