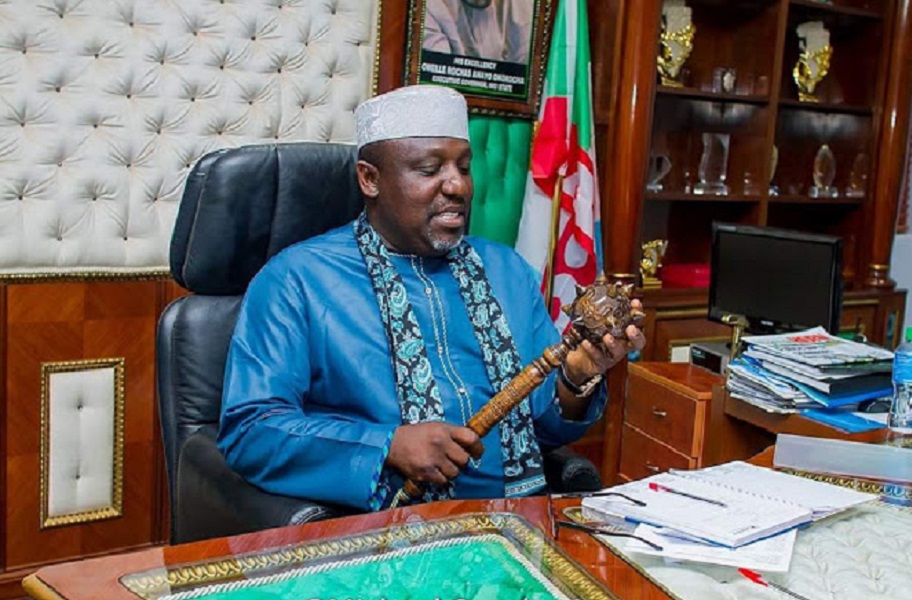 While his spin doctors and fellow PDP chieftains may choose to continue to feed the people with crates of lies about the ruling of the court on the cases he has severally brought against the State Government, it is important to tell the people the truth of the matter. The main bone of contention in some of the recent rulings by the courts which the men in his camp have continued to trumpet as being an order requesting the State Government to restore him as both a traditional ruler in Obinugwu Autonomous Community and as Chairman of the Imo State Traditional Rulers Council is that unambiguous instruction by the court that ‘Status quo’ should be maintained. The question here is what is the meaning of ‘staus quo’? The Meriam Webster English Dictionary simply defines status quo as; ‘the existing state of things’. In order words, status quo can mean the present situation of things, the current situation or the prevailing state of things. In the case of Mr. Cletus Ilomuanya, the present state of things as regards the issues he went to court over is that he has been legally dethroned as a traditional ruler in Imo State, and had earlier been removed as the Chairman of the Traditional Rulers’ Council. Assuming his earlier removal was not upheld by the courts, Ilomuanya’s tenure by the dictates of the Constitution of the Association he claims to be heading, had expired since 2015. Therefore, the court’s decision may be interpreted to mean that Ilomuanya remains a Mr. since it is the current situation of things in Imo State. Ilomuanya would have had a case, had he got the court to order for a reversal of status quo, but the incorruptible justices judiciously ordered that status quo should be MAINTAINED. This is not confusing to anyone who is interested in the truth, as it makes it clear that the court has upheld the decision of the Imo State Government to sanitize the traditional institution by dethroning an individual whom its investigations show as not being worthy to act or be addressed as a traditional ruler in any sane society.

For the avoidance of doubt, Mr. Ilomuanya literally bought the title of ‘His Royal Majesty’ in the first place and there is little to show that he really understands what it really means to be a royal father, as he had, throughout the period of his reign as a traditional ruler, being more visible as a political patron, sponsor or even as a chieftain of a political Party than a royal father. How do you explain a situation where majority of those speaking out on his behalf are politicians from outside Obinugwu, while a majority of Obinugwu people have moved on with their lives and businesses as if the dethronement of Mr. Ilomuanya never really happened, or that it is something they had always wanted. A royal father is supposed to be the father of all, politically neutral, supportive of government’s positive programs and actions, close to his people, chief security officer of his community and a custodian of the peoples’ traditions and customs. Most importantly, a royal father must be a man without any dent on his image and whose rule must not be shrouded in any form of controversy. There is none even among Mr. Cletus Ilomuanya’s closest allies and defendants who can rightly claim that he met any of these criteria before he was given the staff of office to become the traditional ruler of the newly created autonomous community, Obinugwu.

For some of us who followed events closely during the past administration, we took notice of how the deposed traditional ruler carried about like he was running a government different from that of the State Government and how he allegedly became a clearing house for PDP aspirants and top-brass in the State, to the point that he was alleged to have threatened to punish any traditional ruler who identified with or even as much as welcomed any opposition politician to their domains. As controversial as his tenure as the Chairman of the Traditional Rulers’ Council was, HRM Eze Cletus Ilomuanya (as he then was) wielded so much powers and was accused by some of his fellow traditional rulers of using crude force to intimidate those who questioned his highhandedness.

Mr. Cletus Ilomuanya’s insistence on remaining the Chairman of the Traditional Rulers’ Council, two clear years after his Constitutionally allowed tenure had elapsed and more than one year after a government panel found him unworthy to remain a traditional ruler is purely an attempt to cast the Igbo traditional institution in a very bad light as he projects this revered institution, as an institution that is reserved for those who are desperate to hold on to power, even when they have been rejected by a majority of those they are supposed to rule over. This is even as the former traditional ruler was accused by his colleagues of ‘manipulating’ the Constitution of the Imo Traditional Rulers’ Council in order to perpetuate himself as the Chairman of the body. The Southeast Traditional Rulers’ Council, which he claimed to have led, is dismissed by some stakeholders in the Southeast as fake and non-representative of the class of individuals who are qualified to be addressed as traditional rulers in Igboland. Some have even gone ahead to classify the group as an irrelevant and illegal for-profit association of select chiefs. This is given credence by the fact that throughout the existence of this association under the leadership of Mr. Ilomuanya, they were unable to attract the membership of any first class traditional ruler in the entire Southeast.

It will not be out of place to project that Mr. Ilomuanya is desperately pushing to return as a traditional ruler and chairman of the Imo State Council of Traditional Rulers because of the glamour that the Okorocha administration has brought to the institution. As much as Mr. Ilomuanaya would want us to believe that he put in some years into serving Imo State as a traditional ruler, it will not be out of place to ask him and his media aides and sympathizers to point to any landmark achievement he recorded throughout his tenure as the Chairman of the traditional rulers’ council.

Under HRM Eze Agunwa Samuel Ohiri as the Chairman of the Imo State Traditional Rulers’ Council, Imo State traditional rulers can now boast of owning the best Traditional Rulers’ secretariat in the entire Southeast and obviously one of the best secretariats in the entire Nigeria. A trip to the former Mbari Cultural Center will convince you that the Imo State governor has taken commendable steps in giving the traditional institution a pride of place. Also, traditional rulers under governor Okorocha have ceased being mere houseboys to the government in power, as their welfare is given paramount attention, while they have been integrated into the mainstream of governance as the present government ensures that every traditional ruler in the State is responsible for the security of his community. In the government’s State Development Council (SDC) and Community Government Council (CGC), influential roles are played by the traditional rulers, as they are made part of the State decision-making process, especially in the areas of development of their communities, security and employment matters.

Some emergency critics and activists have expressed displeasure with Governor Okorocha’s threat to banish Mr. Ilomuanya if he continues to cause problems in the State. The same people who quarrel with Okorocha’s statement are the same people who would claim to be arguing for the reinstatement of our traditional values. They forget that the true Igbo traditional values recommend that those individuals who continually bring scorn on a society may be banished from the community. The question here will likely be, if Okorocha is a traditional king that he would want to banish anyone.  The answer is: as a governor, Okorocha is the Chief Executive of the State, meaning that he is the Chief priest, Traditional head, political head, and the overall head of Imo State.

At the time Governor Okorocha’s government began the move to sanitize the Igbo traditional institution, starting from Imo State, some of us did not quite understand him, but today, it has become obvious to even the most skeptical but non-partisan analyst that the Okorocha administration has done well in repositioning the Igbo traditional institution and making it one of the most respected traditional institutions in the country. Days are gone when the Chairman of the Traditional Rulers’ Council would be seen everywhere directing the affairs of the ruling political Party or positioned as a ballot manipulator for the ruling Party. Today, the Chairman of the Imo State Traditional Rulers’ Council, Eze Samuel Agunwa Ohiri is accorded much respect and independence which other tribes in the country, especially, the Yorubas and Hausas accord their traditional rulers which make us admire them.

The tragedy in being desperate for power and relevance is that it robs us of the chance to think clearly and think ahead. Mr. Ilomuanya has undoubtedly spent a better part of the last six years going from one court to the other to seek reprieves that are more selfish than they are beneficial to any number of the ordinary people in Obinugwu or in Imo State. There is no worst tragedy than when a man directs all his energy and resources to fighting for something he does not have the power to give to himself. Those who love Ilomuanya would tell him to move on with his life, as there could be better things ahead than just being a traditional ruler of one of the smallest communities in the State. After all, Ilomuanya’s father was not a king, neither was he born a Prince. Being a traditional ruler is one of the things he was able to gain by working hard, and if he works so hard, he might even become President. It would have been understandable if Ilomuanya was fighting this cause in order to preserve a family history or dynasty, but he is merely fighting an ego battle which will be too hard to win.