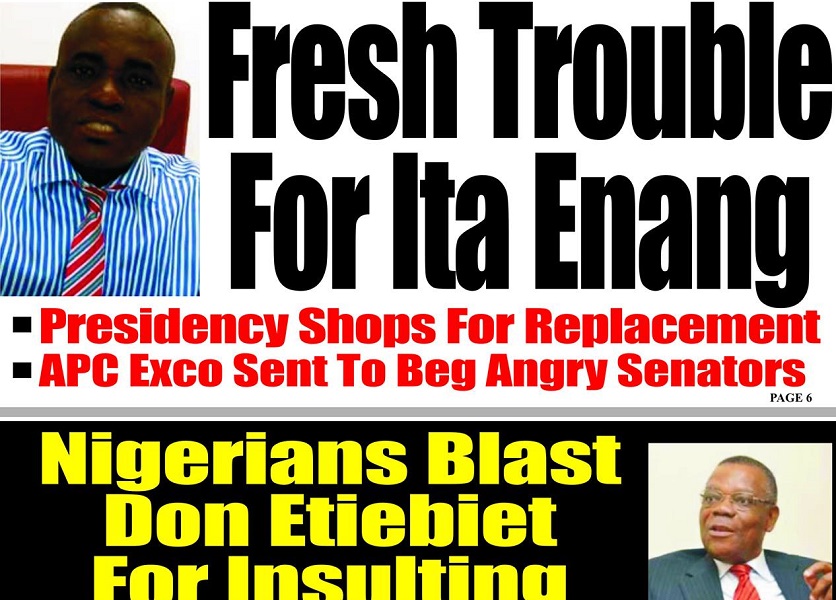 President Muhammadu Buhari may have concluded arrangements for the replacement of his senior Special Assistant on National Assembly (Senate) Matters, Sen. Ita Enang in order to save his Government from imminent collapse.

It is no longer news that there is an unending animosity between the Presidency and the Senate of the Federal Republic, the news is that the president’s liaison officer to the senate, Ita Enang has been found wanting by the cabal in Aso Rock who are considering his replacement.

According to an impeccable source in the presidency, this is a result of the persistent strenuous tie between the executive and the legislative arm culminating in an unending brawl between the two.

It was gathered that the Presidency is currently shopping for a replacement for its senior legislative liaison officer who is seen as being unable to discharge his duties creditably, thereby making a mockery of President Buhari.
As a remedial measure, the Vice President has been mandated to bank on his brilliant communication skills, to repair the bond between the APC controlled federal executive and legislative arms of government, while Ita has been clearly overlooked.

Despite having over 16 uninterrupted sojourn in both the upper and lower chambers of the national assembly, the Ibiono Ibom-born Akwa Ibom son has failed to build on his experience to create a relationship with his former colleagues, and this has seen the failure of policy implementation in several moves by the president.
Recently, all the efforts by the President to have Ibrahim Magu cleared for his role as chairman of Economic and Financial Crimes Commission, amounted to nullity, as the senate kept rejecting and ridiculing the nominee.
Enang’s duties covers the smooth transmission of the president’s messages to the senate, lobbying of national lawmakers and ensuring that presidential nominees sail through in the red chambers of the senate during screening.

A source in Aso Rock revealed that recent trouble started for the presidential aide when he issued a press release disowning the letter re-nominating Ibrahim Magu for a second time for the top job in EFCC. 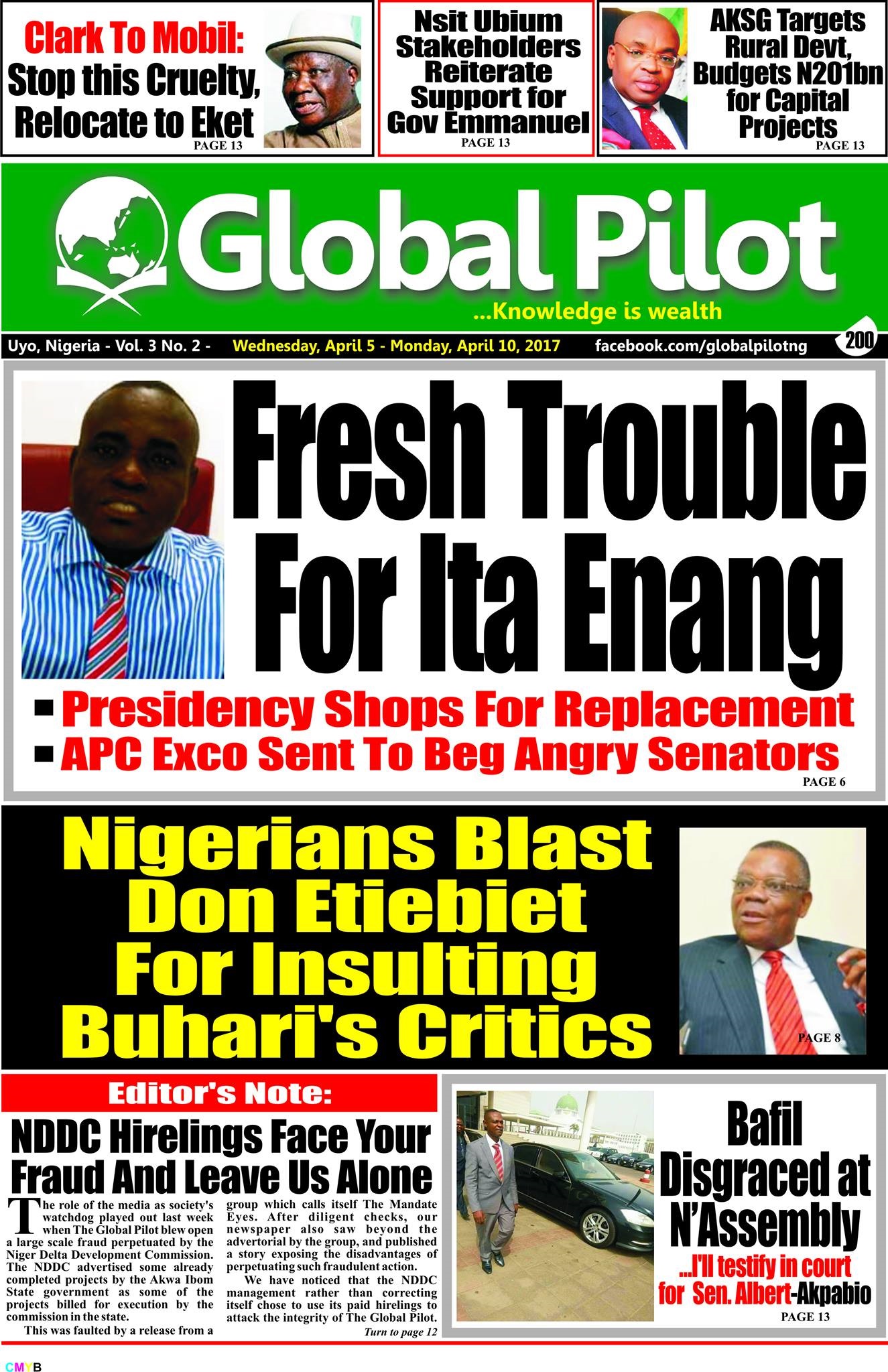 The source told our reporter that the cabal in Aso Rock was very angry that Senator Ita Enang was trying to prove to the world that it was not President Buhari who issued the letter before embarking on a trip to London on a medical vacation.
“That press release was Ita’s greatest undoing as a presidential aide. Under the Buhari’s administration, it is not bad to know the truth but a very big crime to reveal the truth to the public which was what Ita Enang did when he announced that the letter was not from his office.”

“It was a clear case of a presidential aide working at cross purposes with the presidency” the source hinted. Senator Ita Enang has continued to perform below expectation considering the hard stance of the senate on some presidential decisions in the last couple of days.
Another example is his failure to convince the senate leadership to ensure the screening of the 27 resident electoral commissioners nominated by Mr. President, something that has never happened since the return of democracy in 1999.

The refusal of Senate to screen the nominees is a testimony that Senator Ita Enang was not doing his job well and may soon be replaced with a man who understands the politics and intrigues that play out in the senate and the presidency.

It could be recalled that immediately Sen. Ita Enang was appointed, he was accused of both budget padding and stealing by members of the National Assembly and such embarrassing display did not go down well with the President who at that time moved to replace Enang.

It was the swift intervention and magnanimity of Sen. Godswill Akpabio, that saved the day for Enang, as Akpabio was said to have argued that instead of replacing an Akwa Ibom State son with someone else, Sen. Ita Enang should be allowed to continue.

Since then, series of problems ensued at the Senate, such as Enang’s confrontation of the senate leadership with allegations of forging of senate standing rules, impeachment attempt on the Senate president , rejection and delay in screening of nominees.

Barely some weeks after the rejection of Alhaji Ibrahim Magu as the chairman of the EFCC, the senate also rejected the nomination of 27 Resident Electoral Commissioners (REC) of the INEC, nominated by President Muhammadu Buhari which included 19 freshly nominated RECs and 8 reappointed others.
Immediately the motion was moved for the confirmation of the nominees that Tuesday, the Senators took their turn to blast what they described as “affront” on the part of the executive.
The lawmakers were specially angered that, the EFCC boss, Magu, was still being allowed by the President to act as Chairman of the anti-graft agency, even when the senate had long rejected him.

With the refusal of Ibrahim Magu to quit his position as acting chairman of the anti-graft agency, the Senate last week turned down the screening of the 27 nominated resident Electoral commissioners from the Presidency.
In all of this turbulent situation, Sen. Ita Enang, the president’s aide on National assembly matters, appears to be helpless and wanting in his primary area of assignment, prompting the President to put up his thinking cap on possible replacements of his wanting aide.
Pundits believe Ita Enang’s survival will depend to a large extent on the support of the former governor of his home state but if he allows party difference to come in between them, he will soon fall a victim of the power play in Aso Rock.