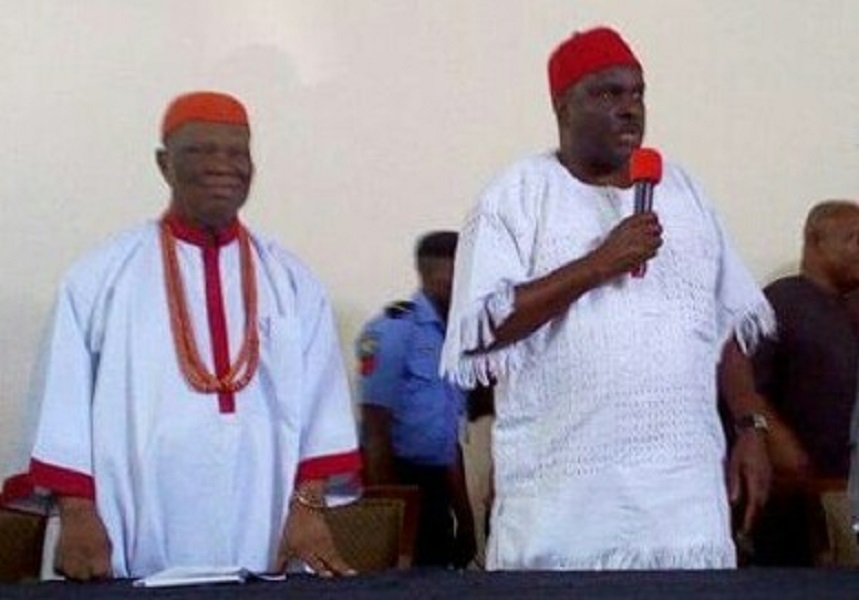 If the feelers reaching The Nigerian Voice is anything to hold onto, Mr Ifeanyi Okowa, Delta State governor’s kinsmen, may have turned their back on their son’s return to government house come 2019.

Impeccable information reaching our news desk had it that on Friday a delegation of Anioma who were on a solidarity visit to ex-convict former governor of the state, Mr. James Onanefe Ibori at Oghara, pleaded with the former governor to use his political contacts in assisting them to realise their long dream of having the much talked about Anioma state.

It was gathered that the Anioma delegation informed Ibori of their desire to have the Anioma State rather than the recent endorsement of their son for a second term.

The Anioma delegation under the umbrella of Izu-Anioma, led by Okowa’s monarch, the Obi of Owa, His Royal Majesty (HRM), Emmanuel Efeizemor II, after appreciating former governor Ibori for all the support to their son, the monarch quickly added that their most current pressing need now was nothing more than the creation of Anioma state.

The monarch appealed to Ibori to as a matter of importance throw his political weights behind them and use his contacts to push for the creation of Anioma State from the present Delta State, rather than the endorsement of the incumbent governor for a second term, adding that the district has all it takes to have their own state.

In a speech presented on behalf of the delegation by a former Federal Permanent Secretary, Mr. Emmanuel Okafor told Ibori that the Anioma people were not interested in the governorship position, saying all they wanted at this point was to see their own state created from the present Delta State.

The speech which created a mild commotion as well as murmuring between state information commissioner, Mr. Patrick Ukah and some loyalists of Okowa forced the team leader, HRM Efeizemor, to plead for calm as most of the delegates were already itching for a walk out.

Still stunned by the speech, the Information Commissioner who was also in the entourage and the Special Adviser to Okowa and former state chairman of the Peoples Democratic Party (PDP), Mr. Edwin Uzoh, walked out of the meeting with long faces and as that was not enough, Mr. Ukah went extra miles, allegedly seizing the video clip of the camera man filming the meeting.

247ureports.com reliably learnt that Ukah truncated all attempts for journalists to get a copy of the speech who insisted that the content of the speech was not part of their agenda for the visit to Ibori’s house.

In his remark, the ex-convict former governor Ibori, commended the delegation for the visit and said their request was far beyond what he can handle, adding that when the time comes their plights shall be looked into.

It would be recall that Ibori had at a reception in his honour at Oghara endorsed Governor Okowa for second term come 2019.

Speaking to our correspondent at Ibori’s country home, Oghara, the camera operator identified as Mitchell, accused Ukah of intimidation and threats to destroy his video camera and went ahead to seize his tape under duress.

It was learnt that Ukah, denied seizing any tape from Mr. Mitchell even as the commissioner was alleged to have released some huge amount of money to some Journalists who were not present during the visit to write favourable stories from the visit.

Our correspondent learnt that, the newly appointed Aide on Social Media to Okowa, a blackmailer and dirty jobber, Mr. Fred Latimore Oghenesivbe has been reaching out to Journalists who were present during the visit so as to compromise them to kill the story.