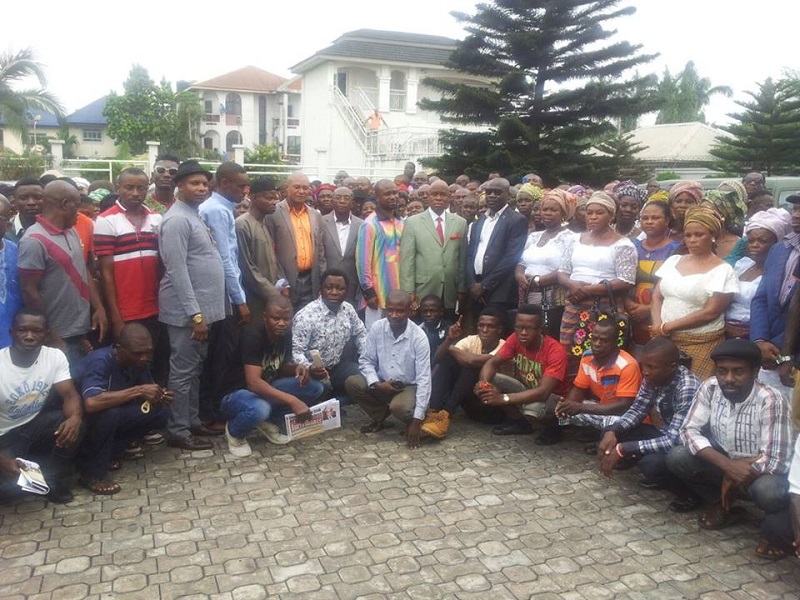 Advertisement
By Iheanyi Ezinwo:
More former members of the All Progressive Congress, APC, from Ahoada- East, Abua/Odual and ward 12  in Emohua local government area of Rivers State have formally decamped to the Peoples Democratic Party,PDP.
The decampees numbering over 1500  were received by the former commissioner for transport, Chief Emeh Glory Emeh in Port Harcourt on Monday.
Speaking on the occasion, Clement Chidi Olimini, leader of the  decampees from Ahoada-  East; Ebiten Abinami, leader of the Abua/Odual group, Peter Ogbo Obanson on behalf of  defectors from Emohua ward 12,  said that they are moving over because of the leadership qualities of Governor Ezenwo Nyesom Wike, and the lack of direction on the part of APC leadership in the state.
They commended Governor Wike for the amnesty granted to people from the Orashi region, pledging the support of the decampeess to the government of Governor Wike and the PDP.
Receiving the decampees, Chief Emeh Glory Emeh, who was  also Chief of Staff, Rivers State Government House  thanked them for their bold decision, promising that Governor Wike will not disappoint them.
Chief Emeh said that thee governor runs an all inclusive administration, assuring that  the defectors will not regret coming over to PDP.
Chief Emeh said that a day will be set aside when all the decampees will be formally received by PDP leadership in the state.
It will be recalled that, it has  been avalanche of defections in the past couple of weeks involving  APC members from Emohua, Degema, Asari-Toru, Akuku-Toru, Ogba/Egbema/Ndoni, Eleme, Ahoada West, Port Harcourt, Obio/Akpor and non indigenes who have moved in droves to PDP.
In each of the local government areas, the decampees  had  attributed  their change of party to poor leadership and lack of direction in APC, describing the party  in the state as dead and buried.