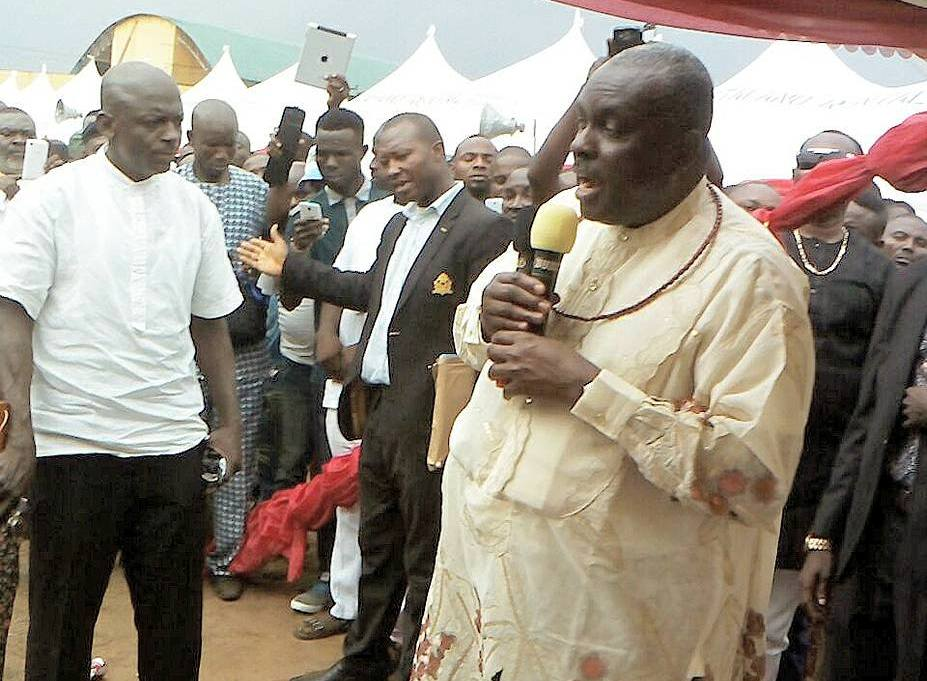 As 2019 general elections gathers momentum, former governor of Delta State and cousin brother to the immediate past governor of the state, Chief James Onanefe Ibori has sent strong warning signals to those aspiring to wrestle power from the incumbent governor, Senator (Dr) Ifeanyi Arthur Okowa to stay off while declaring that there is no vacancy in government house.

Ibori made the stern announcement at the Permanent Site of Western Delta University Oghara, Ethiope West local government council at the weekend during the Delta Central Welcome rally in his honour that the seating governor would remain in government house come 2019 to complete the eight years (two terms) tenure of Delta North entered in a gentleman agreement.

Chief Ibori who was swinging in bold smiles in appreciation of the honour accorded him by the good people of Delta central, further asserted that the quality results of consolidated politics would be visible for all Deltans to see in 2019, urging members of the Peoples Democratic Party (PDP) and supporters to rekindle their enthusiasm, hope and to ignore cheap blackmail and empty political propaganda embarked upon by some frustrated political mediocre currently parading themselves as the new messiah of the people.

The event was well attended as Chief Organiser and leader of PDP Delta Central, Senator Ighoyota Amori, Barrister Kingsley Esiso and his team worked tirelessly to ensure that Chief Ibori got the best of red carpet reception which took place at the permanent site of Western Delta University, Oghara in Delta State.

Various speakers commended Ibori and declared him once again as the political leader of the Urhobo nation. They were unanimous that Ibori’s persecution, incarceration and long absence caused the Urhobos a big loss in the political equation of the country and enjoined him to reflect on his crusade and return the Urhobo nation to her rightful political position.

Speaker after speaker commended Ibori for his developmental strides, result oriented and proactive leadership qualities, pointing out that Ibori’s incarceration was connected to his fight for ‘resource control’ in Nigeria.

In his response, Ibori thanked all PDP faithful for standing by him and above all, for believing in him as their political leader since 1998 till date.

He commended the Urhobo nation for their prayers for him and the avalanche of solidarity visits they extended to him since he came back from his travails in the United Kingdom which was a sacrifice he had to make as a leader.

Ibori was full of gratitude to the PDP family, the traditional rulers of Urhobo extraction and indeed the entire Urhobo nation, Deltans and Nigerians in general.

Reacting to Ibori’s declaration, the 2015 governorship candidate of the All Progressives Congress (APC) and leader of the party in the state, Olorogun O’tega Emerhor said such endorsement did not come as a surprise to him.

Emerhor who spoke through his media aide, Aghogho Abraham Orotomah, said, “Chief Ibori he said, is the alter ego and defacto principal of PDP in Delta State and is not unexpected for him to promote as always, the interest of PDP and Governor Okowa.

According to him, “This, however, puts a lie to the deception and misinformation being peddled in certain quarters that Ibori harbours any sympathy for APC either in Delta State or at the Federal level. We in APC Delta State have anticipated this endorsement long ago and are quite prepared to meet him, Okowa and the PDP at the 2019 elections to finally determine which party now owns Delta State political landscape”, Emerhor concluded.