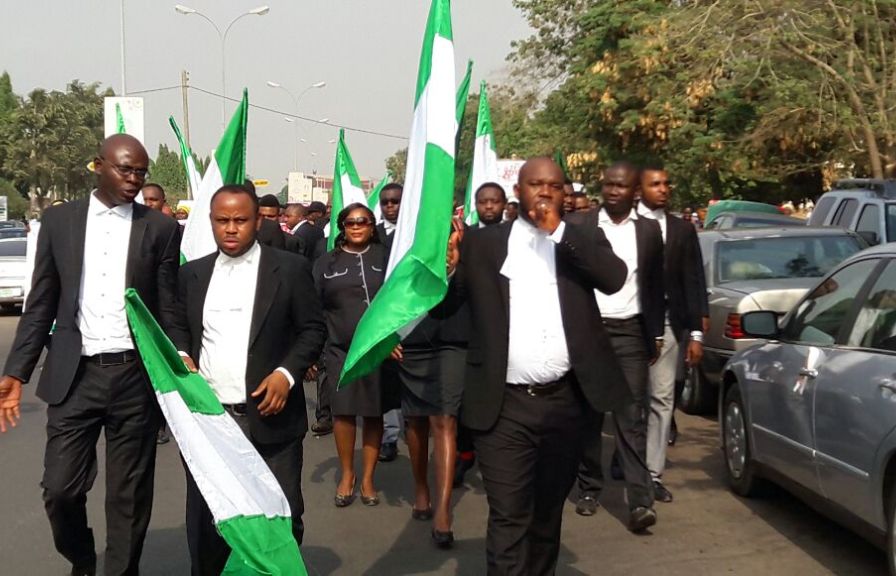 ….As lawyers raises alarm over plot to overthrow Nigeria Democracy

Wants DSS to free four activist( Comrade Ugo Apumaga, Ikenga Imo Ugochinyere,Emeka dibia,Ejike etc been illegally detained in their undergound cell.
Thousands of protesting lawyers, civil society group led by their coordinator Barr.Agu Okwukwe are currently marching on the Streets of Abuja against the growing excesses of the DG SSS, the gradual destruction of Nigerian Democracy, abuse of human rights/institutions of governance, detention of citizens/journalists and the shameful attempts to destabilise Rivers State by the DSS/POLICE .The lawyers Wants DG SSS SACKED, release of their detained four members & disband Police Rivers Re-run Panel.
The protesting lawyers and activists who marched to various embassies and Human Right Commission in Abuja today in a peaceful manner after their first attempt to hold their march was illegal disrupted by the DSS on a baseless ground late December, said their march was to stand up against the plot to overthrow the Nigerian democracy by the DG SSS and install a reign of fear and intimidation.
The lawyers under the name of Lawyers in Defence of Democracy called on the DG SSS to release their four members from his illegal underground detention facilities where he is currently holding Comrade UGO APUMAGA, IKENGA IMO UGOCHINYERE,EMEKA DIBAI &  EJIKE whose sick brother died cos of lack of money to take him to hospital).
The group also called on the House of Reps to set up a probe panel to investigate the continuous rape of the Nigerian Constitution/judicial decisions by the DG SSS and the role of the shameful Nigeria Police in the Rivers Re-Run. 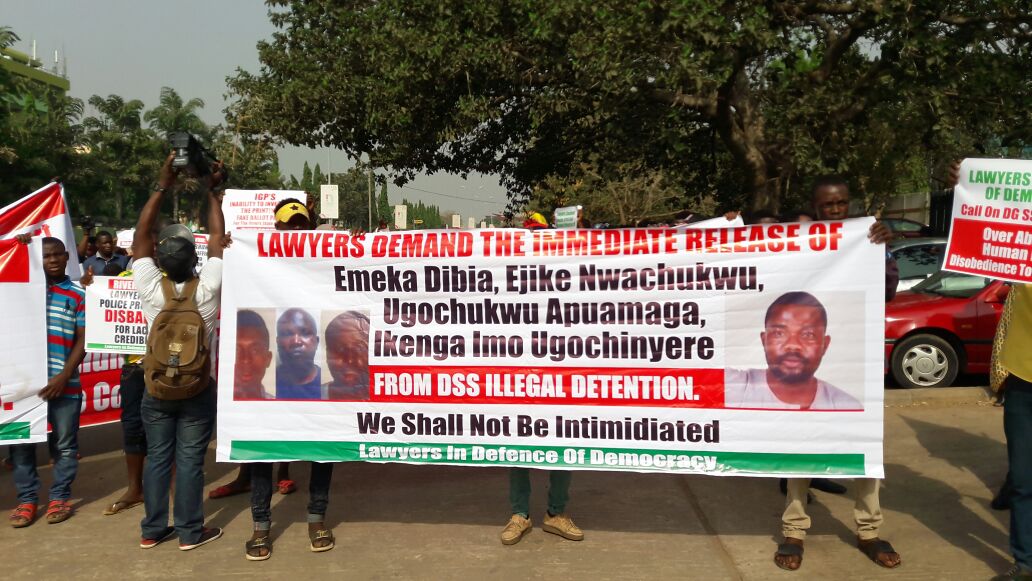 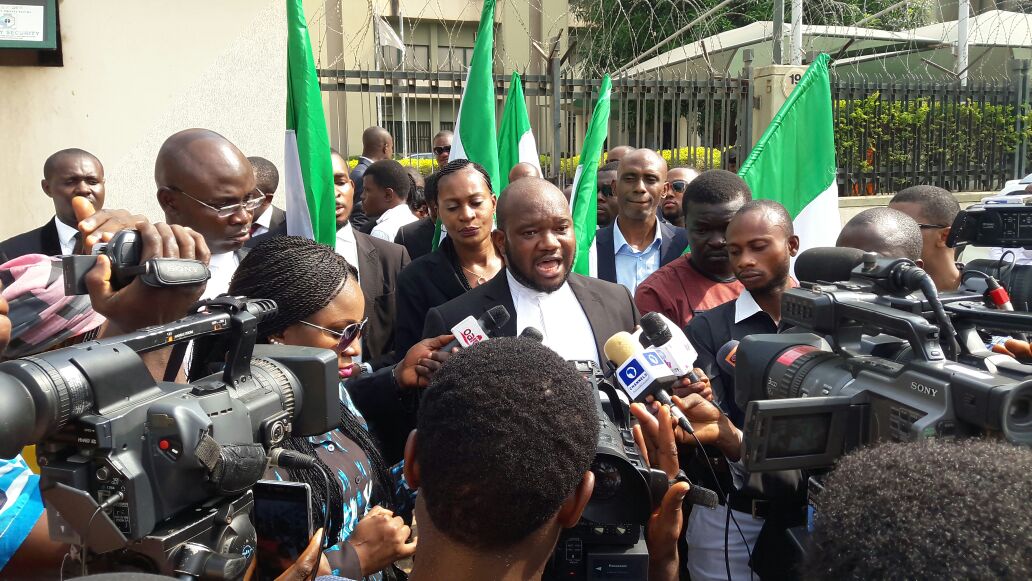 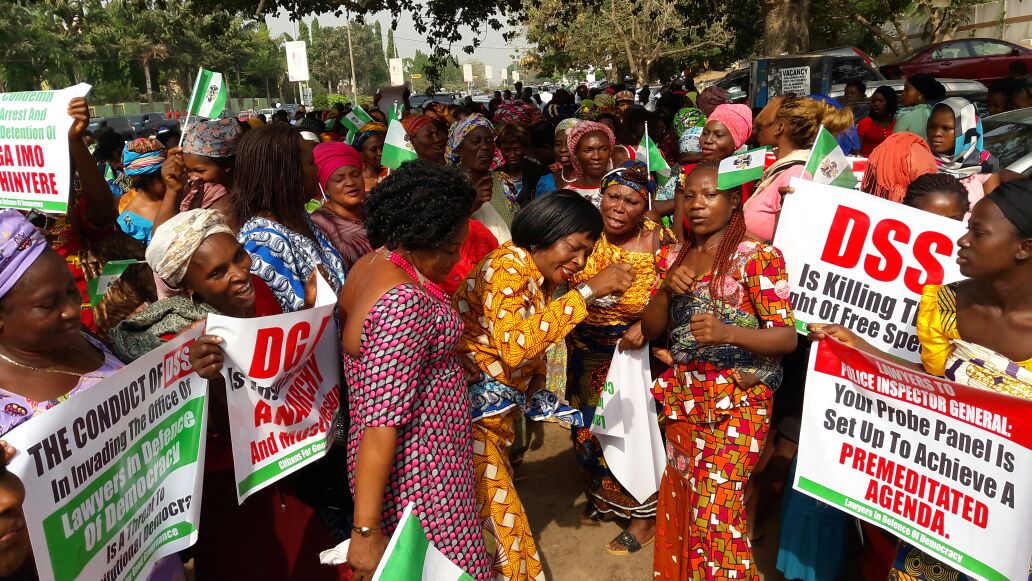 The protesting lawyers marched through major streets in Abuja today and visited the National Human Right Commission, US, UK Embassies, EU Commision etc where they submitted their petition against the growing culture of impunity led by the DG SSS
The summary of the demand of the protesters today:
It is based on the fore going that we lawyers in defence of democracy and citizens for good governance state the following:
i.) We call for the immediate release of our members who have been in DSS detention for over a month and a  return of all property taken away from our office.
ii.) We salute the gallantry of Rivers people led by Governor Wike. The will of the people of Rivers State triumphed over the rampaging forces fully backed and funded by Abuja. The gallantry of Rivers people is commended and must be emulated by the peoples of every city and state. We are in solidarity with the people of Rivers state.
iii.) That the refusal of the Nigerian Police Force to arrest the officers who participated in this dastardly act of brazen election rigging is shocking.
iv.) That the refusal of the Police to arrest and prosecute Mr. Akin Fakorede, the SARS Commandant marks the official driving of a nail through the heart of our democracy and endorsement of the end of free and fair election in our country.
v.) That the sack of the six police officers without regard to due process is selective, condemnable, ludicrous and in very bad taste.
vi.) That all politicians who have been known to have been involved in the mayhem in Rivers State be arrested immediately including Rotimi Amechi, Magnus Abe and Dakuku Peterside.
vii.) That the probe panel set up by the Inspector General of Police is unconstitutional, laughable, and ridiculous. It is a black market attempt to continue the conquest of the territory called Rivers State. The same Police that have not taken any action against those who printed fake INEC materials or apprehended those who rigged the elections are now probing a fake concocted audio tape.
viii.) We demand the immediate disbandment of the probe panel set up by the Inspector General of Police and hail the Judicial Commission set up by the Rivers State Government. Rivers people are urged to gather their facts and appear before the Judicial Commission to help it unravel the truth of what happened on 10th December, 2016.
Finally, we must all be vigilant as rule of law, free speech, democracy and credible, free and fair elections are under siege from rampaging federal forces and agents of the ruling party. At this rate, 2019 will be won on rivers of blood of citizens. We therefore urge democrats, lovers of free speech, lovers of free and fair elections, lovers of a law abiding police force to stand up and wear the political Agbada of 1983. If Pa Ajasin could resist Omoboriowo in Ondo State, if Chief Sam Mbakwe could crush the rampaging federal forces led by Collins Obi in Imo State and if Jim Nwobodo could overcome the C. C. Onoh led anti democratic forces in Enugu State then Nigerians must rise up at this time and defend our democracy.