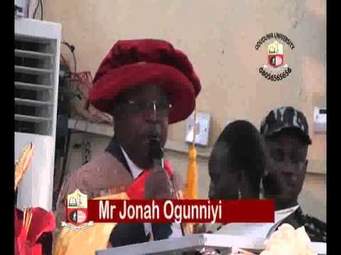 The sacked Osun State University lecturer, Dr. Bode Ojoniyi has petitioned the Chairman of Council, Yusuf Ali (SAN), calling for a review of the issues leading to his dismissal.

Until his disengagement over an alleged immoral conduct last week, Ojoniyi, was a lecturer at the Department of Languages and Linguistics, Ikire Campus.

In a first official reaction to the case on Wednesday, the newly appointed Vice-Chancellor of the Osun State owned University, Prof. Labode Popola had said that the lecturer was sacked for sexual mis-conduct.

But, in a petition addressed to the chairman of council of the school, a copy of which, was obtained by National Mirror, Dr. Ojoniyi faulted the grounds on which his dismissal was based.

He wondered why he would be sacked on the pages of newspaper without any official communication to him.

He said his sack was orchestrated by some powerful forces in the University to mask cases of result manipulations which the university authorities is investigating.

According to him, his brawl with some powerful forces in his Department and the University began when he insisted that justice must be done in a case of manipulation of results of the 400Level 2013/2014 Session of the department of Languages and Linguistics by certain lecturer in the department.

Dr.Ojoniyi stated that the lady in the purported sex video tape which the university relied upon to sack him, severally confessed before various panels set up by the institution to look into the matter, that there was neither a case of harassment, coercion, nor sex-for-marks.

He wondered why he could be accused of involvement in a case of sex-for-marks when he, at no time, taught the lady in question at any level in the institution.

His claims are contained in two separate audio recordings released on YouTube.

According to him, the first under the caption, “Dr. Bode Ojoniyi vs Prof. Alebiosu Panel – Uniosun”, reveals that there was an attempt to get Ojoniyi to agree to certain terms and to meet certain people for a settlement of some issues.

While calling on the council to institute an open enquire into the case of the alleged  ‘sex-scandal’, the embattled literary scholar alleged that the school authorities was already biased against him in its desperate attempt to cover some tracks against the evidences before them.

According to him, the manner in which the matter was dispensed with, leading to his hurried dismissal, clearly revealed a grand plan to get him out of the system at all cost without due process.

The embattled lecturer called on the visitor to the institution, the executive governor of the State of Osun, Ogbeni, Rauf Aregbesola to look into the purported sack.

In reviewing the matter, he expressed his readiness to engage all his traducers in an open debate in order to establish his innocence of the charge against him.

He said allowing the case to die with his dismissal would send a wrong signal to the whole world on the danger and futility in standing up against anything evil within the academic community.