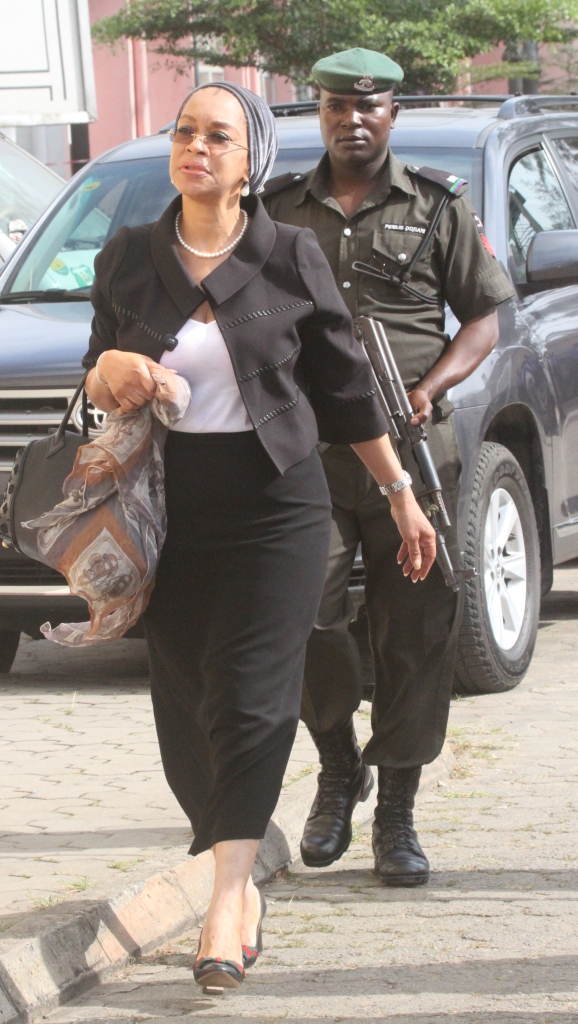 The Economic and Financial Crimes Commission, EFCC, on November 28 2016, arraigned a Federal High Court Judge, Justice Rita Ofili-Ajumogobia and a Senior Advocate of Nigeria (SAN), Godwin Obla, before Justice O.H Oshodi of the Lagos State High Court sitting in Ikeja on 30 counts of offering gratification to a public servant, unlawful enrichment, conspiracy to pervert the course of justice andgiving false information to an officer of the Commission. One of the count reads, “that you Hon. Justice Rita Ngozi Ofili-Ajumogobia and Godwin Obla SAN on or about the 21st day of May 2015, in Lagos within the jurisdiction of this Honourable court conspired with one another to pervert the course of justice in Charge No FHC/L/C/482C/10 with the sum of Five Million Naira (N5, 000,000.00) contrary to Section 97(1) of the Criminal Law of Lagos State, No. 11, 2011”.Another count reads, “that you Hon. Justice Rita Ngozi Ofili-Ajumogobia between the 11th day of August, 2011 and 27th day of March, 2012 in Lagos within the jurisdiction of this Honourable court, being a Judge of the Federal High Court enriched yourself with a total sum of Sixty Eight Thousand, Eight Hundred United State Dollars ($68, 800. 00) through your account No. 0002649223 domiciled in Access Bank Plc so as to have a significant increase in your assets that you cannot reasonably explain the increase in relation to your lawful income contrary to Section 82(a) of the Criminal Law of Lagos State, No.11, 2011”.They both pleaded “not guilty” to the charges preferred against them. In view of their plea, the prosecution counsel, Rotimi Oyedepo prayed the court for a trial date and also asked that the defendants be remanded in prison custody.However, O. Akoni, SAN, counsel to the 1st defendant opposed the prosecution’s submission that his client be remanded in prison custody. He told the court that the offences against the 1st defendant are bailable and indulged the court to grant her bail based on self recognition. Akoni also urged the court not to allow the prosecution to verify the documents of his client if bail is granted. Ifedayo Adedipe, SAN, counsel to the 2nd defendant also prayed the court to admit his client to bail. He told the court that the he (Godwin Obla SAN) had been previously granted administrative bail by the prosecution which he was faithful to. He urged the court to grant him bail based on his recognizance and on liberal terms. Responding, Rotimi Oyedepo told the court that the 1st defendant had tried to interfere with the investigations by contacting one of the proposed witnesses and urged the court to refuse the application of both defendants.Justice Oshodi however granted the 1st and 2nd defendants bail based on self recognition in the sum of Twenty Million Naira each which is to be deposited with the registrar of the court. He also ordered them to deposit their International Passports with the court. The defendants were given a 7 day ultimatum to perfect the bail conditions, otherwise bail will be revoked.Trial commenced with the prosecution presenting its first witness, Ademola Oshodi, a branch manager of Diamond Bank. Led in evidence by the prosecution counsel,Oshodi told the court that he is Justice Ajumogobia’s account manager and carried out various transactions for her.He said he used to receive monies in Naira and U.S Dollars and that he often made deposits into her Diamond bank account. Ademola further revealed that there were transactions between him andthe defendant wherein he would receive monies for her and send to her account. “Whenever there was a cash inflow of more than Five Hundred Thousand, I will keep a certain amount in my account, and forward the remaining to her account” he said.Justice Ofili-Ajumogobia, allegedly received gratifications from a public servant and also unlawfully enriched herself by receiving huge sums of money into her Diamond Bank account without reasonableexplanation. The Federal High Court Judge also gave false information to an officer of the EFCC that she was admitted at Gold Cross Hospital, Bourdillon Road, Ikoyi, Lagos which turned out to be untrue.
Obla, SAN, was also alleged to have given the sum of Five Million Naira (N5, 000, 000. 00) to  Justice Ofili-Ajumogobia in order to influence her official duties.The matter was adjourned to January 9, 2017 for continuation of trial.