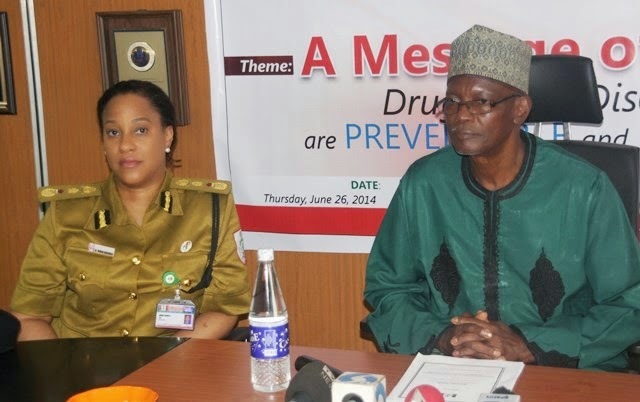 Urgent need arise for the National Drug Law Enforcement Agency (NDLEA) to benefit from the change government where  serving officer of the agency  would be given opportunity to steer the ship of that Agency to another level of development as demanded by comity of nations that are in the business of ridding off the globe of drug abuse and trafficking.

Sad to note that the outgoing chairman of the Agency, Alhaji Ahamdu Giade would have done more harm to the growth of the agency, having retired as deputy commissioner of police after 37 years of service and now 10 years down the line as the chairman of the NDLEA, where some are peddling rumour that he is seeking a third term in office at age 70. It will be a disservice to the agency if such request is granted by the presidency.

Issues relating to drug fight should be left in the hands of trained professionals as its applicable in USA, England, South Africa and Thailand, where personnel of the agency are given the opportunity to take the fight against drug abuse and trafficking, it is yielding tremendous results and placed their countries ahead of others in the global fight against drug trafficking and abuse.

Nigeria road safety corps was then bedeviled by arrays of political appointees, but with the appointment of Mr. Boboye Oyeyemi as the Corps Marshal, who grew from the rank before his appointment, leaves no doubt that recent successes recorded in that sector is unconnected with the appointment of a technocrat who transformed the corps to an envy of many government agencies in the country.

Similarly, the appointment of Mr. Ibrahim Magu, an assistance commissioner of Police as the new chairman, of the Economic and Financial Crime Commission (EFCC) leaves no one in doubt that president Muhammadu Buhari would harkens to the hue and cry of Nigerians calling for an indigenous officer to succeed the outgoing chairman, Alhaji Ahmadu Giade, who was bid to commence his retirement leave come 24th of November 2015.

On the international scene, the NDLEA was expected to rank amongst best due to its peculiar nature with unprecedented enthusiasm which ought to have been exhibited by the leadership in fighting the drug problem, has given assent to various United Nations Conventions, which set out to fight drug abuse and trafficking. Not only this, determined to redeem the image of Nigeria abroad, a lot of agreement should have been reached by technocrats to formalise cooperation on information dissemination and exchange of technical assistance should be applied where necessary.

Compounding this high tempo of frustration by the officers, research revealed that though the outgoing chairman does not possess the requisite academic qualification to man the ship of this highly technical agency of government, leaving the fate of the sector in the custody of a primary six (Standard Six) school leaving certificate holder to chair the agency for ten years, which many regarded as ten wasted years of operation in the hands of inept and poor managerial prowess.

Many felt such agency of government with intellectually and internationally demanding task of drug control Agency such as NDLEA, should henceforth be handled by men of proven character and sound academic background among the serving officers.

Furthermore, the appointment of the new EFCC Chairman did serve as reprieve where hope was not lost for the NDLEA, owing to the fact that Mr. Magu served as head of the EFCC’s Economic Governance Unit (EGU) during the tenure of Nuhu Ribadu as chairman. Though he was arrested on August 4, 2008 following allegations that police discovered EFCC files and a computer that contained classified documents at his Abuja residence but he was later absorbed of the allegations.

During his time at the EFCC, he led investigations into the affairs of officials including former Delta State Governor, Mr.  James Ibori and current Senate President, Bukola Saraki.

Among his achievement that gave him the opportunity to serve as the EFCC scribe was the assignment he carried out with the former EFCC Chairman Nuhu Ribadu, who jailed his brother-in-law and former Bank of the North chief, Shettima Bulama. Bulama was later pardoned by former President Goodluck Jonathan.

Magu is a member of the investigative committee convened by National Security Adviser (NSA), Babagana Monguno on the orders of President Muhammadu Buhari to probe the procurement of arms in the Armed Forces from 2007 till his appointment as the acting chairman of the EFCC.

In a related development, the Road safety Corps Marshal Mr. Boboye Oyeyemi’s appointment by the former president Goodluck Jonathan was a radical departure from the past where previous heads of the FRSC were appointed from outside the organization.

Until his elevation, Mr. Oyeyemi was the Deputy Corps Marshal in charge of the Corps’ operations department, whose appointment left no one in doubt that the commission was on the verge of making meaningful progress.

According to former President Goodluck Jonathan while charging the corps Marshal, said the nation expects a turnaround development stride that will rejuvenate the expected patriotism and commitment to the service by his colleagues which would engender stability of the service.
He said: “We are appointing Deputy Corps Marshal Oyeyemi as the Corp Marshal. We will expect that you will do a very good job there.

“I believe you will work with your colleagues and make sure that you don’t just maintain what Osita (Chidoka) has done but that you will also improve on that”.

A Global Village Extra investigation revealed that the presidency has started shopping for Giade’s replacement, while Speculations grew last week as stakeholders’ ears and that of the NDLEA’s staff were open to hear the replacement of their boss but nothing in that direction was heard.

However, information has it that the Presidency may have directed Giade to hand over to the most senior officer of the Agency. Which never came to past after three months In lieu of service retirement letter Alhaji Giade submitted to the presidency, but nothing has been heard from the latter, hoping that the new information making round would not be unconnected with the alleged tenure elongation being sought by the chairman, to perpetuate himself in service for another five years in office.

Sources also revealed that the non-appointment of a minister for justice and Attorney general of the federation is also said to be hindering the appointment of a new NDLEA boss.

Consequent upon the appointment of new Chairman and Director General stipulated by the act that established the Agency, Nigerians are imminently interested in the quality of personnel to take over from he duo : Alhaji Ahamadu Giade  Chairman and Roli Bode-George Director General respectively.

Insight sought to consider the appointment of a new chairman and Director General of NDLEA with unique attention paid to checkmate some of the avenues where nation onslaught to eradicate drug related crimes are expected to identify and show the world that the sincere fight against drug abuse and illicit trafficking of psychotropic substances should be handled by technocrats in the greater interest of the country.

Following are the significant attributes to be considered :

iii) Adoption of measures to eradicate illicit cultivation of narcotic plants and to eliminate illicit demand for narcotic drugs and psychotropic substances.

The giant strides of the Agency in executing its drug supply and demand reduction activities should be well acknowledged all over the world, especially by other African countries. This is informed by the fact that Nigeria is party to all the UN International drug conventions and has also entered into bilateral agreements on Mutual Legal Assistance with a number of Drug Consuming and Production countries of the world.