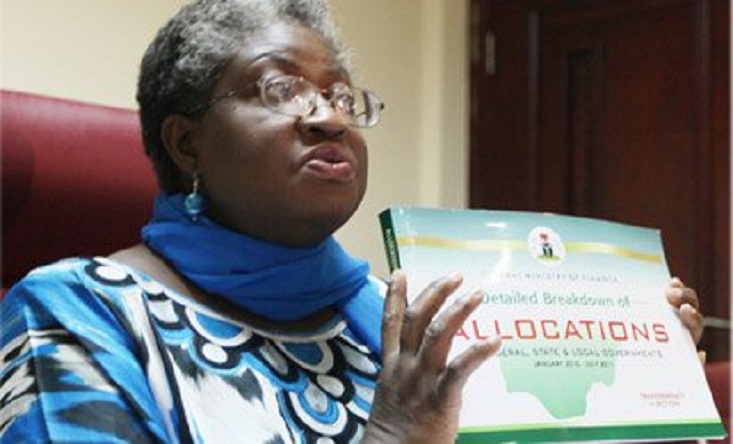 The allegation by some governors that former Minister of Finance, Dr Ngozi Okonjo-Iweala spent $2.1 billion out of the Excess Crude Account “without authorization” is false, malicious and totally without foundation.

We want to state categorically that no unauthorized expenditure from the ECA was made under Okonjo-Iweala’s watch in the Finance Ministry. Decisions on such expenditure were discussed at meetings of the Federation Accounts Allocation Committee (FAAC) attended by finance commissioners from the 36 states.

It is curious that in their desperation to use the esteemed National Economic Council for political and personal vendetta, the persons behind these allegations acted as if the constitutionally recognized FAAC, a potent expression of Nigeria’s fiscal federalism, does not exist.

But Nigerians know that collective revenues, allocations and expenditures of the three tiers of government are the concern of the monthly FAAC meetings.

It is important to acknowledge the efforts of governors who are working hard to overcome the current revenue challenges facing their states without resorting to character assassination and blame games.

The former Minister is ready and willing to respond to legitimate enquiries about issues under her purview as Finance Minister. But it is clear that this is the latest chapter of a political witch-hunt by elements who are attempting to use the respected National Economic Council for ignoble purposes having failed abysmally in their previous attempts to tar the Okonjo-Iweala name.

It will be recalled that one of such attempts took place in May when some of these governors, hiding under the auspices of the Nigerian Governors Forum asked Okonjo-Iweala to explain $20 billion alleged to be missing from the same ECA.

The Finance Ministry subsequently issued a news release and published an advertorial in national newspapers on May 25, 2015 giving details of what the Federal Government and states received from the ECA in the last four years. It also provided details of the use of the funds for payment of petrol subsidies for the Nigerian public and SURE-P allocations to the three tiers for development purposes.

After the publication, the accusers lost their voice. But the latest allegations show that these persons are still in the business of throwing up wild, unsubstantiated figures to damage Okonjo-Iweala’s name. For instance, within the last few months, Governor Oshiomhole and his fellow travelers have asked Okonjo-Iweala to account for “missing” $30 billion, $20 billion and now $2.1 billion. What they don’t seem to understand is that the strategy has lost all credibility because the falsehood is clear for all to see.

How can some governors who fought FG’s efforts to leave robust savings in the ECA and even took the Federal Government to court over the matter turn around to make such unfounded allegations?

The world knows that it was Okonjo-Iweala who pioneered, during her first stint as Minister of Finance in the Obasanjo administration, the practice of publishing monthly updates of all allocations to different tiers of government in order to empower Nigerians with information and knowledge of government revenues and expenditure. This enabled the Nigerian public to ask questions about the utilization of these resources. Of course many elected and appointed public officials were not happy with this development.

She continued this practice when she returned in 2011 and even added periodic updates on the Excess Crude Account, subsidy payments for verified claims by oil marketers for fuel imports as well as SURE-P payments to the three tiers of government.

Against this background, the idea that she spent $2.1 billion “without authorization” is simply not credible given that details of government receipts and expenditure are public knowledge.

We believe that Nigerians are too smart to be hoodwinked by this partisan desperation to tar the name of Okonjo-Iweala.

In the interest of the country, we advise that public officials should avoid the temptation to politicize economic issues so that balanced analysis can lead to real solutions.