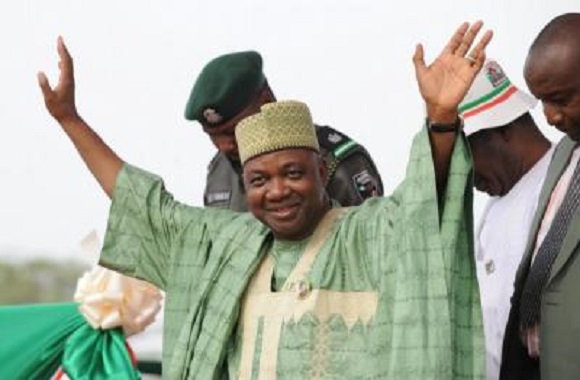 The Director General (DG), of the National Emergency Management Agency
(NEMA) Alhaji Mohammed Sani- Sidi has assured Vice President Namadi
Sambo that he would use his resources and position to reclaimed
Kachia/Kagarko Federal Constituency in court.

Sani-Sidi had earlier used thugs to disrupt elections at the APC
strong holds when he realized APC was winning which led to the
cancellation of election results in those areas by INEC.

With the failure of all the Peoples Democratic Party (PDP) candidates
in the presidential, governorship, the state and the federal house of
representative seats where Sani-Sidi is said to have come from, it was
gathered, he has vowed to use his position, resources and influence to
ensure that the courts reclaimed the seats for the PDP.

“We have gathered reliably that during a meeting of stakeholders of
PDP, the DG of NEMA, Mohammed Sani-Sidi, promised Vice President
Mohammed Namadi Sambo that he should not worry that he would used his
position to ensure that all the election won by APC in Kachia/Kagarko
Federal Constituency are upturned and declared the PDP candidates
winners,” Umar Garba said.

It was further gathered that in order to keep to his promise, the NEMA
DG has disbursed millions of Naira to the PDP candidates that lost and
hired a senior lawyer close to Vice President Namadi Sambo to pursue
the state and the house of representative cases in court.

“Sani-Sidi was a Personal Assistant to Nenadi Usman when she was
finance Minister. And when Vice President Namadi Sambo was contesting
for governorship election in Kaduna State, he went to the Ministry for
some payment because he was a contractor then and Sani-Sadi gave him
financial contribution.

“When Namadi Sambo won the election as governor, he gave Sani-Sidi
commissioner of works. He was also overseeing the Ministry of health.
When late Yakowa became governor, he made Sani-Sidi the commissioner
of special duties because he was not experienced.

“Sadi-Sidi rejected the offer, but Sambo, as Vice President, single
handedly appointed him as DG NEMA since he will be answerable to the
office of the Vice President. He had no experience in disaster
management but the aim was to “siphoned” money for their personal use
in the name of relief assistance.

“Sani-Sidi’s term has been renewed. He worked hard with Nenadi to
force good people like Jagaba out of the PDP. Now that they have lost
out in the elections both at the state and at the federal levels, he
has vowed to reclaim Jagaba’s seat for one Akuso who contested with
him. We want the world to know about the dubious plans of Sani-Sidi
who thinks it’s going to be business as usual under the Buhari’s
government,” Garba said.

Sani-Sani’s assurance to Vice President Namadi Sambo that PDP would
reclaimed constituencies clearly won by the APC candidates confirmed
an audio clip in circulation and obtained by our reporter which one
Abdulrahman Jere, a commissioner in governor Yero’s cabinet that got
Sani-Sadi’s knot, vowed Jagaba must be killed politically.

In the audio, Abdulrahman Jere, a close confidant of Sani-Sidi in the
Jere politics, vowed that they can’t afford to allowed Jagaba in the
National Assembly.

International media had reported that the Presidency had backed Mr.
Akuso heavily in the election, but Mr. Jagaba, a member of the APC,
won.

INEC officials had told some journalists that several associates of
Vice President Sambo, led by the DG NEMA and Governor Mukhtar Ramalan
Yero, had made futile efforts to stop the electoral body from
announcing the victory of Mr. Jagaba.

When contacted by a text message, Sani-Sadi forwarded same to one
Ahmed Maiyaki, the Director General to the out-going Kaduna State
governor on Media and Publicity. Ahmed Maiyaki pleaded for the story
not to be published but could not give further details.