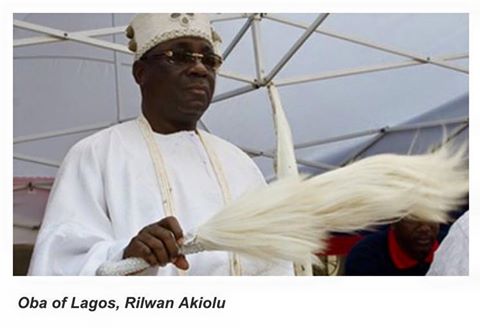 Emerging popular Igbo leader Chief Rommy Ezeonwuka who is the Ogirisi of Igbo land has joined others to lend his voice in faulting the Oba of Lagos, His Royal Majesty Oba Rilwanu Akiolu on his message to all Eze Ndigbo in Lagos that they will face death if they fail to support and vote for the candidate of All Progressive Congress APC Akinwunmi Ambode during the April 11, 2015 governorship election in the state condemning the massage as strange and dangerous..
Oba Akiolu, according to reports published in Daily Sun on Monday April 6, 2015, summoned all Eze Ndigbo in Lagos and openly told them among other things that “on Saturday, if anyone of you goes against Ambode, who I picked, that is your end, if it does not happen within seven days just know that I am a bastard and it not my father who gave birth to me”
He added “by the grace of God I am the owner of Lagos for the time being, This is undivided chair, the palace belongs to the dead and the those coming in the future, If anyone of you, I swear in the name of God, goes against my wish that Ambode will be the next governor of Lagos state, the person is going to die inside this water, ( Lagos Lagoon)”
However in what seems like a defensive measure , In a statement titled “what Oba of Lagos told Igbo leaders” signed by Chief Lateef Adribigbe Ajose, Opeluwa of Lagos, published in Vanguard, Oba Akiolu was said to have been misquoted by the press, as according to Chief Ajose, the Lagos traditional ruler only requested on the Igbo leaders to support his candidate for continuity of excellence as they had earlier promised.
But Chief Ezeonwuka, in a swift reaction described the message as totally condemnable as it is not just strange and purely anti democracy, but also a dangerous method of campaign and categorically drumbeat of war which is capable of antagonizing Ndigbo and the Yoruba into deep misunderstanding capable to cause break down of law and order in the state, noting that such a dangerous political message cannot be taken for granted.
According to the Igbo Leader who frowned vehemently with the development, the message in all entireties does not just contradicts the meaning of democracy which is known and defined as champion of freedom of views and expression to the people, but also contradicts the popular method of electioneering campaign of wooing people with juicy and favorable offers and thus, it must allowed to stand the test of time in seeing the light of the day by the relevant authorities.
“what the Oba has told Ndigbo is dangerous and strange in the history of politics in Nigeria, and it cannot be tolerated, is that how to campaign, of course it is not. And I think the Inspector General of Police should with immediate effect set up a panel of inquiry to investigate that statement and call Oba Akiolu to other. He has to recant that statement and apologize to Ndibo and the entire people of this country because he has made a serious threat to our growing democracy
“if he wants Ndigbo to vote for Ambode, let him toe a decent path of campaign by making promise, provide them with stomach infrastructure along with political offer of juicy positions for that matter, yes, because considering the investments of Ndigbo in Lagos who have made immense contributions to develop the state, there is no position that is too much for them to occupy, that is how to do campaign and not preaching death to the electorates” he continued
The Ogirisi Igbo who is a member of the Board of Trustees BOT of All Progressive Grand Alliance APGA, urged the Igbo in Lagos to remain calm and go about their normal businesses hinting that anyone who dares to pose dangerous threat against them will have the entire Ndigbo to contend with.