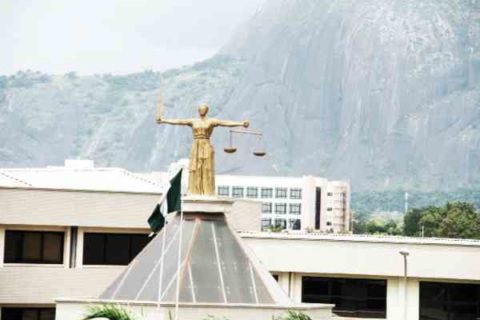 There was a mild drama at an Enugu Magistrate court yesterday as a lawyer and his client walked out of the court room, following the refusal of the presiding magistrate, Mr. F. E Chukwu, to grant their request to hands off the matter he was handling and return same to the registry for re-assignment.Defence Counsel in suit No: MEN/125/2012 – Pinnacle Oil Vs Mr. Bede Agu, Mr. Jacob Egbo, was about to move a motion for stay of proceeding when his client, Mr. Agu (defendant), stood to tell the court that he had lost confidence in the court and had instructed his lawyer to ask for transfer of the matter.Agu claimed that he overheard the prosecution witness (PW1) in the matter speaking to someone on the phone that the matter was already concluded, that everything was going on as planned.“I am not interested in this matter, and I have my doubts if I will get justice here based on the discussion I overheard.“If it is possible I will like the matter transferred. I am surprised my counsel is going on with this matter because I have instructed him to discontinue that I have lost confidence in the court,” Agu told the court.Following his client’s interjection, the defense counsel, Mr. Egbo, applied that the matter be returned to the registry for re-assignment to another court.Replying to the application, counsel to the plaintiff, Miss N. Aroh, expressed surprise with the application, arguing that there were procedures for such request.She argued that Order 16 of the Magistrate Court Rules dealt with transfer, which she said was purely an administrative duty of the Chief Judge or the Registrar.But the defense counsel insisted that he was not asking the court to usurp the functions of the Chief Judge but to return the matter to the registry since the issue of bias had been raised.“It will be preposterous for me to proceed with this matter in view of this fear expressed by my client which has not been investigated.“Your Worship you cannot wait for the CJ to exercise his power of transfer if for instance your own father is before you as a litigant.“The law requires you to return the case file to the registry for onward reassignment to another court because we are dealing with the issue of bias not the power of CJ to transfer a matter. Therefore the section cited by the plaintiff counsel does not apply in the instant case,” he said.In his ruling, the Presiding Magistrate said the application was unfounded in law, and rejected the call to return the matter to the registry.The defence counsel subsequently refused to carry on with his motion requesting to be excused so as to attend to other matters, a request that was rejected by the court.At this point, the defense counsel and the defendant walked out of the court room, even as the court continued with the matter.The matter was later adjourned to July 15.